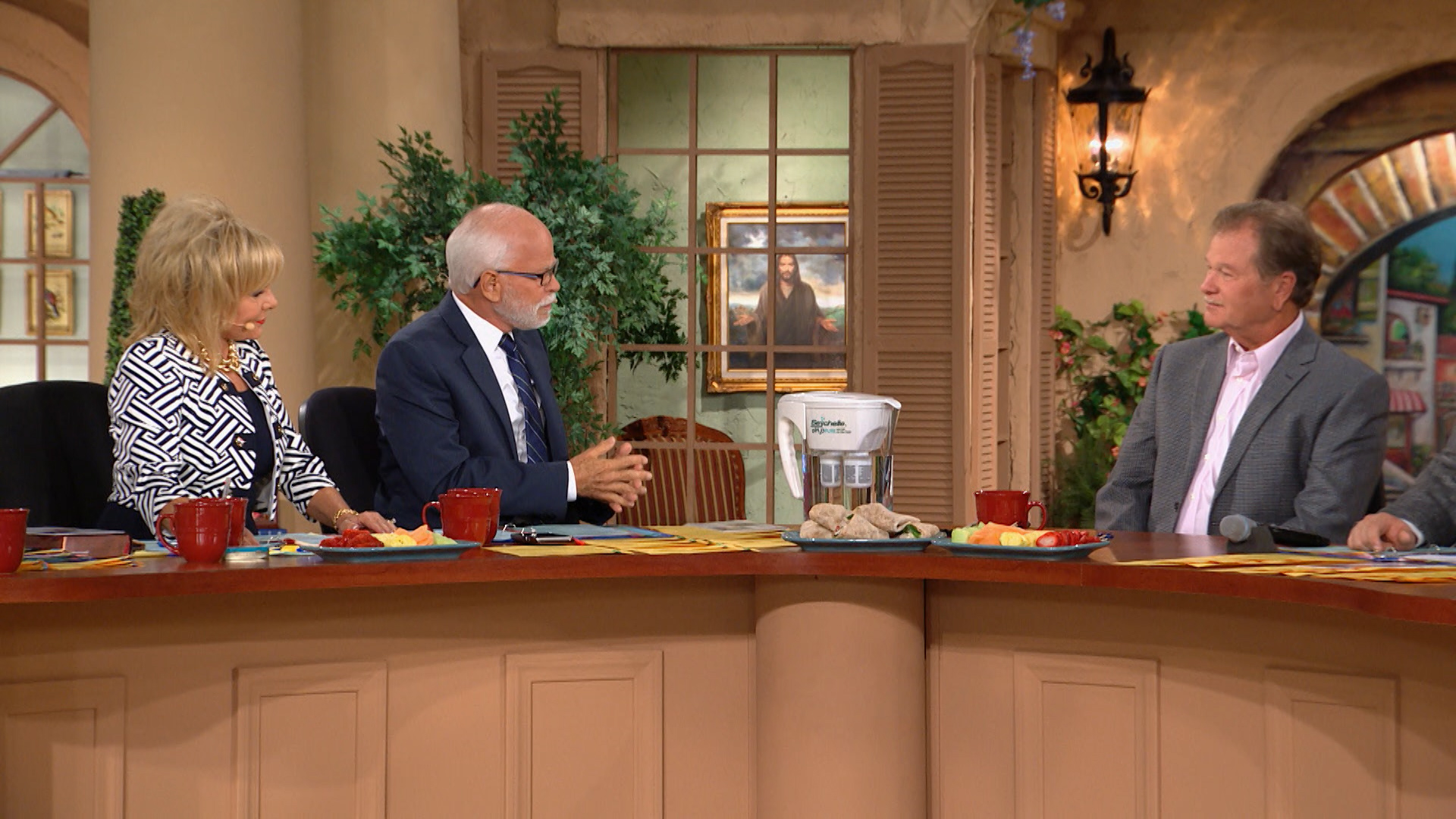 Gary Heavin, founder of Curves Fitness and Actor/Producer of the upcoming film Amerigeddon, shares some startling information both about Presidential Candidate and his Senator, Ted Cruz, as well as how the political primary system functions.

This clip is from an unaired taping of The Jim Bakker Show from April 2016.

A Chinese Christian pastor who vocally defended area churches when government officials removed crosses from buildings has been thrown in jail.

Pastor Huang Yizi was sentenced by the “People’s Court” of Pingyany County for “gathering crowds to disturb the social order.”  He was given one year in prison for the conviction.

Pastor Huang’s conflict with the local authorities was sparked by demands for the government to explain the beating of more than 50 parishioners in his government-sanctioned Fengwo Church.  The parishioners were attempting to stop the removal of a cross from Salvation Church in Pingyang.

The police stopped more than 400 Christians from attending the trial.  A witness said they stopped cars at first and then blocked off a perimeter of almost three football fields around the courthouse.

The destructions were revealed to be a government plan to stop the Christian churches from continuing their fast growth.

A family-friendly movie created by largely Christian homeschoolers is going to be released in theaters on April 6th.

The movie, “Beyond The Mask”, is a historical thriller revolving around the Revolutionary War.  An assassin for the British East India Company seeks to redeem his life by stopping a plot against the American colonies.  Through the process, he discovers faith in Christ.

The movie stars Andrew Chaney, Kara Killmer (Chicago Fire) and veteran British actor John Rhys-Davies (Raiders of the Lost Ark, The Lord of the Rings).  Rhys-Davies said he was very impressed with the 400 homeschooled students who created the film.

“I sort of like mavericks who challenge the Hollywood studio system,” he explained. “There are many subcultures in the U.S., and they always defy my expectations, and I welcome homeschoolers. I find them keen and enthusiastic, with a moral code and impressive integrity. I really liked working with them—and they made a jolly good romp of a film.”

The film’s director, Chad Burns, told The Christian Post the movie will be a quality Christian film.

“We live in a Facebook culture that is obsessed with identity—with every post and every Tweet,” he said. “People build these elaborate masks. People want to be seen as a successful student or a successful magazine editor or a successful mother—whatever the category. Jesus said that unless we’re finding our identity in Him, unless we’re resting in His finished work, we’re never going to find that satisfaction and fulfillment we’re looking for.”

Trai Byers has been given his big career break in the Fox smash hit “Empire” and says that he has to lean on his Christian faith to keep him grounded in the avalanche of attention, praise and even criticism.

Byers says that people sometimes confuse him with the character he plays on the show, which has drawn threats on social media.

“On social media and on the street people were saying, ‘If I see Trai on the street, I’m going to slap him in the face.’ Whether it’s true or not, it’s not a good thing to hear,” Byers told The Christian Post. “Ultimately, knowing God and reading the Word, it helps with patience with people, understanding, empathy and sympathy that they might not have that I have. If God gave it to me, why not exercise it?”

Byers says he believes that God has blessed him with this opportunity so he can tell others about Jesus.

“I know a part of my journey now, the reason I’m an actor now, the platform that I have now. I’m supposed to share the Lord with people. All of us are disciples on some level,” he told CP. “You don’t have to be behind the podium to tell a story, connect with people and share the Gospel.”

However, Byers is quick to point out that before he received this opportunity, he struggled with his faith during the hard times.

“I felt success on me, and I was wondering why it wasn’t manifesting itself in the way I thought it would. And it was just a war between flesh and spirit. But ultimately, God got me to a place where I delved deeply into the Word,” Byers explained. “I’ve read the Bible before, a couple of times cover to cover. Some things stuck with me and some things didn’t, but it was time for me to really get to know God.”

He said that Psalms 117 and 118 along with Matthew 6 have been great bedrocks in the rebuilding of his faith.

A group of Islamic extremists attacked a Christian church in Egypt because the church planned to honor 21 Christian martyrs killed by the extremist group ISIS.

“I called the police many times and asked them to come to guard us but they came late and after their arrival they didn’t guard the church. They stopped in the entrance of the village. Even still they allowed the cars of the attackers to enter the village and attack us and the church without any intervention from them to protect us,” Fr. Makar Issa told the International Christian Concern.

Daily News Egypt reported that the attackers are connected to the Muslim Brotherhood, the former political party that is now outlawed in the country as an Islamic terrorist organization.

The Virgin Mary Church is the only Christian church in Al-Our for the village’s 2,500 Christians.

“They shot guns at the church and pelted the church with stones and blocks,” Fr. Issa said.

A huge earthquake off the coast of Papua New Guinea generated a small tsunami.

The magnitude 7.7 earthquake struck around 30 miles southeast of Kokopo at a depth of 40 miles. The Pacific Tsunami Warning Center warned of a potential 3 foot high tsunami but the highest reported wave was 1.5 feet in the harbor of Rabaul.

Rabaul residents say there was no major damage and most of the water flooded parking lots near the beach or seaside. Store owners say that items were knocked off shelves but there was no structural damage.

Residents say the tremor lasted about five minutes and was so intense that residents fled into the streets from fear of building collapse.

Miraculously, officials say there were no reports or deaths or injuries from the massive quake.

Papua New Guinea lies on the Pacific “Ring of Fire”. Volcanic and earthquake activity is common in the region.

A Christian school has won a legal battle with two teachers who sued the school after their contracts were not renewed because they refused to provide proof they were Christians.

Little Oaks Elementary Schhol, owned by Calvary Chapel of Thousand Oaks, California, requires all teachers to complete a form that affirms their faith in Christ as part of their teacher contracts.  Two teachers, Lynda Serrano and Mary Ellen Guevara, refused to submit the document.

The document requires among other things a pastor attesting to their church attendance and their Christians beliefs.

The women claimed they were being discriminated against because they refused to sign the papers.

Ventura County Superior Court Judge Henry Walsh sided with the school saying that the teachers served in a ministerial capacity when they were working within the school.  That meant the school can require proof of faith as a condition of employment.

“We are grateful that this Court has chosen to protect the liberty of Little Oaks School,” commented attorney James Long in a press release on Wednesday. “It only makes sense that a Christian school has the constitutional right to require that its teachers provide a reference from a pastor.”

Republicans in the New York State Senate are expected to block a bill from the state Assembly that would expand abortion into the third trimester.

“The state shall not deny a woman’s right to obtain an abortion as established by the United States Supreme Court in the decision Roe v. Wade,” the bill reads. “Notwithstanding any law to the contrary, New York protects a woman’s right to terminate a pregnancy within 24 weeks from commencement of her pregnancy, or when necessary to protect a woman’s life or health as determined by a licensed physician.”

The bill had been part of a “women’s equality” bill but was separated into a stand-alone bill.

The head of New York State Right to Life told LifeNews that the bill shows the power of the abortion lobby in the state.

“Expanding cruel and brutal third-trimester abortions has long been a goal of the anti-life lobby who never met an abortion they didn’t like,” Lori Kehoe, New York State Right to Life executive director, told LifeNews. “With no regard for the fully developed unborn baby who is violently dismembered, or otherwise killed, the New York State Assembly once again put the abortion lobby above New York State women and their children.”

The city government of Irving, Texas is standing up and saying sharia law is not going to be legal within the bounds of their city.

A Sunni mosque in Irving had announced earlier this year they were forming an Islamic Tribunal to provide mediation of disputes in the Muslim community according to Sharia Law.  Now, the city has passed a resolution backing a Texas House Bill that would forbid the use of “foreign law” to decide issues within the city.

Irving Mayor Beth Van Duyne has been the subject of hate from the Muslim community because of her bold stand against Sharia Law.

“As Mayor of the City of Irving, I took an oath to uphold the laws of the State of Texas and the Constitution of the United States,” Duyne wrote earlier this year. “American citizens need to remember that their rights are guaranteed by the Constitution and I believe no one should subjugate themselves to anything less.”

However, she says this new law is not aimed at religion of any kind.

“This bill does not mention at all Muslims, sharia law, Islam, even religion,” Duyne stated.

Duyne said that she would work to fight for anyone whose civil rights is violated in any way by people connected to the “Tribunal”.

The Pentagon has declassified a Defense Department document that reveals the extend of the Israeli nuclear program.

The release breaches an agreement between the two nations to not reveal Israel’s nuclear ability.

The move is seen as retribution by the administration toward Israel for Prime Minister Netanyahu’s address to Congress.  The document revealed Israel’s capabilities while blocking out the sections on the document related to France, Italy, West Germany and NATO nations.

The report states that Israel is “developing the kind of codes which will enable them to make hydrogen bombs. That is, codes which detail fission and fusion processes on a microscopic and macroscopic level.”

The document says that Israel’s ability is “an almost exact parallel of the capability currently existing at our [American] National Laboratories.”

The release is the first time the United States has confirmed that Israel is a nuclear power.