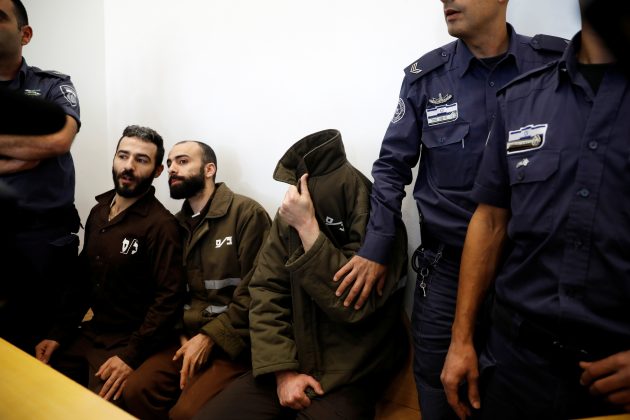 Romain Franck, an employee of the French consulate-general in Jerusalem, appears with co-defendants in the district court in Beersheba, Israel, March 19, 2018. REUTERS/Amir Cohen

JERUSALEM (Reuters) – Israel said on Monday it had arrested a French citizen, an employee of France’s consulate in Jerusalem, on suspicion of using a diplomatic car to smuggle guns from the Islamist Hamas-controlled Gaza Strip to Palestinians in the occupied West Bank.

Held since Feb 15, Romain Franck is accused of moving a total of 70 pistols and two assault rifles between the Palestinian territories on at least five occasions, the Shin Bet security agency said after a gag order on the case was lifted.

Franck “acted for financial profit, on his own initiative and without the knowledge of his superiors,” a Shin Bet statement said. He is not believed to have also had an ideological motives such as support for Palestinian militants, a Shin Bet official told Reuters.

“This is a very serious incident in which the immunity and privileges granted to foreign diplomatic missions in Israel were cynically exploited to smuggle dozens of weapons that may be used for terrorist attacks against Israeli civilians and security forces,” the statement said.

Franck, 23, was due to appear at a 1230 GMT Israeli court hearing at which formal charges would be filed. His lawyer could not immediately be reached for comment on how Franck might plead.

A Facebook page under the name Roman Franck, and carrying photographs that looked similar to the mugshot published by the Shin Bet, shows images of the young man against desert vistas.

A Jan. 17 posting said the Facebook account-holder was “traveling to Jerusalem starting to (sic) a new adventure”.

A spokesman for the French Embassy in Tel Aviv described Franck as “a member of the consulate-general in Jerusalem” and said France was taking the case seriously and cooperating with Israeli authorities.

Franck was arrested along with a Palestinian from East Jerusalem employed as a security guard at the consulate as well as seven other suspects, the Shin Bet said.

It accused him of using a consulate-owned sports utility vehicle, which enjoyed more cursory Israeli security checks due to its diplomatic status, to bring the factory-produced guns from Gaza to Palestinian arms dealers in the West Bank.

According to the Shin Bet statement, Franck received the guns from a Palestinian employed by the French Cultural Centre in Gaza. It could not immediately be reached for comment.

Most countries keep their embassies to Israel in Tel Aviv, as well as consulates in Jerusalem that handle diplomatic outreach to the Palestinians.

Israel counts all of Jerusalem as its capital, a status not recognized abroad although the United States, breaking with other world powers, plans to move its embassy in Israel to the city in May.

Palestinians want East Jerusalem as the capital of a state they seek to establish in the West Bank and the Gaza Strip.