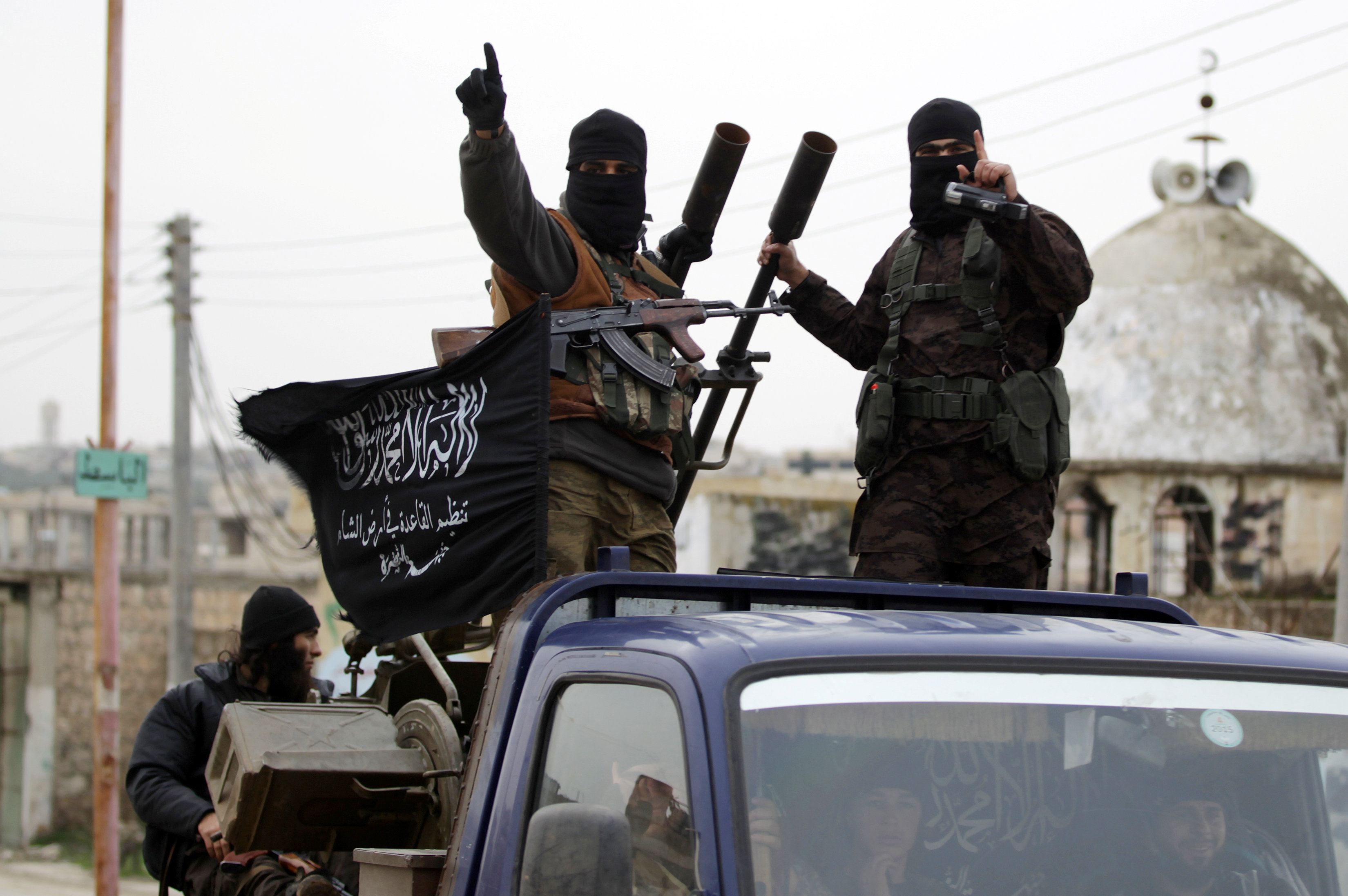 BEIRUT (Reuters) – The war has cost one man part of his liver and intestines. Another his home and work. A third his homeland and studies.

All three have lost hope.

Abu Farhan, Fouad al-Ghraibi and Abu al-Baraa took the rebels’ side in the violence which began after the government put down street protests that started on March 15, 2011. 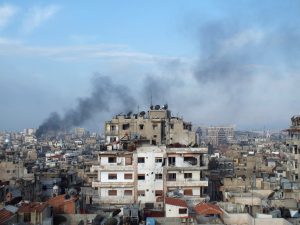 FILE PHOTO: Smoke rises from one of the buildings in the city of Homs, Syria March 11, 2013. REUTERS/Yazan Homsy/File Photo

Ghraibi, who has a business renting out construction machinery, joined a rebel group and later set up his own fighting unit. Abu al-Baraa, then just 16, joined a militant group, the Nusra Front, and became a jihadist fighter. Abu Farhan, a student and part-time kitchen fitter, joined the first protests in the central Syrian city of Homs and went on to became an opposition activist.

The harrowing tales of the three men — they don’t know each other but all risked their lives by siding against President Bashar al-Assad — help show why the rebellion is failing.

All three quickly became disillusioned with divisions among the rebels and what they saw as various fighting groups’ intolerance of anyone who does not think like them — a trait similar to what they see in Assad.

Two of them have concluded the war is unwinnable, especially as Assad now has heavy military support from Russia and Iran that far outweighs the weapons shipped to rebels by the United States, Gulf Arab states and Turkey.

But hatred of Assad means fighters like Ghraibi battle on. Men such as Abu al-Baraa and Abu Farhan are so disillusioned with both sides that they see no life for them in Syria.

“What happened destroyed my whole future,” Abu al-Baraa, who now lives in exile in Turkey, told Reuters by telephone. He fled across the border after falling out with the Nusra Front, which he says imprisoned and tortured him.

Ghraibi, 37, has recovered from abdomen and hand wounds and lost part of his liver and intestines, and a finger, says he will fight to the death with the rebels but also believes the rebellion’s original ideals are dead.

“We’ll keep fighting to our last breath, even against the whole world,” he said. 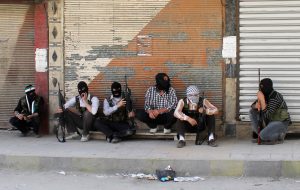 Abu Farhan shares that sense of despair. Now 30, he was forced out of Homs by the fighting in 2014. Although he has found work and an apartment in Syria’s northern Idlib province, he is deeply disillusioned by what has become of Syria and dreams of leaving to start a new life abroad.

“We didn’t want to destroy our country and create this rift among Syrians,” he said. “If I could go back in time, I wouldn’t have joined the protests.”

He asked to be identified only by his nom de guerre for fear of upsetting rebels in Idlib.

The civil war has killed 511,000 people, according to the Syrian Observatory for Human Rights, and forced over 5.4 million to flee the county, according to U.N. data. It has also caused a refugee crisis in neighboring countries and western Europe and inspired fatal attacks from Nice to Los Angeles.

It is a civil war that has laid bare the international community’s inability to resolve conflicts on such a scale, increasing strains between Russia and the West.

Abu Farhan had studied physical education at university in Homs before the war and was working as a kitchen fitter. He threw his lot in with Assad’s opponents when he joined anti-government protesters pouring out of the Khaled bin al-Walid mosque in Homs.

Abu Farhan put aside his studies and his hopes of marriage, and began organizing protests.

His best friend and favorite cousin both disappeared under arrest. Last year he found out that they were killed – a fate which human rights groups say has befallen tens of thousands in Assad’s prisons. The president denies the accusations.

By February 2012, the Syrian army was regularly shelling the district where Abu Farhan lived in the Jouret al Shayyah district of Homs near the Old City. But he chose not to fight.

“I knew that taking up arms would be a curse, not a blessing,” he said.

As fighting intensified and warplanes began bombing city blocks in late 2012, he left his home with his parents and two siblings for al-Waer, a quieter opposition area in another part of the city.

Waer was soon subjected to a siege that lasted until 2017 and food became more scarce. During Ramadan, the Muslim holy month when people traditionally eat delicacies at night after fasting through the daylight hours, he says the family usually had only bulgur wheat to break their fast.

“Sometimes we didn’t even have that,” he said.

Terrified of arrest by Assad’s security forces – which he believed would lead to torture and summary execution – Abu Farhan and his family joined rebels who left for Idlib in a negotiated withdrawal, surrendering Waer to the government.

Idlib will never feel like home for Abu Farhan. “I am a refugee here,” he said.

After leaving Waer, he and his sister both found jobs in Idlib, with Abu Farhan working as a fitness instructor.

Despite overcrowding caused by the flood of refugees from other parts of Syria, they were able to rent an apartment. For now, though, Abu Farhan is unable to get to work in the southern part of Idlib because bombing by pro-Assad forces makes his journey too dangerous.

The bombing, destruction and what he sees as the intolerance of rebel groups running Idlib have convinced him there is no point staying in Syria. He has started learning Turkish and hopes to gain refugee status.

Abu al-Baraa was a schoolboy in Waer when the protests began, but volunteered as a hospital orderly and helped injured demonstrators hide from the police. He briefly became a medical student, while it was still possible to travel into the university in central Homs.

Realising he was now a wanted man because of his actions, he joined the Nusra Front. He said the group seemed to represent his conservative religious views and that he became aware of its true nature and violent militancy only later.

“We didn’t know then that the Nusra Front was affiliated to al Qaeda. We had a religious upbringing, and they lured us in with their religious beliefs,” said Abu al-Baraa.

The Nusra Front’s brutal methods were soon evident to Abu al-Baraa, as was the split between jihadist and nationalist groups that has plagued the uprising.

“They established security apparatuses and prisons just like the (Assad government) regime, where they tortured people,” Abu al-Baraa said. “I know of at least one man who died under torture and was later shown to be innocent.”

After only a few months fighting with the group, he was stripped of his gun and mobile phone for opposing its actions and he started volunteering at a medical center.

His disillusionment with the Nusra Front and other rebels grew and he publicly argued with the group’s local commander, who threw him into prison.

He was held in a dark underground cell infested with rats and was tortured, he said.

“They faked 15 accusations against me, including theft and spying for the regime. After 12 days of living hell, I collapsed and confessed to the fake accusations,” he said.

While he wasted in prison the rebellion, undermined by internal wrangling and facing a government strengthened by the arrival of Russian warplanes, was losing ground.

When its enclave in the city of Aleppo fell to Assad in late 2016, it led to a series of surrenders of other small opposition pockets around Syria. Waer was one of them.

Abu al-Baraa was stuck in prison, but he still had friends in the Nusra Front who managed to smuggle him out. He was able to board one of a number of green buses sent by the government to evacuate the rebels, and made it to Idlib.

For Abu al-Baraa, worried he was in danger from the Nusra Front and now using false documents, the misery and poverty of Idlib offered no haven.

Six weeks after arriving there, he made the dangerous border crossing into Turkey with the help of the same people who had rescued him from prison. It was his seventh attempt.

Mow living in Istanbul with his mother and younger brother, Abu al-Baraa says the trauma of that time, when the sound of jets meant an attack could be imminent, still affects them.

“We live near the airport. Whenever a plane takes off or lands, my brother runs crying to his mother,” he said.

Their father did not make it out of Syria. He died of a stroke in Waer in 2014. Abu al-Baraa still fears his former rebel allies enough to be identified only by his nom de guerre.

When anti-government protests began in the city of Idlib in 2011, Fouad al-Ghraibi quickly joined them.

There was never any question where his allegiances lay. Thirteen of his uncles and cousins, all from the family’s home village of Kafr Oueid in Idlib province, were killed or jailed when government forces crushed a years-long revolt by the Muslim Brotherhood, an Islamist organization, in 1982.

Ghraibi was shot in the hand and abdomen when Assad cracked down on the protesters and was taken to Turkey for treatment.

Returning to Idlib months later, he gathered friends to join the Free Syrian Army (FSA), an alliance of rebel groups backed by Western and Arab countries.

Disappointed by divisions in the FSA, he later joined Jaish al-Islam, a better organized Islamist coalition backed by Saudi Arabia where he was put in charge of 150 fighters.

Three of his brothers, Mokhlis, Khaled and Mustafa, were killed in combat in the northwest, scene of some of the fiercest fighting of the war. An air strike on his village in June 2015 killed 33 civilians, including his niece.

When an alliance of jihadist groups led by the Nusra Front, which changed its name in 2016, took over much of Idlib last year, Ghraibi returned home to Kafr Oueid.

Once there, he set up a group of 45 local fighters which he hopes will defend the village from both Assad and the Islamist factions, and return the revolution to the ideals he believes it originally espoused.

All it has done so far is contribute yet another small armed faction to a civil war that shows no sign of ending.