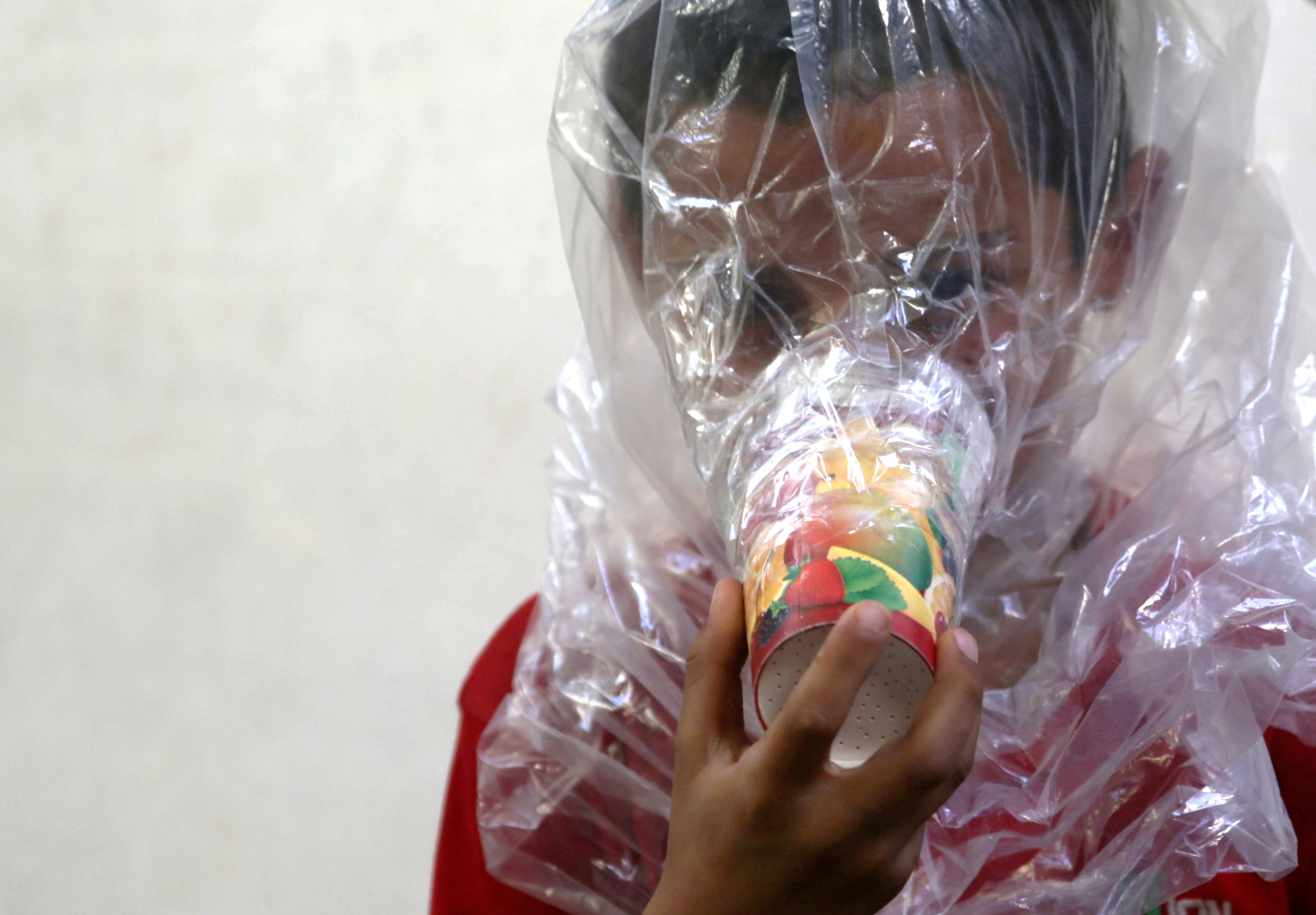 IDLIB, Syria (Reuters) – Hudhayfa al-Shahad strapped a colorful paper cup filled with cotton and charcoal to a child’s face and tightened a plastic bag around his head: an improvised gas mask if chemicals once again fall on Syria’s Idlib.

Civilians in Syria’s last major stronghold of active opposition to President Bashar al-Assad’s rule are preparing food and digging shelters ahead of an expected army offensive.

They are also putting their faith in neighboring Turkey’s diplomacy to spare them from military action, which could become a humanitarian disaster.

“We are preparing what little we can: small primitive masks we can place on our children’s mouths in case we are hit with chemicals,” 20-year-old Shahad told Reuters from his village south of Idlib city, where he shares a house with his pregnant wife, three children and around 15 other people.

His brother, 35-year-old construction worker Ahmed Abdulkarim al-Shahad, shows off the cavernous space under a cool, vine-covered courtyard the family has been digging and sheltering in from bombardment since 2012.

“Military preparations as we have seen are in full swing … We as civilians have started preparing the caves,” he said, showing glass bottles of pickled vegetables shelved on the damp cave walls.

Around 3 million people live in the rebel stronghold in northwest Syria, which comprises most of Idlib province and adjacent small parts of Latakia, Hama and Aleppo provinces.

About half of them fled fighting or were transferred there by the government under surrender deals from other parts of Syria as Assad has steadily taken back territory from rebels.

In April last year, a government warplane dropped sarin on Khan Sheikhoun in Idlib, killing more than 80 civilians, the U.N. Commission of Inquiry has said. It also said Syrian forces have used chemical weapons, including chlorine, more than two dozen times during the war.

Damascus and its ally Russia both deny these charges and say they do not engage in chemical warfare. Idlib residents are fearful and Washington has warned Assad against using chemical weapons in any offensive, promising a response if he does so. 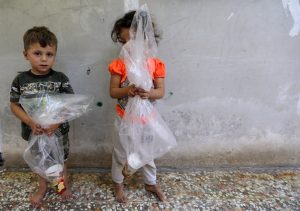 Children hold plastic bags with a paper cup in them, in Idlib, Syria September 3, 2018. REUTERS/Khalil Ashawi

Russia, Assad’s ally, resumed air strikes against insurgents in Idlib on Tuesday following weeks of bombardment and shelling by pro-Syrian government forces in an apparent prelude to a full-scale offensive against the last major rebel enclave.

But Turkey has said it hopes a summit with Iranian and Russian leaders in Tehran on Friday will avert an offensive.

And some people Reuters spoke to in Idlib suspected an offensive may be avoided.

“I do not believe there will be an attack on Idlib. It’s all a media war,” said 50-year-old former construction worker Jaafar Abu Ahmad from a rural area near Ma’arat al-Nuaman town. “The great world powers have pre-agreed on us and divided the land.”

Nevertheless, seven years of grinding war have taught Ahmad to be prepared. His family is currently expanding a damp dugout they have been digging and sheltering in from strikes for the past five years, stocking it with food.

“We have been digging in the earth for two months non-stop, me, my wife and children,” he said. “This cave is now our protection. We cleaned it recently after it had been neglected for a long time.” 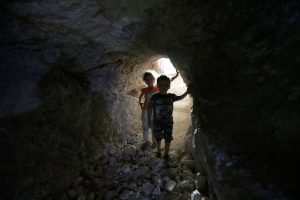 Children walk in a makeshift shelter in an underground cave in Idlib, Syria September 3, 2018. REUTERS/Khalil Ashawi

With shelling, air strikes and rhetoric about an impending offensive increasing, a number of local councils across Idlib have come together and asked Turkey for protection.

“For us in the liberated areas our only guarantor in negotiations is our Turkish brothers,” said Ahmad Shtaam al-Rashu, the 48-year-old head of Ma’shureen village’s local council.

Turkey has erected observation posts along the frontlines between rebels and government forces, and Rashu said Turkey had told them this was a sign of its commitment to protect the people of Idlib.

Idlib is often described as the “last refuge” for rebels and internally displaced civilians, and any offensive threatens new displacement and human misery.

“As for escaping toward the (Turkish) border, I don’t believe we will move from our houses. The bombardment will get us. There is no place left after Idlib,” said Ahmed al-Shahad.

“We will fight to the last man, we no longer have any option.”

(Reporting by Khalil Ashawi in Syria; Writing by Lisa Barrington in Beirut; Editing by Gareth Jones)