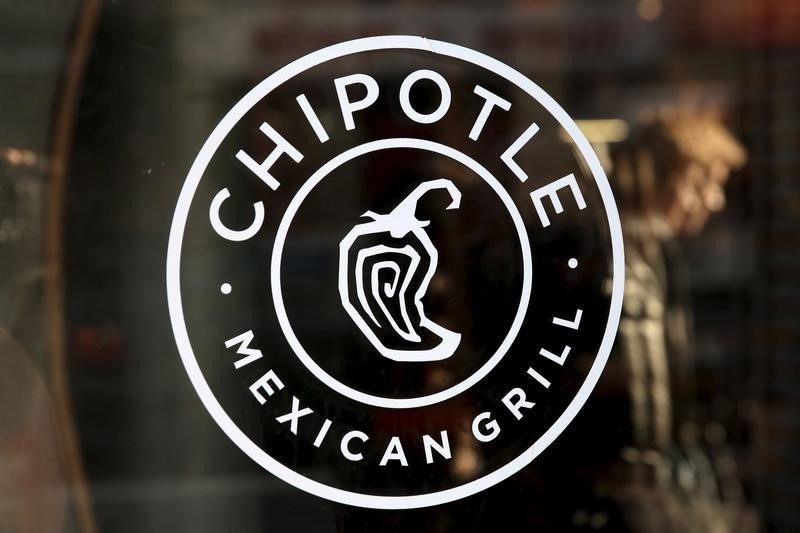 (Reuters) – Chipotle Mexican Grill Inc <CMG.N>, under scrutiny for months over outbreaks of foodborne illness across several U.S. states, said on Wednesday it was served with a subpoena in a federal criminal probe linked to a norovirus case in California last year.

Shares of the burrito chain fell more than 5 percent to $424.95, their lowest in more than two years, as the Denver-based company grapples with a wave of norovirus and E. coli outbreaks that have sickened customers and battered sales.

The company in a filing also projected a 14.6 percent plunge in fourth-quarter same-store sales, compared with a previously estimated 8-11 percent drop, which would be the first such decline in the company’s history.

Chipotle said it received the subpoena as a part of a criminal investigation by the U.S. Department of Justice and the Food and Drug Administration. A federal grand jury will decide whether to press charges in the case.

Norovirus is the leading cause of food-related illnesses and outbreaks in the United States, often occurring when infected restaurant employees and food workers touch raw ingredients before serving. The highly contagious virus can cause vomiting and diarrhea.

The investigation announced on Wednesday is the latest headache for the company, which has seen sales slump after an E. coli outbreak sickened more than 50 people in nine states in October and November.

That outbreak was followed by a norovirus incident at a restaurant in Brighton, Massachusetts the week of Dec. 7, in which 120 Boston College students fell ill.

Chipotle said the subpoena was served in December. It requires the company to produce a broad range of documents related to the August norovirus incident at its restaurant in Simi Valley, California, which sickened more than 200 people, including 18 workers.

In September, two California residents sued Chipotle for damages in U.S. court after they said they became sick from eating at the Simi Valley location.

Alyssa McDonald vomited repeatedly, developed “explosive diarrhea,” and suffered chest pains after eating at restaurant, according to court documents. Another customer said she had to go to a hospital emergency room for days.

Ventura County health official Doug Beach said his office was interviewed by the FDA and U.S. Attorney’s office in the fall. Authorities, he said, focused their lines of enquiry squarely on Chipotle.

A federal investigation into a one-restaurant outbreak is surprising since there wasn’t a clear interstate element, said Bill Marler, a Seattle-based lawyer who is representing customers saying they were sickened in Simi Valley.

Chipotle said same-store sales were trending down 16 percent at the onset of December but fell 34 percent after the Brighton incident and the subsequent national media attention it garnered.

Overall same-restaurant sales for December were down 30 percent, the company said.

Any more incremental bad news, particularly if there is an unfavorable decision from the grand jury, could trigger consideration among shareholders of a management change, Maxim Group analyst Stephen Anderson said.

The company, which also announced a $300 million share buyback, said it will fully cooperate with the probe.

The company’s shares have fallen nearly 30 percent since Oct. 31, when the first E. coli outbreak was reported.

(Reporting by Siddharth Cavale and Subrat Patnaik in Bengaluru, Sarah N. Lynch in Washington, and Tom Polansek in Chicago; Writing and additional reporting by Eric M. Johnson in Seattle; Editing by Don Sebastian and Meredith Mazzilli)