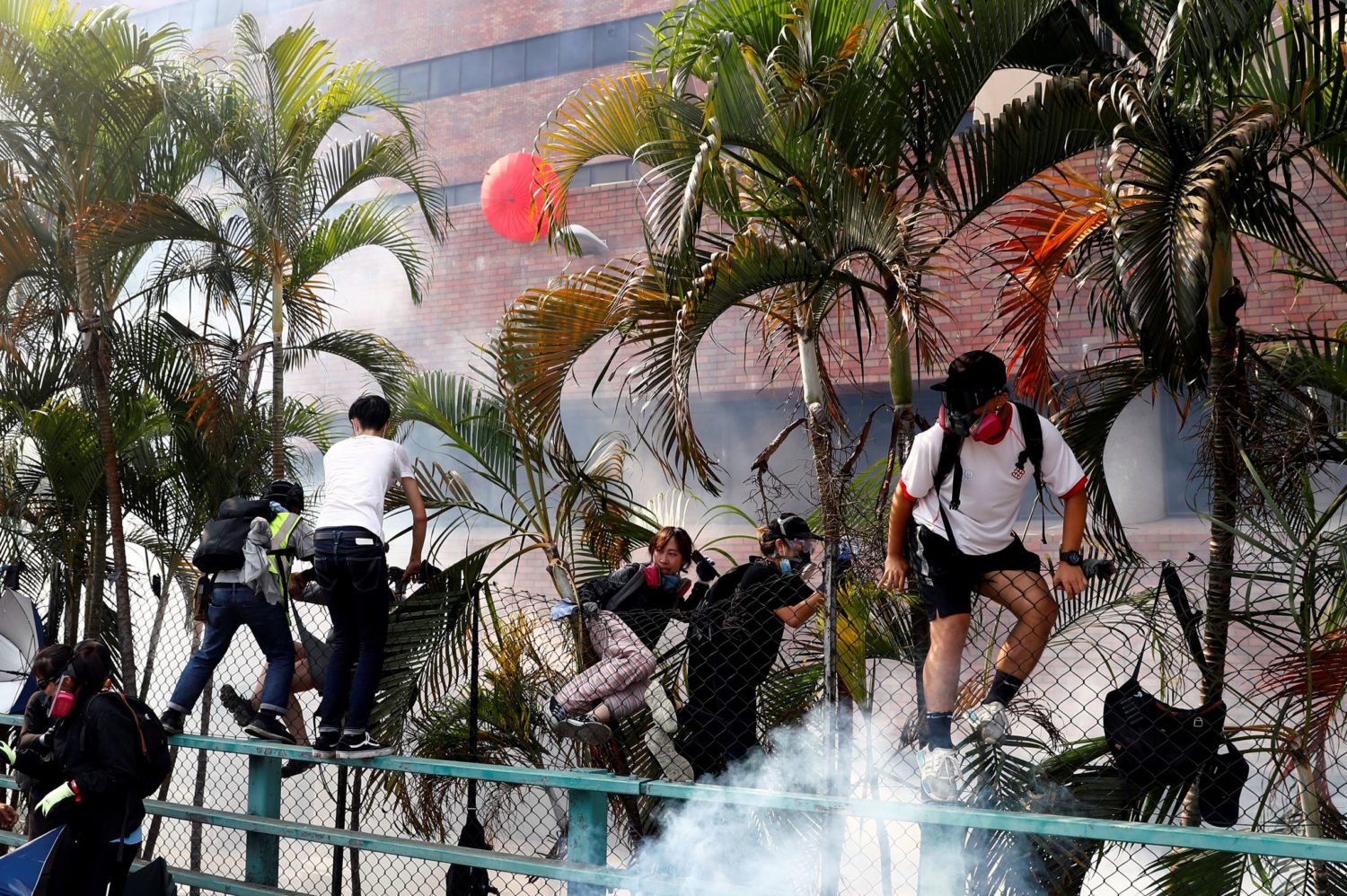 HONG KONG (Reuters) – Dozens of Hong Kong protesters staged a dramatic escape from a university campus sealed off by police on Monday by shimmying down plastic hosing from a bridge and fleeing on waiting motorbikes as the police fired projectiles.

Many more anti-government protesters remained trapped inside the Hong Kong Polytechnic University, and two prominent figures were allowed by police onto the campus late on Monday to mediate, a sign that there is a growing risk of bloodshed.

“The situation is getting more and more dangerous,” Jasper Tsang, a pro-Beijing politician who is the former head of Hong Kong’s Legislative Council, told Reuters soon after he arrived at the campus.

As he spoke, big explosions were heard and flames flared up at a distant part of the campus. In streets nearby, protesters rained down petrol bombs, burning parked cars and the front of a Standard Chartered Bank branch.

Polytechnic University in the Kowloon district of Hong Kong is at the center of a standoff in the past week that has seen the most intense violence in five months of anti-government demonstrations.

Some of the protesters who escaped on Monday lowered themselves about 10 meters from a bridge they had occupied on the campus to a flyover below. They then sped off on the back of motorcycles which were already waiting or quickly arrived.

A number of them appeared subsequently to have been arrested, a Reuters witness said.

Other protesters, hurling petrol bombs, tried repeatedly to break into the campus but police fired tear gas and water cannon to push them back.

The size of demonstrations has dwindled in recent weeks, but clashes have worsened since early last week, when police shot a protester, a man was set on fire and the city’s financial district was filled with tear gas in the middle of the workday.

The city’s hospital authority reported 116 injuries on Monday, including one female in serious condition.

Earlier on Monday, police tightened their cordon around the Polytechnic University and prevented dozens of people breaking through police lines.

“If the police decide to come in by force, to make their arrests then there will be very strong resistance from the protesters, and we’re afraid we may see bloodshed. This is something that we want to avoid,” Tsang said.

Tsang, who with legal scholar Eric Cheung was the first prominent mediator let onto the campus by police, said there were young children and elderly people trapped inside and that it was a priority to get the children out first.

Early on Tuesday, about 20 students accompanied by Tsang left the campus voluntarily, broadcaster RTHK reported on its livestream.

Police said officers had been deployed “on the periphery” of the campus for a week, appealing to “rioters” to leave.

Witnesses estimated there were more than 300 people still on the campus as of late Monday.

Demonstrators are angry at what they see as Chinese meddling in Hong Kong’s promised freedoms when the then British colony returned to Chinese rule in 1997. They say they are responding to excessive use of force by police.

China says it is committed to the “one country, two systems” formula granting Hong Kong autonomy. The city’s police deny accusations of brutality and say they show restraint.

China’s ambassador to London on Monday accused foreign countries including the United States and Britain of interfering in Chinese internal affairs through their reactions to the violent clashes taking place in Hong Kong.

“Some Western countries have publicly supported extreme violent offenders,” Ambassador Liu Xiaoming told a London news conference. He also said Western reporting on Hong Kong was misleading and did not give enough prominence to violence perpetrated by the protesters.

The unrest poses the gravest popular challenge to Chinese President Xi Jinping since he came to power in 2012. Beijing denies interfering in Hong Kong’s affairs and has blamed Western countries for stirring up unrest.

The Hong Kong government invoked a colonial-era emergency law in October banning faced masks commonly used by protesters. The High Court ruled on Monday the ban was unconstitutional and police said they would suspend all such prosecutions.