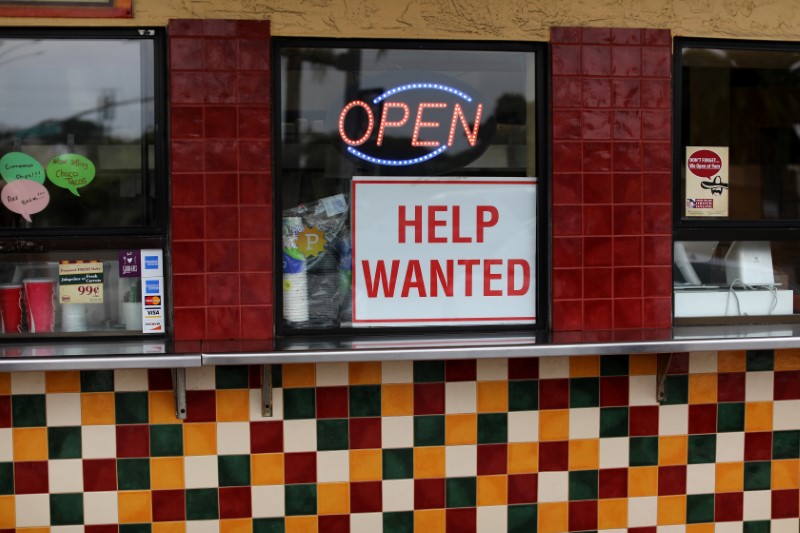 WASHINGTON (Reuters) – U.S. job growth increased less than expected in April and the unemployment rate dropped to near a 17-1/2-year low of 3.9 percent as some out-of-work Americans left the labor force.

“Fed officials can rest easy that there is not any wage-based inflation on the horizon,” said Chris Rupkey, chief economist at MUFG in New York. “There is no need to speed up the path of interest rates because inflation isn’t heating up in a worrisome manner.”

Nonfarm payrolls increased by 164,000 jobs last month, the Labor Department reported. Data for March was revised up to show the economy adding 135,000 jobs instead of the previously reported 103,000. That was the fewest amount of jobs created in six months and followed an outsized gain of 324,000 in February.

The drop of two-tenths of a percentage point in the unemployment rate from 4.1 percent in March pushed it to a level last seen in December 2000 and within striking distance of the Fed’s forecast of 3.8 percent by the end of this year. It was the first time in six months that the jobless rate dropped.

Economists polled by Reuters had forecast payrolls to rise by 192,000 jobs in April and the unemployment rate to fall to 4.0 percent. Average hourly earnings rose 0.1 percent last month after a 0.2 percent gain in March. That left the annual increase in average hourly earnings at 2.6 percent.

The dollar shrugged off the employment data, rising to its highest level this year against a basket of currencies. Prices of U.S. Treasuries fell and U.S. stocks rose.

Sluggish wage growth and a slowdown in hiring threaten to undercut the Trump administration’s argument that its $1.5 trillion income tax cut package, which came into effect in January and is highlighted by a sharp drop in the corporate income tax rate, would boost wages and hiring.

President Donald Trump cheered the drop in the unemployment rate on Friday.

“I thought the jobs report was very good. The big thing to me was cracking 4,” Trump told reporters. “That hasn’t been done in a long time … we’re at full employment. We’re doing great.”

Democrats, however, reiterated their criticism of the tax cuts, saying more than $390 billion in share buybacks had been announced since the passage of the tax bill.

But average hourly earnings could be understating wage inflation. The Employment Cost Index, widely viewed by policymakers and economists as one of the better measures of labor market slack, showed wages rising at their fastest pace in 11 years during the period.

Inflation is flirting with the Fed’s 2 percent target.

The Fed’s preferred inflation measure, the personal consumption expenditures price index excluding food and energy, was up 1.9 percent year-on-year in March after a 1.6 percent rise in February.

The U.S. central bank on Wednesday left interest rates unchanged and said it expected annual inflation to run close to its “symmetric” 2 percent target over the medium term.

Economists interpreted symmetric to mean policymakers would not be too concerned with inflation overshooting the target. The Fed hiked rates in March and has forecast at least two more increases for this year.

Economists expect the unemployment rate will drop to 3.5 percent by the end of the year. Monthly job gains have averaged about 200,000 this year, more than the roughly 120,000 needed to keep up with growth in the working-age population. Though the decline in the labor force accounted for the drop in the unemployment rate last month, labor market slack is diminishing.

A broader measure of unemployment, which includes people who want to work but have given up searching and those working part-time because they cannot find full-time employment, dropped to 7.8 percent last month, the lowest level since July 2001, from 8.0 percent in March.

Construction payrolls rebounded by 17,000 jobs last month after recording their first drop in eight months in March. Manufacturing employment increased by 24,000 jobs in April after a gain of 22,000 positions in March.

Payrolls for temporary help, seen as a harbinger of future permanent hiring, rose by 10,300 after falling by 2,100 in March. There was a modest gain in leisure and hospitality employment while wholesale traders laid off workers.

Government payrolls fell 4,000 in April amid a decline in education employment at state governments.

“The moderation in job gains over the past two months may mark the beginning of the slow deceleration to a sustainable pace of job gains, which we estimate to be around or a little below 100,000 per month,” said Michael Feroli, an economist at JPMorgan in New York.