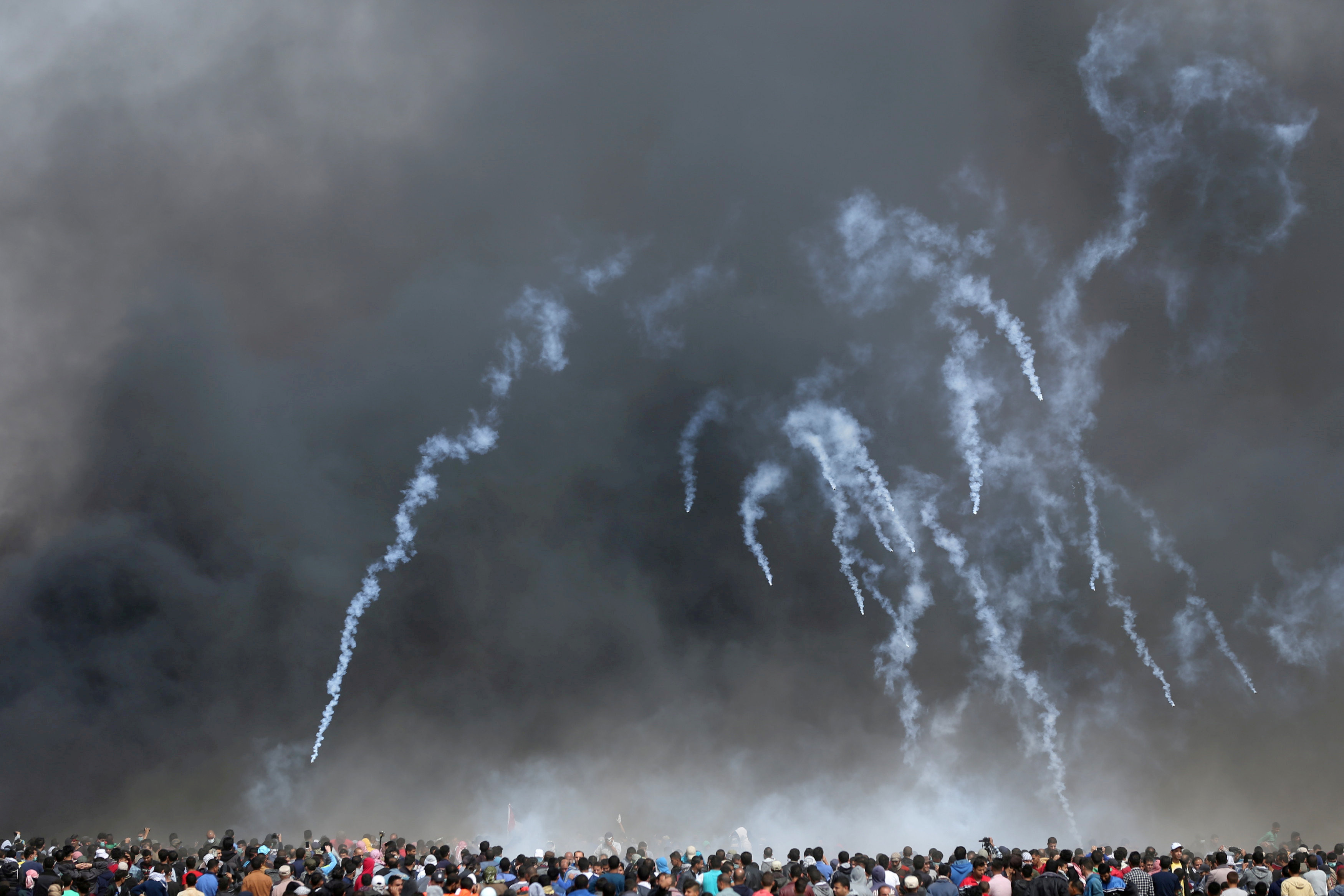 Medics said around 50 people were shot and wounded with live fire, three of them critically, and 300 more treated for gas inhalation and other injuries along the Gaza side of the 25-mile (40-km) border fence, where Palestinians set up tent encampments on March 30 for what they call “The Great March of Return”. 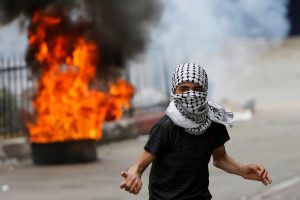 A Palestinian protester is seen in front of a burning tire during clashes with Israeli troops in Hebron, in the occupied West Bank May 4, 2018. REUTERS/Mussa Qawasma

Youths rolled burning tires to within 300 meters (yards) of the fence, trying to use the smoke as cover for throwing stones across it while eluding Israeli snipers. Army gunfire has killed at least 43 Palestinians on the frontier over the last month.

Facing international censure over its use of live fire in the protests, Israel says it is protecting its border and takes such action only when protesters, some hurling firebombs and trying to plant explosives, approach too closely.

On Friday, troops faced “approximately 7,000 Palestinians participating in riots in five locations along the Gaza Strip border,” a military spokesman said, adding that one group had tried to breach the fence and enter Israeli territory.

As Israel celebrates its 70th birthday, Palestinians mourn what they call the “Nakba” (Catastrophe) of their people’s mass dispossession during the conflict that broke out in 1948.

Two-thirds of the 2 million Palestinians in Gaza are war refugees or their descendants. The protests have seen thousands gather – in greater numbers on Fridays – to demand access to their families’ lost homes or lands, now in Israel. 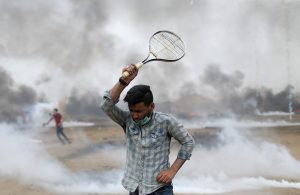 A demonstrator uses a racket to return tear gas canisters fired by Israeli troops during a protest where Palestinians demand the right to return to their homeland, at the Israel-Gaza border in the southern Gaza Strip, May 4, 2018. REUTERS/Ibraheem Abu Mustafa

“GIVE US A STATE”

Israel rules that out, concerned it would lose its Jewish majority. Alternatives, such as accommodating refugees and their descendants in a future Palestinian state, have been discussed in peace talks that date back to 1993 but which are now stalled.

“If it wasn’t for the occupation we would have lived as free as people like in other countries,” Ahmed, 24, said at a protest site east of Gaza City. “If they don’t allow us back, at least they should give us a state.”

Israel says the protests have been organized by Hamas – an Islamist group that controls Gaza and is sworn to Israel’s destruction – to provide cover for attacks, and that most of the dead were militants. Palestinians deny those allegations.

The protests take place at a time of growing frustration as prospects for an independent Palestinian state look poor. While the peace talks are stuck, Israel, which withdrew settlers and soldiers from Gaza in 2005 after a 38-year occupation, has expanded its settlements in the occupied West Bank.

An added focus this year is President Donald Trump’s decision to begin moving the U.S. Embassy to Jerusalem on May 14, the 70th anniversary of Israel’s founding.

Trump’s moves angered Palestinian leaders, who have refused to talk to his administration, accusing it of pro-Israel bias. Israel’s government celebrated the U.S. decision, saying it recognized the “reality” that Jerusalem was the historic capital of the Jewish people.

Visiting the Middle East earlier this week, U.S. Secretary of State Mike Pompeo lent his support to Israel’s handling of the border protests. “We do believe the Israelis have a right to defend themselves,” he said.