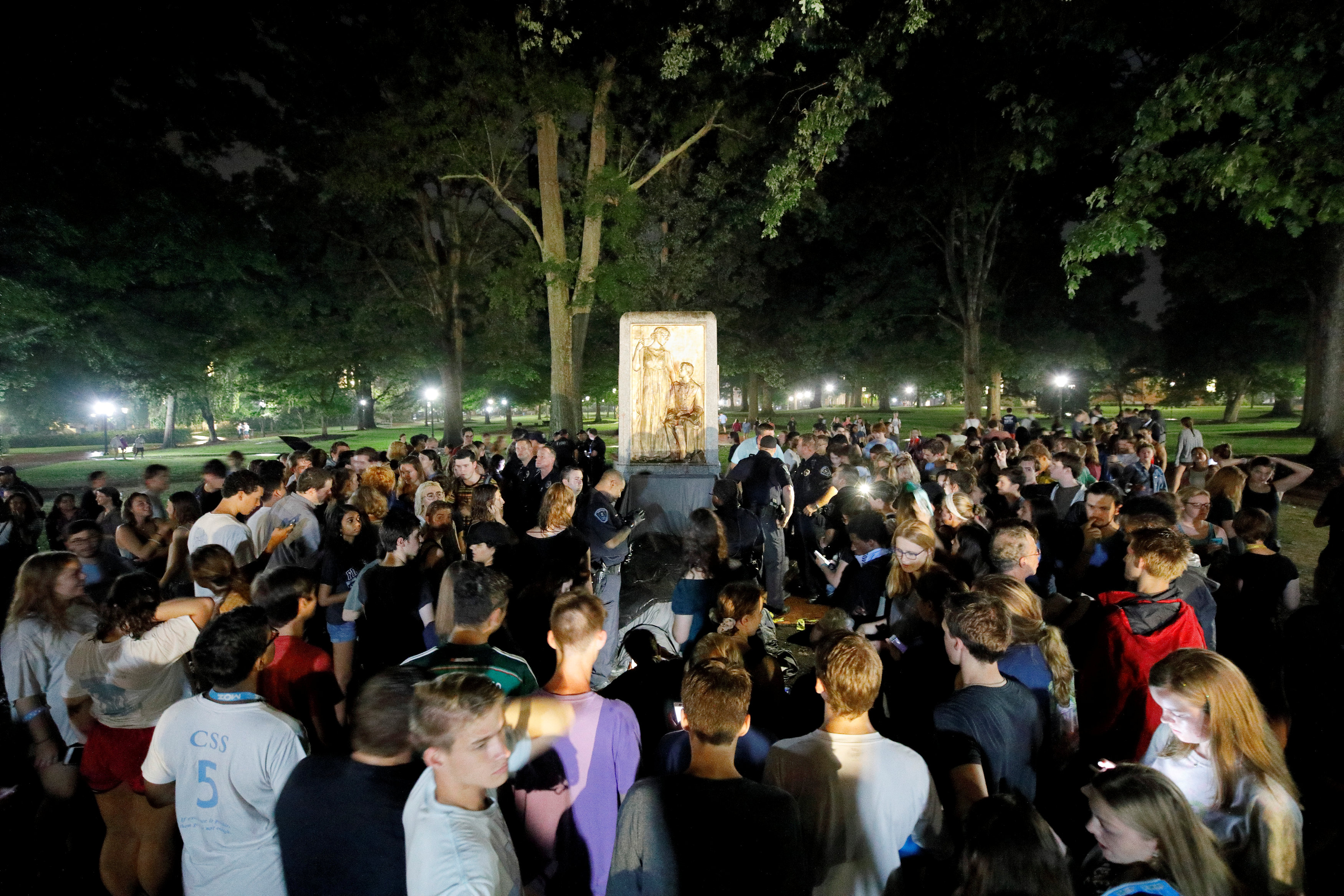 CHAPEL HILL, N.C. (Reuters) – Protesters toppled a statue of a Confederate soldier on the campus of University of North Carolina, the latest move to dismantle Civil War symbols amid debate about race and the legacy of slavery in the United States.

About 300 demonstrators gathered on Monday evening ahead of Tuesday’s first day of fall classes for a protest and march at the base of Silent Sam, a memorial erected in 1913 to the soldiers of the pro-slavery Confederacy killed during the Civil War. Protesters pulled the statue down with rope, cheering as it lay face down in the mud, its head and back covered in dirt. 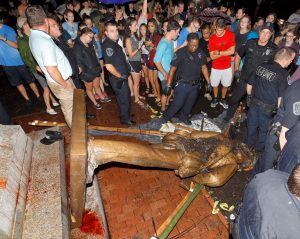 Police and protesters surround the toppled statue of a Confederate soldier nicknamed Silent Sam on the University of North Carolina campus after a demonstration for its removal in Chapel Hill, North Carolina, U.S. August 20, 2018. REUTERS/Jonathan Drake

“The monument has been divisive for years,” she said in a statement. “However, last night’s actions were unlawful and dangerous and we are very fortunate that no one was injured.”

North Carolina Governor Roy Cooper, a Democrat, echoed the sentiment, saying in a statement he shared protesters “frustration” over statues but condemning the violent destruction of public property.

Campus police arrested at least one person at the protest for masking their face and resisting arrest, according to Audrey Smith, a university spokeswoman.

The efforts by civil rights groups and others to do away with Confederate monuments such as Silent Sam gained momentum three years ago after avowed white supremacist Dylann Roof murdered nine black people at a church in Charleston, South Carolina. The shooting rampage ultimately led to the removal of a Confederate flag from the statehouse in Columbia.

Since then, more than 110 symbols of the Confederacy have been removed across the nation with more than 1,700 still standing, according to the Southern Poverty Law Center, a civil rights group. Many of the monuments were erected in the early 20th century, decades after the Civil War’s end.

Many Americans see such statues as symbols of racism and glorification of the southern states’ defense of slavery in the Civil War. Others view them as important symbols of American history.

(Additional reporting by Brendan O’Brien in Milwaukee and Jonathan Allen in New York; Editing by Christian Schmollinger and Bill Trott)