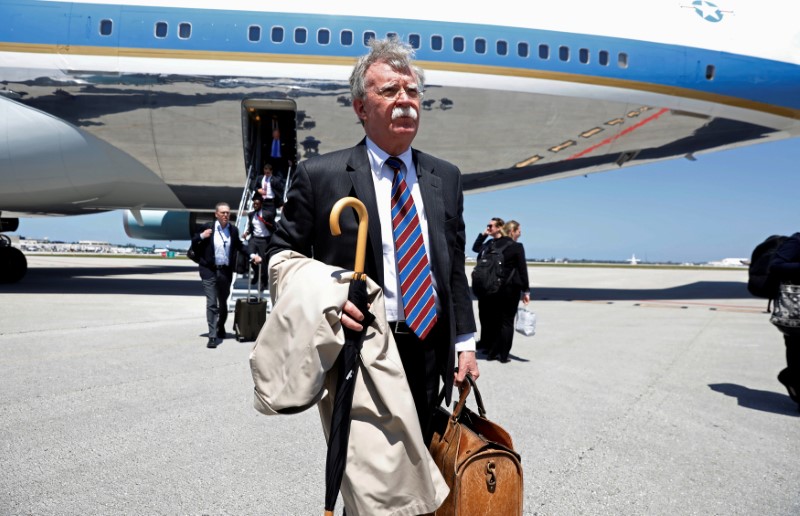 By Hyonhee Shin and Doina Chiacu

Bolton told CBS’s “Face the Nation” that Washington has devised a program to dismantle North Korea’s weapons of mass destruction – chemical, biological and nuclear – and ballistic missile programs in a year, if there is full cooperation and disclosure from Pyongyang.

“If they have the strategic decision already made to do that and they’re cooperative, we can move very quickly,” he said. “Physically we would be able to dismantle the overwhelming bulk of their programs within a year.”

He said Secretary of State Mike Pompeo will likely discuss that proposal with the North Koreans soon. The Financial Times reported that Pompeo was due to visit North Korea this week but the State Department has not confirmed any travel plans.

South Korea media reported on Sunday that Sung Kim, the U.S. ambassador to the Philippines, met with North Korean officials on Sunday at the border village of Panmunjom within the demilitarized zone separating the two Koreas to coordinate an agenda for Pompeo’s next visit to North Korea.

“It would be physically possible to dismantle the bulk of North Korea’s programs within a year,” said Thomas Countryman, the State Department’s top arms control officer under President Barack Obama.

Images analyzed by the Middlebury Institute of International Studies at Monterey, California show North Korea was finishing construction on the exterior of the plant around the time Kim Jong Un held a summit with Trump last month, the report said.

The Chemical Material Institute in Hamhung makes solid-fuel ballistic missiles, which could allow North Korean to transport and launch a missile more quickly, compared to a liquid-fuel system that requires lengthy preparation.

“None of this activity technically violates any agreement Kim may have made,” said Vipin Narang, an associate professor at MIT’s security studies Programme.

“What it suggests is that Kim has no intention of surrendering his nuclear weapons.”

Kim agreed at the June 12 summit to “work toward denuclearisation of the Korean Peninsula,” but the joint statement released after the meeting gave no details on how or when Pyongyang might forsake its nuclear and missile programs.

As negotiations progress, the North could try to trade sites and technology that have relatively low values in exchange for sanctions relief, while covertly operating facilities required to advance key capabilities, Narang said.

“It is perfectly rational for North Korea to shift the emphasis to developing solid fuel missiles now that it already has a suite of liquid fuel missiles to deter an attack,” he said.

FILE PHOTO: U.S. President Donald Trump and North Korea’s leader Kim Jong Un (L) arrive to sign a document to acknowledge the progress of the talks and pledge to keep momentum going, after their summit at the Capella Hotel on Sentosa island in Singapore, June 12, 2018. REUTERS/Jonathan Ernst/File Photo

Siegfried Hecker, a nuclear scientist and Stanford University professor, has predicted it would take around 10 years to dismantle and clean up a substantial part of North Korea’s Yongbyon nuclear site.

U.S. intelligence is not certain how many nuclear warheads North Korea has. The Defense Intelligence Agency is at the high end with an estimate of about 50, but all the agencies believe Pyongyang is concealing an unknown number, especially smaller tactical ones, in caves and other underground facilities around the country.

The U.S. intelligence agencies believe North Korea has increased production of fuel for nuclear weapons at multiple secret sites in recent months and may try to hide these while seeking concessions in nuclear talks with the United States, NBC News quoted U.S. officials as saying on Friday.

The Washington Post reported on Saturday that U.S. intelligence officials have concluded that North Korea does not intend to fully give up its nuclear arsenal and is considering ways to hide the number of weapons it has. It also reported Pyongyang has secret production facilities, according to the latest evidence they have.

Bolton refused to comment on intelligence matters but the United States was going into nuclear negotiations aware of Pyongyang’s failure to live up to its promises in the past.

“There’s not any starry-eyed feeling among the group doing this,” he said. “We’re well aware of what the North Koreans have done in the past.”