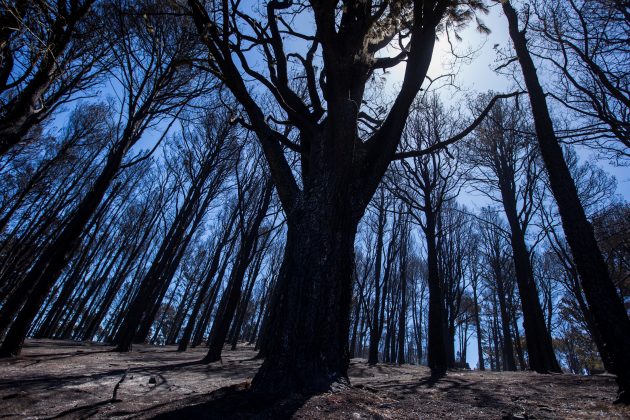 Trees burnt in a forest fire are seen in the village of Guia, in the Canary Island of Gran Canaria, Spain, August 20, 2019. REUTERS/Borja Suarez

TEJEDA, Spain (Reuters) – An out-of-control wildfire on Gran Canaria in Spain’s Canary Islands kept spreading on Monday, increasing to 9,000 the number of people evacuated from eight municipalities and reaching a natural park, authorities said on Monday.

The blaze, which began on Saturday near the town of Tejeda, is advancing on several fronts, propelled by a combination of high temperatures, strong winds and low humidity. So far, the fire is affecting the mountainous central part of the island rather than coastal areas busy with tourists in the summer months.

Around 6,000 hectares (23.17 square miles) have burned so far and the fire has entered the northwestern Tamadaba natural park, home to some of the island’s oldest pine forests and considered a complicated area for firefighters to intervene.

“We will defeat this serious and damaging fire,” Canary Islands’ regional president Angel Victor Torres said in a statement released by his office.

Gran Canaria’s airport is not being affected by the blaze, it added.

Sixteen planes and helicopters, as well as more than 1,000 firefighters, are working to contain flames as high as 50 metres (164 feet), authorities said.

The blaze marks the second time that Tejeda has been evacuated this month due to wildfire.