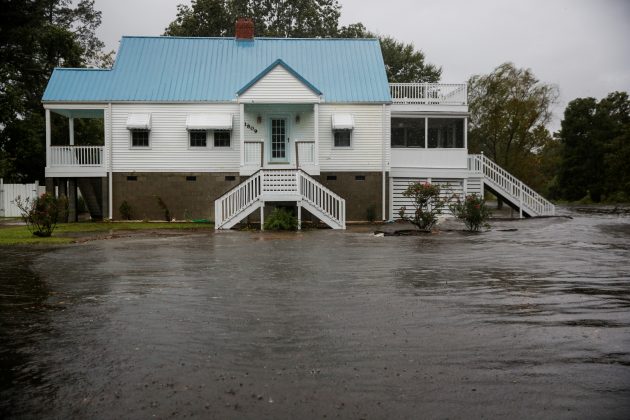 WILMINGTON, N.C. (Reuters) – Hurricane Florence, weakened but still dangerous, crashed into the Carolinas on Friday as a giant, slow-moving storm that stranded residents with floodwaters and swamped part of the town of New Bern at the beginning of what could be a days-long deluge.

The center of the hurricane’s eye came ashore at about 7:15 a.m. EDT (1115 GMT) near Wrightsville Beach close to Wilmington, North Carolina, with sustained winds of 90 miles per hour (150 kph), the National Hurricane Center (NHC) said. 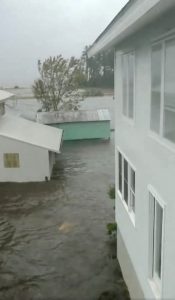 North Carolina Governor Roy Cooper said Florence was set to cover almost all of the state in several feet of water.

On the mainland in New Bern, authorities said more than 100 people had to be saved from floods and that the downtown area was underwater. The town’s public information officer, Colleen Roberts, told CNN 150 more people were awaiting rescue and that citizens were going out in their

boats to help, despite blowing waters and swift currents.

There were no immediate reports of storm-related deaths or serious injuries but more than 60 people, including many children and pets, had to be evacuated from a hotel in Jacksonville, North Carolina, after strong winds caused parts of the roof to collapse, local officials said.

National Weather Service forecaster Brandon Locklear predicted Florence would drop up to eight months’ worth of rain in two or three days.

More than 440,000 homes and businesses were without power in North and South Carolina early on Friday, utility officials said. Utility companies said millions were expected to lose power and that restoring it could take weeks. 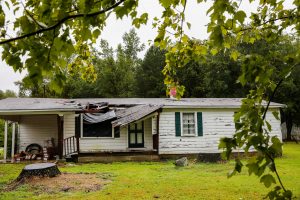 The roof of a house is seen affected by winds from Hurricane Florence as it hits the town of Wilson, North Carolina, U.S., September 14, 2018. REUTERS/Eduardo Munoz

Florence had been a Category 3 hurricane with 120 mph winds on Thursday but dropped to Category 1 before coming ashore. But forecasters said its extreme size meant it could batter the U.S. East Coast with hurricane-force winds for nearly a full day.

It is expected to move across parts of southeastern North Carolina and eastern South Carolina on Friday and Saturday, then head north over the western Carolinas and central Appalachian Mountains early next week, the NHC said. Significant weakening is expected over the weekend.

About 10 million people could be affected by the storm and more than 1 million were ordered to evacuate the coasts of the Carolinas and Virginia.

Emergency declarations were in force in Georgia, South and North Carolina, Virginia, Maryland and the District of Columbia.

“I had a lot of fear initially but I’m glad to be inside and safe,” said Zelda Allen, 74, a retired tax accountant from Hampstead, North Carolina, who was riding out the storm at Wilmington’s Hotel Ballast with her husband.

“I’m worried about what I might find when I go home, though,” she said.

(Reporting by Ernest Scheyder; Additional reporting by Gene Cherry in Raleigh and Brendan O’Brien in Milwaukee; Editing by Bernadette Baum and Nick Zieminski)