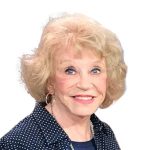 Maggie Peterson Mancuso is an American television actress best known for playing Charlene Darling on The Andy Griffith Show. She also played the character of Doris in the episode “A Girl for Goober”.

The youngest of four children, Peterson was born to Arthur and Tressa Hill Peterson. Her father was a doctor and her mother a homemaker. Aside from The Andy Griffith Show, Peterson also appeared on other TV shows such as Love American Style, Green Acres, Gomer Pyle USMC, and The Odd Couple. She appeared in an episode of Mayberry R.F.D. as Edna, a cafe waitress; in the 1986 movie Return to Mayberry; as the innocent Rose Ellen in the 1969 film The Love God?, starring next to Don Knotts; and in the 1968 film Angel in My Pocket.

Peterson grew up in a musical family. While growing up in Colorado, she has said her earliest memories were of music. Peterson, her brother Jim and two of Jim’s friends formed a small group called the Ja-Da Quartet. They would ride around in the back of a pickup truck singing to people.

In 1954 at a Capitol Records convention, Dick Linke (manager of Andy Griffith and Jim Nabors) heard Peterson singing and was so impressed with her, he encouraged her to come to New York. So in 1958 after graduating high school Maggie and the group did just that. They landed a number of stints on the Perry Como Show and the Pat Boone Show, and in 1959 they released their album “It’s the Most Happy Sound”. Soon after, the band broke up and went back home.

A short time later, Peterson joined another group, The Ernie Mariani Trio (later renamed Margaret Ann and the Ernie Mariani Trio). The group traveled for several years and had stints in resort areas such as Las Vegas, Lake Tahoe and Reno, where Frank Sinatra and the Rat Pack were often seen in the audience while Maggie performed. It was while she was on tour that Maggie was discovered by The Andy Griffith Show director Bob Sweeny and producer Aaron Ruben.