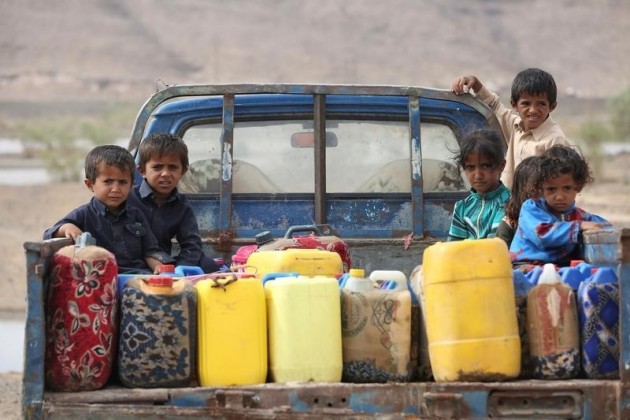 Children ride on the back of a truck loaded with water jerrycans at a camp for internally displaced people in the Dhanah area of the central province of Marib, Yemen, April 30, 2016. REUTERS/Ali Owidha

BARCELONA (Thomson Reuters Foundation) – The number of people uprooted inside their own countries by war and violence hit a record 40.8 million in 2015, with Yemen recording the most cases of newly displaced, an international aid group said on Wednesday.

Globally there were 8.6 million fresh cases of people fleeing conflict last year within borders, an average of 24,000 a day, the Internal Displacement Monitoring Centre (IDMC) said in a report. More than half of those were in the Middle East.

Some 2.2 million people in Yemen, or 8 percent of its population, were newly displaced in 2015, largely the result of Saudi-led air strikes and an economic blockade imposed on civilians, the report said.

IDMC said the number of people forced from their homes by conflict but staying in their own countries was twice those who have become refugees by crossing international borders.

“The world is in a tremendous displacement crisis that is relentlessly building year after year, and now too many places have the perfect storm of conflict and/or disasters,” said Jan Egeland, secretary general of the Norwegian Refugee Council, which runs IDMC.

“We have to find ways to protect people from these horrendous forces of both nature and the man-made ones.”

The U.N. refugee agency has said the number of people forcibly displaced worldwide was likely to have “far surpassed” a record 60 million in 2015, including 20 million refugees, driven by the Syrian war and other drawn-out conflicts.

The IDMC report said displacement in the Middle East and North Africa had “snowballed” since the Arab Spring uprisings that began in 2010 and the rise of the Islamic State militant group, which is waging war in Syria, Iraq and elsewhere.

“What has really led to the spike we have seen most recently has been the attack on civilians – indiscriminate bombing and air strikes, across Syria but also Yemen,” said Alexandra Bilak, IDMC’s interim director. “People have nowhere to go.”

Globally, there were 19.2 million new cases of people forced from their homes by natural disasters in 2015, the vast majority of them due to extreme weather such as storms and floods, IDMC said.

In Nepal alone, earthquakes in April and May uprooted 2.6 million people.

Egeland said many countries, such as Cuba, Vietnam and Bangladesh, had improved their record on preventing and preparing for natural disasters.

“But in Asia I would say, and to some extent Latin America, still too little is done to meet the growing strength of the forces of nature fueled by climate change,” he added.

The former U.N. aid chief urged this month’s World Humanitarian Summit in Istanbul to focus on building resilience to natural disasters, and finding ways to avert conflicts and protect civilians in war.

IDMC’s Bilak said political action was needed to stop more people being forced from their homes, and staying displaced for long periods.

“The numbers are increasing every year, which clearly shows that the solutions to displacement are not being found,” she told the Thomson Reuters Foundation.

Colombia, Democratic Republic of Congo, Iraq, Sudan and South Sudan have featured in the list of the 10 largest displaced populations every year since 2003, the report noted.

“People are not returning, they are not locally integrating where they have found refuge, and they are certainly not being resettled somewhere else,” Bilak said.