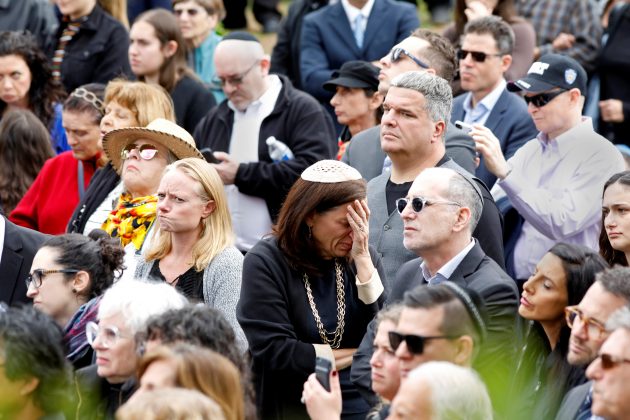 A crowd watches on screen the funeral for Lori Gilbert-Kaye, the sole fatality of the Saturday synagogue shooting at the Congregation Chabad synagogue in Poway, north of San Diego, California, U.S. April 29, 2019. REUTERS/John Gastaldo

SAN DIEGO (Reuters) – A 19-year-old man accused of killing one worshipper and wounding three others in a shooting spree in a California synagogue pleaded not guilty on Tuesday to murder and attempted-murder charges in an attack prosecutors are treating as a hate crime.

John Earnest, arrested shortly after Saturday’s bloodshed at the Chabad of Poway synagogue north of San Diego, also pleaded not guilty to a single count of arson on a house of worship stemming from a nearby mosque that was set on fire in March.

Appearing behind a glass partition for his arraignment in San Diego County Superior Court on Tuesday afternoon, Earnest stood expressionless and spoke faintly as he gave one-word answers to procedural questions put to him by the judge.

Ordering him to remain held without bail, Judge Joseph Brannigan said Earnest would pose “an obvious and extraordinary risk” to the public if he were to be released pending trial.

The proceeding was attended by six Hasidic Jewish men who sat in the front row of the courtroom, dressed in the traditional dark garb of the Jewish ultra-Orthodox faithful.

Authorities said Earnest stalked into the Poway synagogue during Sabbath prayers on the last day of the week-long Jewish Passover holiday and opened fire with an assault-style rifle, killing 60-year-old worshipper Lori Gilbert-Kaye

Three others were wounded in the attack, including the rabbi, who was shot in the hand and lost an index finger. 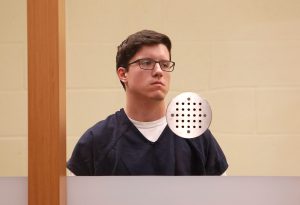 John Earnest, accused in the fatal shooting at the Chabad of Poway synagogue, stands in court during an arraignment hearing in San Diego, California, U.S., April 30, 2019. Nelvin C. Cepeda/Pool via REUTERS

The gunman, whose weapon apparently jammed, was chased out of the temple by a former Army sergeant in the congregation, then sped away in a car, escaping an off-duty U.S. Border Patrol agent who shot at the getaway vehicle but missed the suspect. Earnest pulled over and surrendered to police soon afterward.

Authorities said later they believed Earnest was the author of a rambling, violently anti-Semitic, anti-Muslim “manifesto” found posted on the internet under his name.

In it, the writer claimed responsibility for a pre-dawn arson fire on March 24 that damaged the Islamic Center of Escondido, a town about 15 miles (24 km) north of Poway, and professed to have drawn his inspiration from the gunman who killed 50 people at two mosques earlier that month in New Zealand.

Saturday’s bloodshed near San Diego came six months to the day after 11 worshippers were fatally shot at a Pittsburgh synagogue in a massacre that ranks as the deadliest ever on American Jewry. The accused gunman in that attack was arrested.

Authorities said Earnest had no prior criminal record.

Besides the charge of committing arson at a place of worship, he is charged with one count of murder and three counts of attempted murder. The criminal complaint, filed on Monday, also alleges the synagogue shooting was perpetrated as a hate crime. His public defender entered not guilty pleas to all charges on his behalf during Tuesday’s hearing.

If convicted, he would face life in prison without parole, or the death penalty, the district attorney’s office said.

District Attorney Summer Stephan told reporters afterward Earnest had legally purchased the murder weapon, although current California law generally prohibits rifles and shotguns from being sold to anyone under 21. The state’s legal age limit for such firearms was raised from 18 starting this year.

In addition to the murder weapon, Stephan said, police found five loaded ammunition magazines and another 50 rounds of bullets in Earnest’s vehicle when he was arrested.