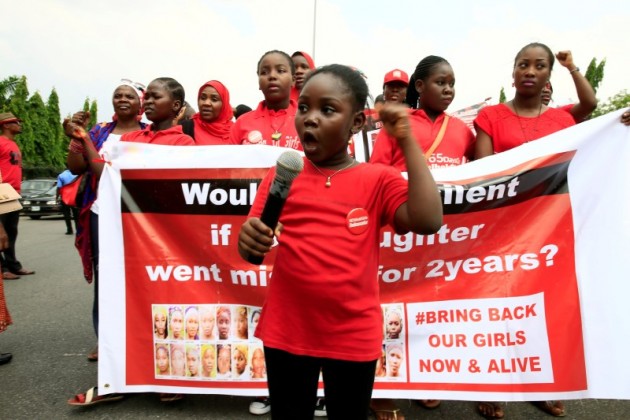 "Bring Back Our Girls" campaigner Christabell Ibrahim, 8, speaks during the media conference marking two years from the abduction of the Chibok girls, in Abuja Nigeria April 14, 2016. REUTERS/Afolabi Sotunde

LAGOS/ABUJA (Reuters) – A video showing 15 of the 219 schoolgirls held by the jihadist group Boko Haram has added pressure on the Nigerian government to secure their release, after activists accused authorities of mishandling the case in the two years since their mass kidnap.

Weeping parents identified the girls captured by Boko Haram fighters, who want to establish an Islamist state in northeast Nigeria and have waged a seven-year campaign of violence, killing thousands of people and displacing two million.

President Muhammadu Buhari, elected a year ago on a promise to end endemic graft and crush the group, said in December the government could talk to Boko Haram if credible representatives emerged.

In January he said the government was launching a new investigation into the kidnapping, vowing to return the girls captured at a school in the town of Chibok while taking exams. But little has emerged since then.

In the video, apparently taken in December and given to government officials by Boko Haram as proof of life for the negotiations, a person asks the 15 girls to say their names as they stand quietly in two rows, wearing headscarves.

“I saw all the girls and they are Chibok girls,” Esther Yakubu, a parent of one of the abducted girls who saw the video broadcast by CNN said. “I recognize some of them because we are in the same area with them.”

Yakubu was marching with some 30 other parents and activists to the presidential villa in the capital Abuja to demand the government do more to return the girls. Police stopped them at the road leading to the villa.

Witnesses to the kidnapping, Nigerian military and security officials, Western diplomats and counter-terrorism experts blame a series of failings by politicians and the military in dealing with the militants, including a lack of co-ordination.

Information Minister Lai Mohammed told CNN the government was still reviewing the video. When asked about efforts to get the girls released he only said: “There are ongoing talks.”

A top government official who declined to be named said an official reaction would only be made once the military had established the video’s authenticity.

Activists said Buhari’s government is not doing enough, urging the state to use the video for clues to find the girls and speak to girls who had managed to flee Boko Haram captivity.

“The incredible wealth of information that victims of terrorists can offer our security forces is being lost in the current undefined and ineffective approach,” Aisha Yesufu of the #BringBackOurGirls group said in a statement.

Buhari has blamed his predecessor Goodluck Jonathan who was slow to react to the abduction.

Under Buhari’s command, Nigerian troops backed up by Chad, Niger and Cameroon have recaptured most of territory held by Boko Haram, which pledged allegiance to Islamic State last year.

However, Boko Haram has no unified leadership which makes it difficult for the government to find someone to negotiate with, analysts say.

Boko Haram leader Abubakar Shekau appeared in a video circulated last month in which he seemed to suggest he was ailing and Boko Haram was losing its effectiveness. But another video emerged last week saying there would be no surrender.

Fulan Nasrullah, a security analyst, said there was little chance of a breakthrough in the talks between the government and the militants after the failure of previous efforts.