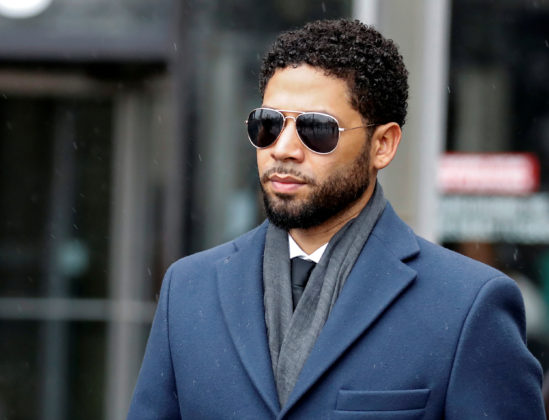 CHICAGO (Reuters) – Former “Empire” actor Jussie Smollett was due in court on Monday for arraignment on renewed felony charges that he made false reports to Chicago police about being attacked in a hate crime he is accused of staging in a bid to advance his career.

Smollett was indicted on Feb. 11 on six counts of disorderly conduct, capping a five-month investigation by a court-appointed special prosecutor who overruled a decision by the state’s attorney’s office last year to dismiss the original case. His arraignment is scheduled for 9 a.m. (1400 GMT) in Cook County Circuit Court in Chicago.

The 37-year-old actor, who is black and openly gay, has insisted he told the truth in his account of being accosted on a darkened street in January 2019 by two masked strangers.

According to Smollett, his two assailants threw a noose around his neck and poured chemicals on him while yelling racist and homophobic slurs and expressions of support for President Donald Trump.

Police arrested Smollett a month later, accusing the actor of paying two brothers $3,500 to stage the attack in a hoax aimed at gaining public sympathy and raising his show-business profile.

He was subsequently charged in a 16-count indictment, but the Cook County state’s attorney’s office dropped the charges three weeks later in exchange for Smollett forfeiting his bail without admitting wrongdoing.

The dismissal drew an outcry from then-Mayor Rahm Emanuel and the city’s police superintendent, who branded the reversal a miscarriage of justice, leading a Cook County judge to appoint former U.S. Attorney Dan Webb to review the case.

Webb said he determined that further prosecution of Smollett was warranted, calling into question prosecutors’ judgment in dropping the original case but finding no wrongdoing on their part. Webb said he was continuing his investigation, however, of whether authorities acted improperly in last year’s dismissal.

Smollett’s lawyer, Tina Glandian, has said authorities made the right decision in dropping the charges in the first place, and suggested the special prosecutor’s probe was biased in its use of the same police detectives involved in the original case.

Smollett, who has lost his role as a singer-songwriter in “Empire,” a Fox television hip-hop drama, sued the city of Chicago in November, accusing municipal officials of maliciously prosecuting him.