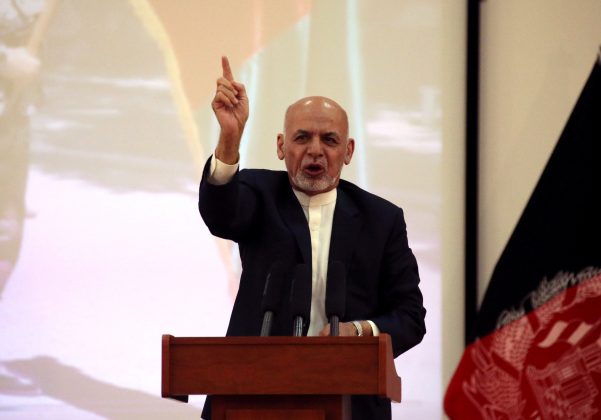 By Hamid Shalizi and Hameed Farzad

KABUL (Reuters) – Afghan President Ashraf Ghani made a renewed call for peace on Monday but insisted the Taliban must observe a ceasefire, as he sought to regain a hold on the peace process following the surprise collapse of talks between the United States and the militants.

Ghani’s comments, to a meeting of military leaders in Kabul, came amid uncertainty over the future of efforts to end 18 years of war in Afghanistan after U.S. President Donald Trump’s abrupt cancellation of talks with the Taliban at the weekend.

“We are ready for peace talks but if the Taliban think they can scare us, look at these warriors,” Ghani said, declaring that peace could not be unconditional as he repeated demands for a ceasefire that the Taliban have so far refused.

“Peace without a ceasefire is impossible.”

Trump’s refusal to meet the Taliban has left it unclear whether talks can be revived or whether the two sides, locked in a broad stalemate, will continue fighting.

The insurgents’ determination to step up both attacks on provincial centers and suicide bombings even as peace talks were taking place was a key factor in pushing Trump to cancel talks days after a U.S. soldier was killed in the capital Kabul.

The end of the talks has fueled fears of a further increase in violence across Afghanistan, with heightened security warnings in the Kabul and other centers ahead of a presidential election scheduled for Sept. 28.

The talks, which had been secret until Trump unexpectedly announced their cancellation on Saturday, would have brought the U.S. president face-to-face with senior Taliban leaders at the presidential compound in Camp David, Maryland.

Ghani, who was sidelined from months of negotiations between U.S. officials and Taliban representatives, had been deeply suspicious of the talks, which sought to agree a timetable for a withdrawal of thousands of U.S. troops.

A draft accord agreed last week would have seen some 5,000 U.S. troops withdrawn over coming months in exchange for guarantees that Afghanistan would not be used as a base for militant attacks on the United States or its allies.

Afghan officials had argued for months that it was a mistake for the United States to agree a deal on troop withdrawals separately from a broader peace accord.

The collapse of the talks appears to have strengthened Ghani’s position, in part by removing lingering doubts over whether the twice-delayed election – in which he is favorite to win a second five-year term – would go ahead.

Until Saturday’s surprise announcement by Trump, many politicians and Western diplomats had argued that peace talks should take priority over an election seen as a potential obstacle to a deal with the Taliban.

Now officials say there is no excuse for the vote not to be held, with election authorities promising that the problems that dogged parliamentary elections last year will not be repeated.

Ghani, a former World Bank official who came to power after a bitterly disputed election in 2014, has kept up campaigning even as the talks went on, adapting to the worsening security situation by holding “virtual rallies” that address supporters in various provinces through a video link-up.

“Afghanistan is now at a critical juncture because of the election and the peace process,” he said.