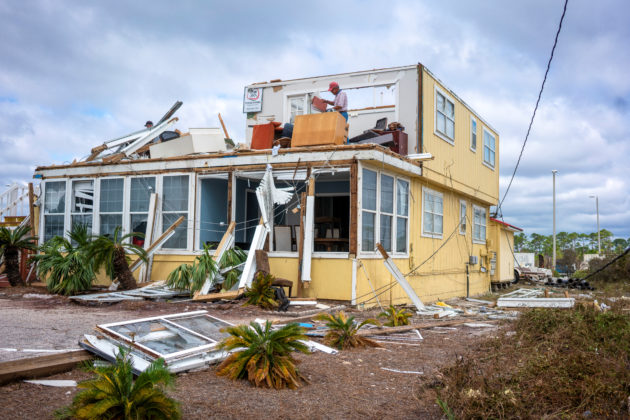 JJ McNelis tries to recover some items from his building after Hurricane Sally swept through, at Perdido Key, Florida, U.S., September 17, 2020. REUTERS/Kathleen Flynn

But that did not prepare him for Hurricane Sally, which flipped his camper and pushed it into his home, breaking off the front steps. High winds drove water through vents and roof, flooding a room.

Wallace and thousands of other residents along the U.S. Gulf Coast are just starting to tally the damage from Hurricane Sally, which could come in anywhere from $8 billion to $10 billion, well above earlier estimates of $2 billion to $3 billion, said Chuck Watson of Enki Research, which tracks tropical storms and models the cost of their damage.

Hurricanes are normally associated with massive wind gusts and rains on the coast, but inland rains causing floods over a vast region can make a storm even worse, as rivers and streams over spill, flooding communities along the way and causing the damage to as much as double.

The storm made landfall at Gulf Shores, Alabama on Wednesday morning as a Category 2 hurricane but continued carrying heavy rain inland as far north as Virginia on Thursday, according to the National Weather Service.

Sally’s immediate impact likely caused around $5 billion in damage and cleanup costs, Watson said. The storm has moved away from the coast but will bring several more inches of rain to the U.S. Southeast before dissipating.

“If you’re sitting on a river five miles inland, you’ve got the wind and two feet of rain dumped on you, then four to six days later a few feet of water comes down the river,” Watson said. Inland rains also could affect cotton and peanut harvesting, as five counties in central Georgia had radar totals over 10 inches in 12 hours, Watson said.

Several rivers in Alabama and Florida have not yet crested and are not expected to reach “major flood” stages until Saturday, according to the National Weather Service.

Evidence of water damage was rampant as the floods receded along the coast. The facade of an eight-floor apartment building in Gulf Shores was completely blown off, and damaged kitchens and bedrooms were visible, with furniture soaked from the torrential rains that pelted the area on Wednesday.

Wallace of FEMA said that more recently built homes were constructed with some elevation from the ground, so their damage is wind-related.

Numerous buildings had their roofs torn off, and rebuilding electrical, sewage and water systems will cost money.

In Gulf Shores, Paula Hendrickson, 70, evacuated her home near the water and came slightly more inland to her sister’s, thinking it would be safer.

But the wind ripped a fan off the front balcony of her sister’s home and damaged the roof, and Hendrickson’s car ended up flooded by saltwater and is likely a total loss.

“If you’ve been in an airplane that hits turbulence, that’s exactly how it felt. On and off, on and off. All night long,” Hendrickson said, adding, “I’ll never go through it again.”