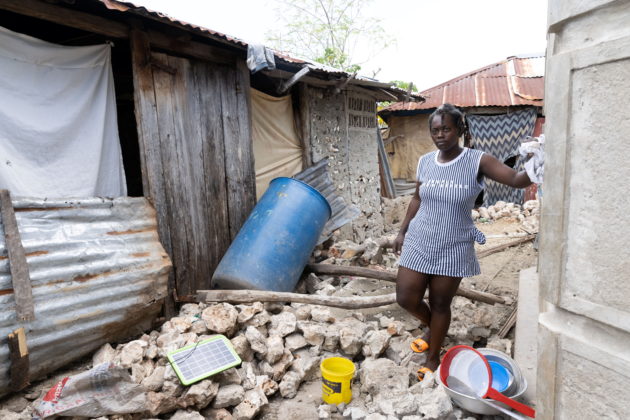 A resident stands amid the rubble as the International Search and Rescue (ISAR) Germany rescue team makes an assessment in the northern part of Haiti after a strong earthquake affected this area, August 19, 2021. Picture taken August 19, 2021. ISAR Germany/Paul-Philipp Braun/Handout via REUTERS

MARCELINE, Haiti (Reuters) – Damaged or impassable roads were complicating efforts on Friday to deliver aid to more remote parts of Haiti devastated by an earthquake last weekend that killed more than 2,000 people.

On the main inland mountain road between the southwestern city of Les Cayes and Jeremie to its northwest, two of the hardest hit urban areas, landslides and cracks in the tarmac made it harder to dispatch aid to farming communities now grappling with food insecurity and access to potable water.

The route was littered with boulders and the occasional stranded truck, according to a Reuters reporter.

The poorest country in the Americas, Haiti is still recovering from a 2010 quake that killed over 200,000 people.

The country was pitched into deeper instability last month by the assassination of President Jovenel Moise, by what authorities say was a group of largely Colombian mercenaries.

A powerful storm that hit Haiti earlier in the week, triggering landslides, has also made it harder to find victims of last Saturday’s quake, which destroyed tens of thousands of homes and claimed the lives of at least 2,189 people.

It also injured 12,200 people and the casualty toll is expected to rise as rescue efforts continue, authorities say.

In the village of Marceline, 25 km (16 miles) north of Les Cayes, a dozen residents were digging out a vast pile of rubble of what was once a handful of houses. The air smelled of decomposing bodies, and residents said that at least one woman who lived in one of the buildings was still missing.

Many of the hospitals remained saturated in the worst-hit areas of Haiti. In Les Cayes’ airport, helicopters ferried the injured to the capital, Port-au-Prince.

The recent kidnapping of two doctors in the capital, including one of the few trained orthopedic surgeons in the country, has further impeded recovery efforts. Some hospitals decided to shut down temporarily in protest, demanding that the gangs free the doctors, local media reported.

“(The kidnapping) paralyzes the care that the hospital was beginning to provide to earthquake victims,” Radio RFM said, citing the large Bernard Mevs hospital, where the orthopedic surgeon worked.