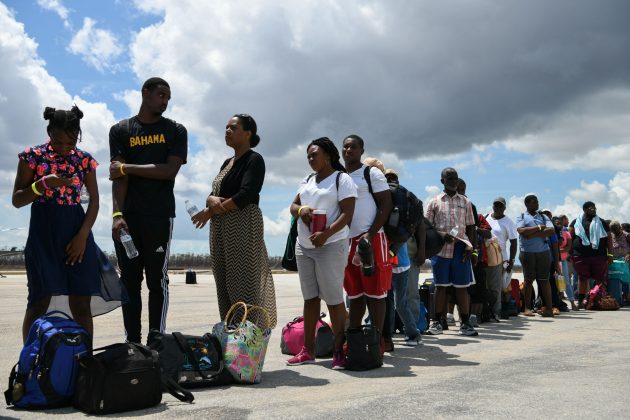 Abaco residents are evacuated from the island at the airport in the wake of Hurricane Dorian in Marsh Harbour, Great Abaco, Bahamas, September 8, 2019. REUTERS/Loren Elliott

MARSH HARBOUR/NASSAU, Bahamas (Reuters) – Days after fleeing their crumbling home and breaking into a vacant apartment to take shelter while Hurricane Dorian rampaged over the Bahamas’ Great Abaco Island, Samuel Cornish and his family caught a rescue flight to Nassau.

Asked what waited for him there, Cornish, a pastor’s son, was blunt: “Nothing,” he said. “Just a new life.” 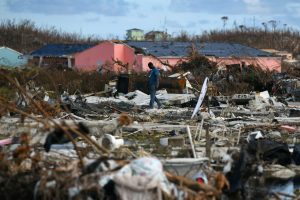 A man searches for belongings amongst debris in a destroyed neighborhood in the wake of Hurricane Dorian in Marsh Harbour, Great Abaco, Bahamas, September 8, 2019. REUTERS/Loren Elliott

By Sunday, a week after one of the strongest Caribbean hurricanes on record plowed into the archipelago nation of 400,000 people, the capital city faced a wave of thousands of evacuees fleeing hard-hit areas including Marsh Harbour in the Abacos, where some 90% of the infrastructure was damaged or destroyed.

Great Abaco was littered with mounds of unused construction materials, waterlogged notebooks and Bibles, stained piles of tattered clothes, single shoes, overturned bathtubs and rotting mattresses. Dead cats and dogs were strewn throughout the wreckage while some stray animals were digging through the garbage for food and had taken up residence on the porches of destroyed homes. At least one wild pig weathered the storm, celebrating its survival by charging at two Reuters journalists.

“What I was struck by was the focused nature of the devastation,” Mark Green, the administrator of the U.S. Agency for International Development, told reporters in Nassau on Sunday, adding that some areas in Abaco looked “almost as though a nuclear bomb was dropped.”

Bahamian officials were still pulling bodies from the wreckage across the island and acknowledged that the official death toll of 43 was likely to rise markedly. 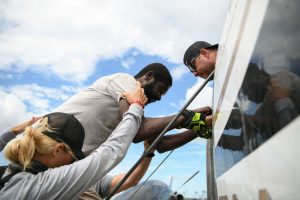 Abaco resident Bernard Forbes is evacuated from the island by Global Support and Development personnel at the airport in the wake of Hurricane Dorian in Marsh Harbour, Great Abaco, Bahamas, September 8, 2019. REUTERS/Loren Elliott

Some 70,000 people need food and shelter, according to the United Nations’ World Food Programme’s estimate. Interviews with evacuees this week shone light on the extent of Dorian’s destruction. Survivors avoided death, but lost homes, jobs and hospitals.

“Home is more than four walls and a roof — it’s the neighborhood where people live, their friends and neighbors, their livelihoods, comfort, and security for the future,” said Jenelle Eli, a spokeswoman for the Red Cross, which is helping with the relief. “People are concerned about their next step, but also how they’ll earn an income and what their lives will look like in the future.”

Bahamian officials acknowledged on Saturday that Nassau would strain to house all the people who needed shelter.

Some institutions that had opened their doors as a place for people to ride out the storm were trying to clear out people who had lost homes, Leonardo Cargill, of the island’s Department of Social Services, told a news conference.

“They now understand that the people coming in, it will be long-term sheltering, and many of them are church facilities and they cannot allow that to go on,” Cargill said.

That has Nassau officials considering other options.

“We can look at the tent city concept and the container city concept, these are all support mechanisms to help us,” Captain Stephen Russell, who heads the National Emergency Management Agency, told the news conference. “Jobs may be a challenge at this time but long term we can house them.”

International aid was also pouring into the island nation.

The U.S. Agency for International Development said it was allocating $2.8 million and had moved enough emergency supplies for 44,000 people to the islands.

The American Red Cross said it had committed an initial $2 million to help the Bahamas recover from the hurricane, with food, water and shelter and other necessities.

Norwegian energy company Equinor said on Sunday it will clean up an onshore oil spill discovered this week at its Bahamas storage terminal in the storm’s aftermath.

The storm had made its way to Canada by Sunday, where the U.S. National Hurricane Center said it was a still-powerful post-tropical cyclone with 75 mile-per-hour (120 km-per-hour) winds over the Gulf of St. Lawrence.

Many in hard-hit Marsh Harbour on Great Abaco complained that aid had been too slow in arriving.

“They haven’t done a thing to help us down here,” shouted Tepeto Davis, a 37-year-old tile contractor who slammed on the brakes of his pickup truck and backed up to talk to reporters. “We are suffering out here and no one cares about us. We’ve had to funnel gasoline out of destroyed cars to get injured people back and forth. There’s no gas, there’s no food, no medicine, and no water.”

Those receiving aid in Nassau worried that they were still a long way from being able to rebuild their lives.

“The government says everyone’s being fed, and that’s good,” said Anthony Morley, 61, who fled Marsh Harbour and was staying at Breezes, a Nassau resort where local volunteers have subsidized rooms for survivors. “But for food I can fish. What I need is a house. I don’t have a bed, a refrigerator. I don’t even have a Bible.”

(Reporting by Zachary Fagenson in Marsh Harbour and Nick Brown in Nassau; Additional reporting by Victoria Klesty is Oslo; Writing by Scott Malone; Editing by Lisa Shumaker and Howard Goller)