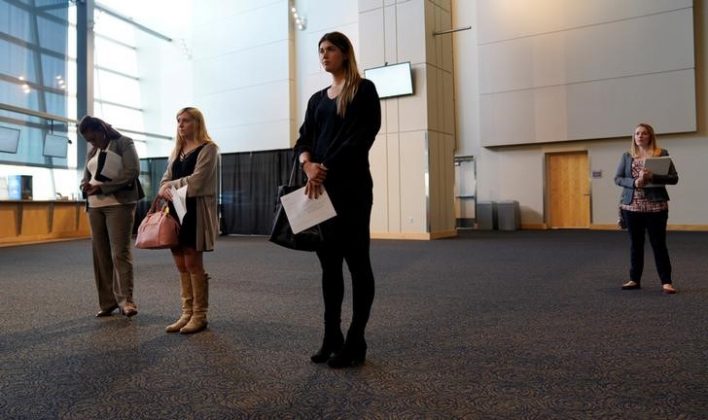 WASHINGTON (Reuters) – The number of Americans filing for unemployment benefits rebounded from a 45-year low last week, though by less than expected, pointing to tightening labor market conditions.

Initial claims for state unemployment benefits increased 17,000 to a seasonally adjusted 233,000 for the week ended Jan. 20, the Labor Department said on Thursday. Claims fell to 216,000 in the prior week, the lowest level since January 1973.

Economists polled by Reuters had forecast claims rising to 240,000 in the latest week. Claims have been volatile recently because of the difficulty adjusting the data for seasonal fluctuations at the end of 2017 and the start of the new year. Unseasonably cold temperatures also had an impact on the data.

The Labor Department said claims for Maine were estimated. It also said claims-taking procedures in Puerto Rico and the Virgin Islands had still not returned to normal months after the territories were pummeled by Hurricanes Irma and Maria.

Last week marked the 151st straight week that claims remained below the 300,000 threshold, which is associated with a strong labor market. That is the longest such stretch since 1970, when the labor market was much smaller.

“The song remains the same for tightness of the labor market – employers are extremely reluctant to fire current workers, which reflects not only the current positive business environment but also the difficulty in finding qualified replacements,” said John Ryding, chief economist at RDQ Economics in New York.

The U.S. dollar was largely unchanged against a basket of currencies after the data. Prices of U.S. Treasuries were trading mostly weaker, while U.S. stock index futures were higher.

The labor market is near full employment, with the jobless rate at a 17-year low of 4.1 percent. Last week, the four-week moving average of initial claims, considered a better measure of labor market trends as it irons out week-to-week volatility, fell 3,500 to 240,000.

The claims report also showed the number of people receiving benefits after an initial week of aid dropped 28,000 to 1.94 million in the week ended Jan. 13. The four-week moving average of the so-called continuing claims fell 3,500 to 1.92 million.

The continuing claims data covered the week of the household survey from which January’s unemployment rate will be calculated. The four-week average of continuing claims slipped 1,750 between the December and January survey periods.

That suggests little change in the unemployment rate this month. The jobless rate dropped seven-tenths of a percentage point in 2017, and economists expect it to hit 3.5 percent by the end of this year, which could spur faster wage growth as companies compete for workers.

“The Fed may have to pick up its game this year and raise rates four times, not just the three they have already forecast,” said Chris Rupkey, chief economist at MUFG in New York.