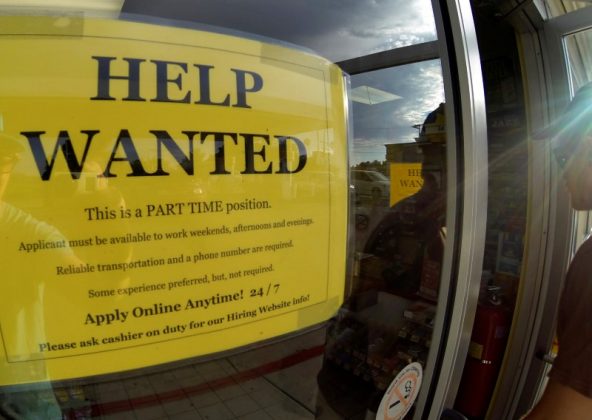 FILE PHOTO: A help wanted sign is posted on the door of a gas station in Encinitas, California, U.S., September 6, 2013. REUTERS/Mike Blake/File Photo

WASHINGTON (Reuters) – The number of American workers voluntarily quitting their jobs jumped in December to the highest level in nearly 17 years, in a strong show of confidence in the labor market which further bolsters expectations of faster wage growth this year.

The Labor Department’s monthly Job Openings and Labor Turnover Survey (JOLTS) report published on Tuesday came on the heels of news last week that annual wage growth in January was the strongest in more than 8-1/2 years. The labor market is almost at full employment.

The number of workers willingly leaving their jobs increased by 98,000 to 3.259 million, the highest level since January 2001. That lifted the quits rate to a 2.2 percent from 2.1 percent in November. This rate, which the Federal Reserve looks at as a measure of job market confidence, has rebounded from a low of 1.3 percent in late 2009.

“I had thought that by now, the fear of moving to another company would have faded,” said Joel Naroff, chief economist at Naroff Economic Advisors in Holland, Pennsylvania. “It really hadn’t very much, though maybe it is finally happening.”Rising job turnover boosts economists’ optimism that wage growth will accelerate this year and in turn help to push inflation toward the Fed’s 2 percent target. While economists remain confident that the U.S. central bank will increase interest rates at least three times this year, much would depend on the fortunes of the U.S. stock market.

“The data today are likely to keep the Fed on the path of gradual rate hikes this year as long as the stock market stabilizes from its death plunge the last two weeks,” said Chris Rupkey, chief economist at MUFG in New York.

“Labor market conditions are picture perfect today, but that can change in a hurry if worsening financial conditions and plunging markets take a toll on business confidence.”

The JOLTS report also showed that job openings, a measure of labor demand, decreased 167,000 to a seasonally adjusted 5.8 million. Still, job openings are not too far from a record high of 6.2 million touched in September.

The decline in job openings in December was led by the professional and business services sector, which saw a decrease of 119,000. Job openings in the retail trade sector fell 85,000 while vacancies in construction dropped 52,000.

But job openings in the information sector increased 33,000 and the federal government had an additional 13,000 vacancies in December. The jobs openings rate slipped one-tenth of a percentage point to 3.8 percent in December.

Hiring was little changed at 5.49 million.

“The recent moderation across much of the JOLTS data is not alarming to us given that levels still remain favorable across much of the data and that we have been expecting the pace of job growth to cool relative to the recent strong gains,” said Daniel Silver, an economist at JPMorgan in New York.