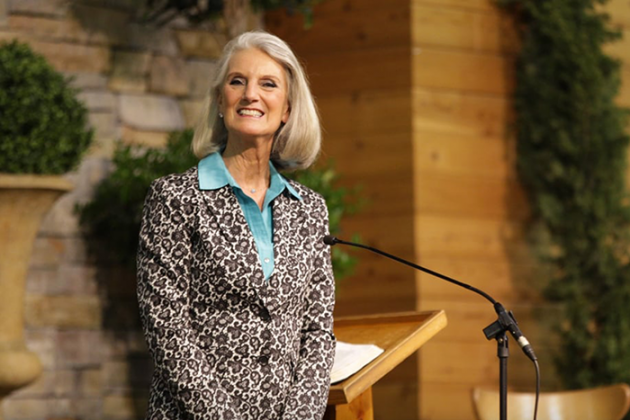 Morningside is thrilled and honored to announce that Anne Graham Lotz, author, evangelist and daughter of Billy Graham will be our special guest on The Jim Bakker show, Tuesday, June 14th.

The New York Times has named Anne as one of the five most influential evangelists of her generation. She speaks around the globe with the wisdom given from studying God’s Word and has been profiled on 60 Minutes. Anne has appeared on TV programs such as Larry King Live, The Today Show, and Hannity Live.

Called “the best preacher in the family” by her father, Anne’s message has remained steady, encouraging people into a personal relationship with a loving God through HIS Word.

Anne Graham Lotz, recently spoke at the Southeastern Baptist Theological Seminary and said that she believes God is keeping her father Billy Graham alive so that he will still be able to reach out to the lost and guide people through the end of times.

In a speech for Family Research Council’s 2016 Watchmen on the Wall conference in Washington, D.C the Christian Post reported Lotz spoke about faith and the reason why she thought her Dad was still alive on this earth.

“I thought it had to do with the Return of Jesus and I won’t go there right now, but I wonder also if [my father] is here … to be an encouragement to you — that there is a man that is still faithful, still has a heart for the Gospel, heart for God, heart for the lost and still prays,” she continued. “In fact, he prays in his preaching voice. He is still kicking. Maybe that will encourage you to be faithful through persevering in the ministry to which God has called you.”

Anne strongly believes that the second coming of Jesus Christ will happen during her lifetime. She has repeatedly said that the warning signs indicated in the Book of Revelations have started to unfold, what with major natural disasters and the Islamic State continuing to pose threats to the world.

Anne Graham Lotz is a best-selling and award-winning author. Her most recent release is called The Daniel Prayer: Prayer That Moves Heaven and Changes Nations. In her speech for the Southeastern Baptist Theological Seminary, Anne posed a question, “What can one person do when we’re faced with a mess or a disaster?”

Lotz outlines a pattern of prayer exemplified in the life of Daniel, specifically in chapter nine when Daniel pled to the Lord to deliver his people. She encouraged listeners to be like Daniel who was centered in prayer, clear in his asking and persistent in his petitions.

“My challenge to you is, what difference does the prayer of one person make?” she encourages readers.“You’re not going to know until you choose to be that one person. Would you pray until God delivers his people and takes them home?”

Anne is a natural, gifted teacher of truth. She also has a lifetime of experience from which she humbly yet boldly proclaims God’s Word and wisdom. Now she does it once again in The Daniel Prayer. And once again she encourages us that we can move mountains too! -Kathie Lee Gifford

Taping begins Tuesday, June 14th at 12pm CT on Grace Street at Morningside! Admission is free and we would love to see you there in our studio audience! This show will not be available on our live feed, however, you can view it before it airs on TV on Roku, Apple TV and the Video On Demand section of our website.

3 thoughts on “Anne Graham Lotz to be upcoming guest on The Jim Bakker Show!”