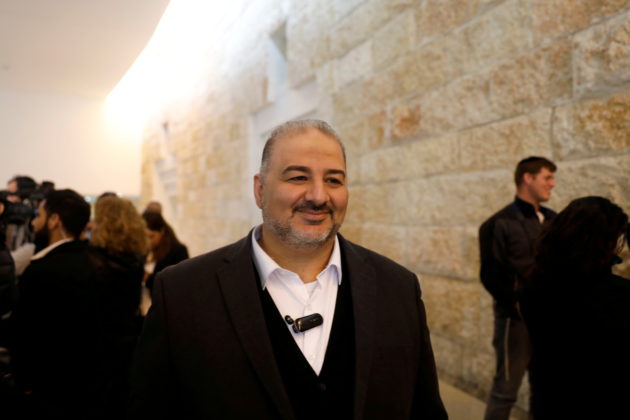 RAHAT, Israel (Reuters) – It was a photo opportunity for the history books: An Islamist politician from Israel’s Arab minority grinning alongside a far-right Jewish leader and his allies, moments after endorsing him as prime minister and handing him a governing majority.

The United Arab List would be the first party drawn from the country’s 21% Arab minority – Palestinian by heritage, Israeli by citizenship – to join an Israeli government, whose parliamentary approval is still pending.

Abbas, 47, has cast aside differences with prime minister-hopeful Naftali Bennett, a former leader of a major Jewish settlement organization and an advocate of annexing most of the the occupied West Bank – land Palestinians seek for a state.

A dentist by profession, Abbas says he hopes to improve conditions for Arab citizens, who complain of discrimination and government neglect.

“We decided to join the government in order to change the balance of political forces in the country,” he said in a message to supporters after signing a coalition agreement with Bennett and opposition leader Yair Lapid.

Abbas’s party said that the agreement includes the allocation of more than 53 billion shekels ($16 billion) to improve infrastructure and combat violent crime in Arab towns.

The agreement also includes provisions freezing demolition of homes built without permits in Arab villages and granting official status to Bedouin towns in the Negev desert, a stronghold for Islamist support, the party said.

“I say here clearly and frankly: when the very establishment of this government is based on our support…we will be able to influence it and accomplish great things for our Arab society,” Abbas said.

Abbas is from the mixed Druze, Muslim and Christian village of Maghar, near the Sea of Galilee. His party is the political wing of the southern branch of Israel’s Islamic Movement, which was established in 1971 and traces its origins to the Muslim Brotherhood.

Before agreeing to a coalition deal, Abbas sought and received approval from the Islamic Movement’s advisory Shura Council, a religious body, which has guided the party’s past votes in parliament on LGBT rights and other issues.

Abbas’s party split from Israel’s main Arab coalition, the Joint List, before a March 23 election after advocating, unsuccessfully, that they work with Netanyahu and other right-wing factions to improve living conditions for Arabs.

Many Arabs criticize Abbas’s approach, asking how he could justify belonging to a government that imposes a military occupation over their Palestinian brethren in the West Bank and leads a blockade of Hamas-ruled Gaza.

“He should be commended for trying something new, but if there’s another war with Gaza, and he’s in government, there will be pressure on him to abandon ship,” said Moussa al-Zayadna in the Bedouin town of Rahat in southern Israel.

“Bennett was the head of the Yesha Council (a settler umbrella group). We’re talking about dangerous people, and supporting them means that Mansour Abbas has chosen to stand with the extreme settler right against the interests of our people.”

But the decision to join a coalition was a strategic, long-term view, said Arik Rudnitzky of the Israel Democracy Institute.

“He would not withdraw such a strategic option just because of violent events,” Rudnitzky said.