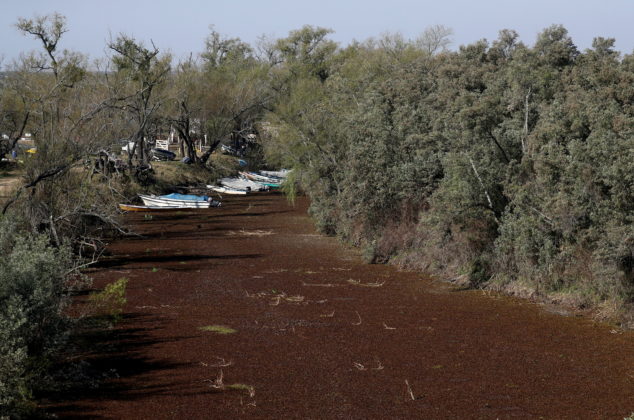 FILE PHOTO: Boats are seen stranded in a dried out wetland on the shore of the Parana River, in Rosario, Argentina July 8, 2021. The lack of rain in Brazil, where the river originates, has brought water levels down in Argentina, forcing cargo ships to reduce the amount of grains that are loaded for export. REUTERS/Agustin Marcarian

BUENOS AIRES (Reuters) – Argentina’s government has urged citizens to limit water use in a bid to alleviate pressure on the Parana River, a key grains thoroughfare that is at a 77-year low, a situation which is hampering shipments of cereals including soy and wheat.

A government advisory group called on people to “save water,” store rainwater for irrigation and avoid burning waste to prevent wildfires on the wetlands around the river delta.

“Water levels in the Parana are at the lowest level since 1944, which requires a commitment from everyone to attend and act preventively and responsibly against this situation,” the group said in a statement late on Monday.

The Parana, which has its source in southern Brazil, flows through Argentina to the coast near Buenos Aires. It is the transportation route for 80% of country’s farm exports and a source of drinking water, irrigation and energy.

However, due to a prolonged shortage of rainfall in Brazil, the Parana’s water levels have dropped dramatically, hitting the amount of cargo that can be carried by ships at the peak of the Argentine corn and soy export season.

On Saturday, the government announced a $10.4 million relief fund to mitigate the impact of low water levels.

On the banks of the Parana are important cities such as Rosario, Parana and Santa Fe. Rosario is the main agro-industrial hub and river port of Argentina, a leading global supplier of soy, corn and wheat to global markets.