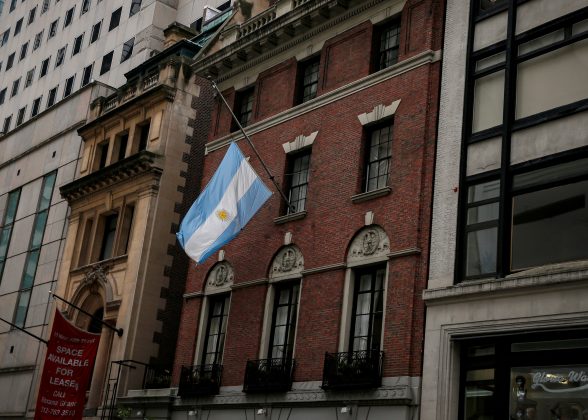 The flag hangs at half mast at the Argentine Consulate, in honour of the five Argentine citizens who were killed in the truck attack in New York on October 31, in New York City, U.S., November 2, 2017. REUTERS/Brendan McDermid

(Reuters) – “What has the world turned in to?” a friend of the five Argentines killed in the New York attack this week asked at a news conference on Friday, alongside three other surviving members of a group of former classmates.

Guillermo Banchini, an architect, and friends were cycling in New York during a 30-year high school reunion trip on Tuesday when a driver of a pickup truck plowed down a bike path.

“How could someone think of, plan and do something like this? We cannot get our heads around it,” Banchini said at the Argentine consulate in New York.

“Let there be justice. Let this not be repeated, not here nor anywhere in the world.”

Eight people, including a Belgian woman, a New Yorker and a New Jersey man, were killed and 11 injured in lower Manhattan in the attack along the Hudson River.

The suspect, 29-year-old Uzbek immigrant Sayfullo Saipov, was charged with acting on behalf of Islamic State, whose followers have carried out vehicle attacks in several cities, mostly in Europe.

The five deceased Argentines, businessmen and architects aged 48 to 49, were all alums of a polytechnic high school in Rosario, Argentina’s third-largest city.

Another member of the group, Martin Ludovico Marro, was injured and hospitalized in Manhattan and did not attend the televised news conference.

Banchini, speaking on behalf of the other Argentine survivors, said the pain they were feeling would always endure, but they would move forward the way they had learned as close knit childhood friends.

“In the name of those values, and a way of life, we want to make a bet – love conquers hate,” he said.