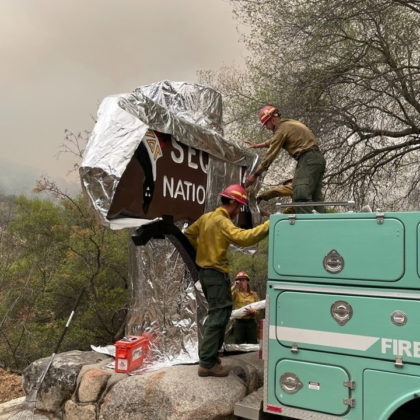 THREE RIVERS, Calif. (Reuters) – Fire crews have resorted to wrapping the bases of some giant sequoias in fire-resistant coverings in a desperate effort to save the towering specimens, including the General Sherman, the world’s largest tree, the National Park Service said on Friday.

The blaze, one of dozens to erupt across several western states in a fire season that got off to an early start, forced the closing earlier this week of Sequoia National Park and left a dense layer of smoke in the area early on Friday.

Air quality was poor in the small town of Three Rivers, which is near a park entrance and about halfway between Los Angeles and San Francisco, according to the town’s website.

The so-called KNP Complex fire, formed by the merger of two other wildfires, had grown to more than 9,000 acres (3,640 hectares) by late on Thursday, according to the federal Inciweb fire information system.

It was burning about a mile (1.6 km) from the park’s Giant Forest, home to the largest tree on earth by volume, dubbed General Sherman, before 115 employees evacuated the park earlier this week, the park service said.

“Crews are preparing the Giant Forest before the fire reaches that area, by removing fuel and applying structure wrap on some of the iconic monarch sequoias that characterize the most famous area of Sequoia National Park,” the park service said in a statement early on Friday.

Crews of 482 firefighters, aided by aircraft, are battling the week-old blaze, which was started by lightning and is burning in difficult-to-reach steep canyons, fueled by dry timber and chaparral, the Inciweb system said.

Maximum wind gusts of about 40 miles per hour (65 kph) have been hampering firefighters, but a predicted cooling trend is expected to aid their battle, it said.

The KNP Complex is one of at least 28 fires in California and 129 across several western states that have erupted since June in a fire season that traditionally begins in late summer, according to Inciweb data.

Other steps the park service said it has taken to protect the sequoias are prescribed burns, which would reduce the amount of available fuel in case KNP complex reaches them.