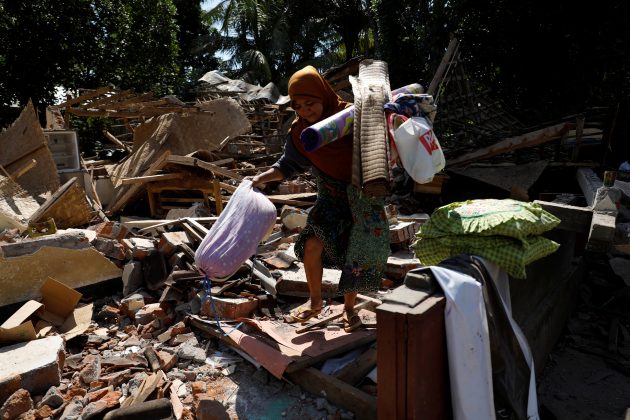 A woman carries valuable goods from the ruins of her house at Kayangan district after earthquake hit on Sunday in North Lombok, Indonesia, August 7, 2018. REUTERS/Beawiharta

KAYANGAN, Indonesia (Reuters) – The death toll from a powerful earthquake that hit Indonesia’s tourist island of Lombok topped 100 on Tuesday as rescuers found victims under wrecked buildings, while thousands left homeless in the worst-affected areas waited for aid to arrive. 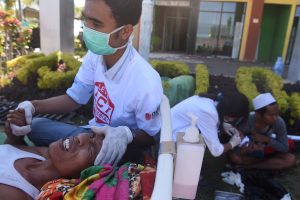 A woman was pulled alive from the rubble of a collapsed grocery store in the north, near the epicenter of Sunday’s 6.9 magnitude quake, the second tremor to rock the tropical island in a week.

That was a rare piece of good news as hopes of finding more survivors faded and a humanitarian crisis loomed for thousands left homeless by the disaster in the rural area and in desperate need of clean water, food, medicine, and shelter.

Sutopo Purwo Nugroho, the spokesman of Indonesia’s disaster mitigation agency (BNPB) put the toll at 105, including two on the neighboring island of Bali to the west, where the quake was also felt – and the figure was expected to rise.

Lombok had already been hit by a 6.4 magnitude earthquake on July 29 that killed 17 people and briefly stranded several hundred trekkers on the slopes of a volcano.

Indonesia sits on the Pacific Ring of Fire and is regularly hit by earthquakes. In 2004, the Indian Ocean tsunami killed 226,000 people in 13 countries, including more than 120,000 in Indonesia. 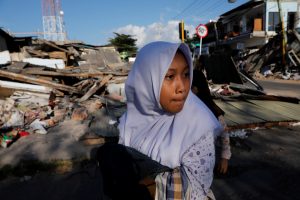 People walk near the ruins of a shop after an earthquake hit on Sunday in Pemenang, Lombok island, Indonesia, August 7, 2018. REUTERS/Beawiharta

Few buildings were left standing in Kayangan on the island’s northern end, where residents told Reuters that as many as 40 died.

Some villagers used sledgehammers and ropes to start clearing the rubble of broken homes, but others, traumatized by continued aftershocks, were too afraid to venture far from tents and tarpaulins set up in open spaces.

There has been little government relief for the area, where the greatest need is for water and food, as underground water sources have been blocked by the quake and shops destroyed or abandoned.

About 75 percent of the north has been without electricity since Sunday, officials said, and some communities were hard to reach because bridges were damaged and trees, rocks, and sand lay across roads cracked wide open in places by the tremor.

“People have moved to the hillsides where they feel safer. It’s difficult for help to reach them. We advise people to come down and move closer to the camps.” 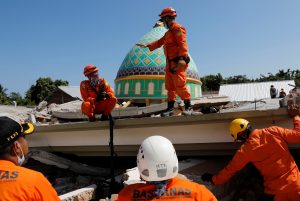 Rescuers and policemen talk on top of a collapsed mosque as they try to find survivors after an earthquake hit on Sunday in Pemenang, Lombok Island, Indonesia, August 7, 2018. REUTERS/Beawiharta

Aid agency Oxfam said it was providing clean drinking water and tarpaulin shelters to 5,000 survivors, but the need was much greater, with more than 20,000 estimated to have been displaced.

“Thousands … are under open skies in need of drinking water, food, medical supplies, and clothes,” it said in a statement. “Clean drinking water is scarce due to the extremely dry weather.”

Villagers in Pemenang on Lombok’s northwestern shoulder heard cries for help emerging from the mangled concrete of a collapsed minimart on Tuesday and alerted rescuers. Four hours later they pulled out alive Nadia Revanale, 23.

“First we used our hands to clear the debris, then hammers, chisels, and machines,” Marcos Eric, a volunteer, told Reuters. “It took many hours but we’re thankful it worked and this person was found alive.”

Rescuers heard a weak voice coming from under the wreckage of a nearby two-story mosque, where four people were believed to have been trapped when the building pancaked.

“We are looking for access. We have a machine that can drill or cut through concrete, so we may use that. We are waiting for heavier equipment,” Teddy Aditya, an official of the Indonesian Search and Rescue Agency (Basarnas), told Reuters. 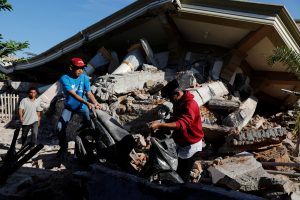 People push their motorcycle through the collapsed ruins of a mosque after an earthquake hit on Sunday in Pemenang, Lombok island, Indonesia, August 7, 2018. REUTERS/Beawiharta

Thousands of tourists have left Lombok since Sunday evening, fearing further earthquakes, some on extra flights added by airlines and some on ferries to Bali.

Officials said about 4,600 foreign and domestic tourists had been evacuated from the three Gili islands off the northwest coast of Lombok, where two people died and fears of a tsunami spread soon after the quake.

Saffron Amis, a British student on Gili Trawangan – the largest of the islands fringed by white beaches and surrounded by turquoise sea – said at least 200 people were stranded there with more flowing in from the other two, Gili Air and Gili Meno.

“We still have no wi-fi and very little power. Gili Air has run out of food and water so they have come to us,” she told Reuters in a text message, adding later that she had been taken by boat to the main island en route to Bali.