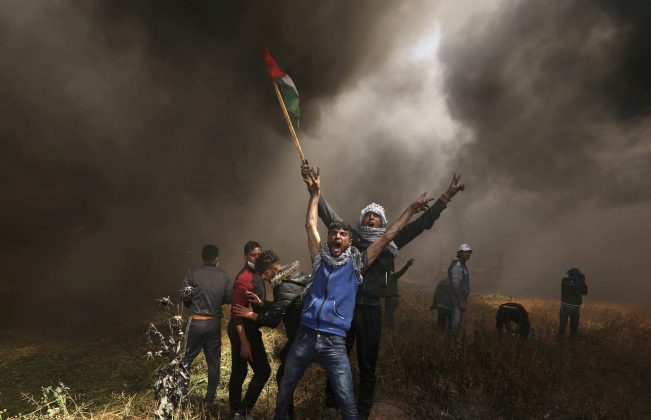 Palestinian demonstrators shout during clashes with Israeli troops at a protest demanding the right to return to their homeland, at the Israel-Gaza border east of Gaza City, April 6, 2018. REUTERS/Mohammed Salem.

GAZA (Reuters) – The Israeli-Palestinian conflict is often framed in black and white, an outlook captured by this image of Palestinian youths shrouded by clouds of smoke that block out everything except an isolated moment of protest and defiance.

Reuters photographer Mohammed Salem’s photograph of a handful of demonstrators in a field of dying flowers and charred grass recorded a new phenomenon in an old war the weekly Palestinian protests that began in the spring of 2018 along the Gaza-Israeli border.

The protests pitted thousands of Palestinian demonstrators against heavily armed Israeli soldiers on the other side of the fortified border fence intent on stopping the protesters from crossing or approaching the frontier.

What became known as the “Great March of Return” dominated the headlines for months, evolving into a compelling but deadly form of attritional public spectacle, all covered by photojournalists risking their lives to document it.

Taking place in a handful of accessible locations at prearranged times, the protests became battlegrounds of image and spin for both sides.

The Israeli military published video footage, pictures and social media posts in Hebrew, English and Arabic to support its message that its forces were engaged in “riot dispersal”.

Hamas, the militant Islamist group that controls Gaza, televised images of the Palestinian dead and wounded, and Palestinian protesters posted images from the front lines on social media.

The primary stated purpose of the protests was to revive a demand by refugees for the right to return to lands that Palestinians were driven from or fled when Israel was founded in 1948. Israel has ruled out any such right, concerned that the country would lose its Jewish majority.

But the immediate factor was Palestinian anger at U.S. President Donald Trump’s decisions on Dec. 6 last year to recognize Jerusalem as the capital of Israel and to begin preparations to move its embassy to the city that is sacred to three of the great monotheistic faiths: Judaism, Christianity and Islam. 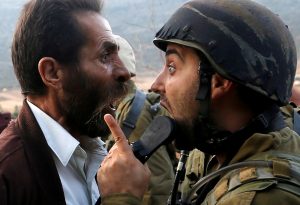 A Palestinian man argues with an Israeli soldier during clashes over an Israeli order to shut down a Palestinian school near Nablus in the occupied West Bank, October 15, 2018. REUTERS/Mohamad Torokman

The deadliest day of the protests was May 14, when the new embassy held its opening ceremony. It fell on a symbolic date for both sides – the 70th anniversary of the creation of Israel. That is a joyous day for Israelis, but an event regarded by Palestinians as their “Nakba” or Catastrophe when they lost their homeland.

The Jerusalem-Gaza juxtaposition made headlines at home and abroad, and produced a worldwide split-screen television moment as Trump’s daughter Ivanka attended the embassy ceremony, even as Israeli troops killed around 60 Palestinian protesters just over 70 km (43 miles) away.

The border protests continued and morphed into other forms.

Israelis were angered by another new phenomenon first seen in 2018 – the Palestinian ‘fire kites’ and balloons loaded with petrol bombs by Gaza militants and sent flying over the border.

Palestinians continued to call for an end to an Israeli-led blockade on Gaza. 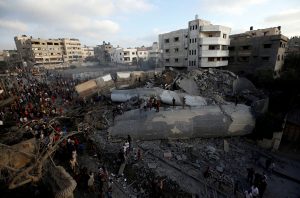 Palestinians gather around a building after it was bombed by an Israeli aircraft, in Gaza City August 9, 2018. REUTERS/Mohammed Salem

The conflict switched to the skies in November when a bungled Israeli commando mission inside Gaza erupted into a deadly gunfight and then the fiercest Palestinian rocket salvoes and Israeli air strikes since the 2014 war.

The skies fell quiet again as the year drew to a close, giving way to ceasefires and mediation efforts, as all sides waited for the Trump administration to unveil its long-expected Middle East peace plan.