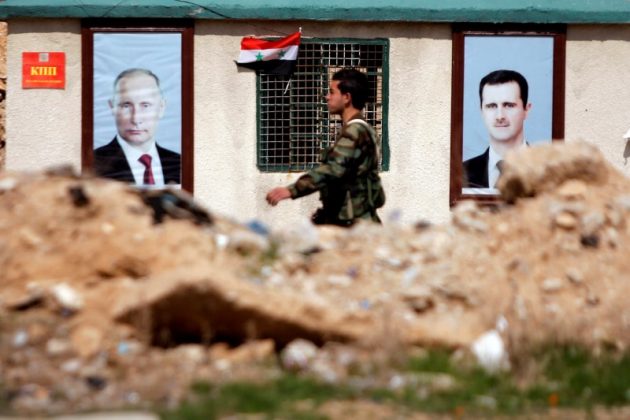 By Angus McDowall and Suleiman Al-Khalidi

BEIRUT/AMMAN (Reuters) – The Syrian government stepped up its efforts on Thursday to retake the opposition’s last besieged enclaves, as rebels prepared to withdraw from one and a newspaper reported an ultimatum against another.

President Bashar al-Assad scored a major victory this month by retaking eastern Ghouta, the biggest rebel stronghold near Damascus, putting his forces in by far their strongest position since the early months of the seven-year-old civil war.

The United States, Britain and France launched a volley of air strikes on Saturday against three Syrian targets in retaliation for a suspected chemical weapons strike during the Ghouta assault.

But the limited Western intervention, far from any contested battlefront, has shown no sign of having any impact on the ground, where Assad’s forces have pressed on with his offensive.

The last rebels withdrew from eastern Ghouta hours after the Western bombing. Since then, the government has focused on regaining four less populous encircled enclaves.

Their capture would leave the opposition holding only its two main strongholds, located in the northwest and southwest along Syria’s international borders.

Diplomacy this week has focussed on the accusations of poison gas use in Douma, the last town to hold out against the government advance in eastern Ghouta.

Western countries say scores of people were gassed to death in the April 7 chemical attack. Syria and its ally Russia deny it. Now that the rebels have surrendered, the area is under government control, and a team of international inspectors has so far been unable to reach it.

The inspectors have delayed their visit to Douma after their security team were shot at during a reconnaissance trip on Tuesday, the Organization for the Prohibition of Chemical Weapons said.

The Western countries say Moscow and Damascus are preventing the inspectors from reaching the site and may be destroying evidence. Russia and Assad’s government deny this.

Meanwhile, the Western intervention has had no measurable impact on the wider war, with rebels continuing to surrender under deals that allow them to withdraw to the opposition pocket in the northwest in return for abandoning territory.

State television showed live footage of buses entering the town of Dumayr, northeast of Damascus, to bring out fighters and their families, while soldiers stood by the roadside.

Twenty buses would be used to transfer about 5,000 people, including 1,500 rebels, to north Syria after they surrendered their heavy weapons, Syrian state TV said.

Dumayr has been covered by an informal ceasefire for years, but its recovery is important for the government because it makes it possible to guarantee the safety of vehicles travelling on the Damascus-Baghdad highway.

Said Saif, a senior official with one of the rebel groups in the area, said his group had no choice but to go along with a Russian-backed deal to leave the town, because there were no other outside forces that could guarantee their safety.

“We hope the Russians keep their promises, even though we have no trust in them,” he said.

In the nearby enclave of Eastern Qalamoun, which consists of several towns and an area of hills and has also been covered by an informal ceasefire, rebels said they were also negotiating a withdrawal deal with Russia.

The army has put military pressure on rebels in Eastern Qalamoun to start negotiations to withdraw, the Syrian Observatory for Human Rights war monitoring group said.

A military news service run by the government’s Lebanese ally Hezbollah reported on Thursday that the army had moved into positions inside the enclave to entirely encircle one of its towns, al-Ruhayba.

The Observatory said there were also talks under way between Russia and rebels over the fate of an enclave in central Syria around the town of Rastan.

Separately, the pro-government al-Watan newspaper reported on Thursday that Islamic State militants had been given 48 hours to agree to withdraw from an enclave centred around the Yarmouk camp for Palestinian refugee south of Damascus.

“If they refuse, the army and supporting forces are ready to launch a military operation to end the presence of the organisation in the area,” al-Watan said.

Most residents have fled the camp, once Syria’s largest for Palestinian refugees, but thousands of civilians are still inside. Christopher Gunness, a spokesman for the United Nations Relief and Works Agency (UNRWA) which looks after Palestinian refugees said it was deeply concerned for their safety.

A commander in the regional military alliance that backs the Syrian government said the Syrian army had begun shelling the jihadist enclave on Tuesday in preparation for an assault.

Islamic State lost most of its territory last year, but it still holds small areas of desert in eastern Syria on either side of the Euphrates river. On Thursday neighbouring Iraq carried out air strikes against the jihadist group in Syria in coordination with Damascus, the Iraqi military said.

(Reporting by Suleiman al-Khalidi in Amman, Tom Perry and Dahlia Nehme in Beirut, Ben Blanchard in Beijing and Raya Jalabi in Baghdad; Writing by Angus McDowall; Editing by Peter Graff)