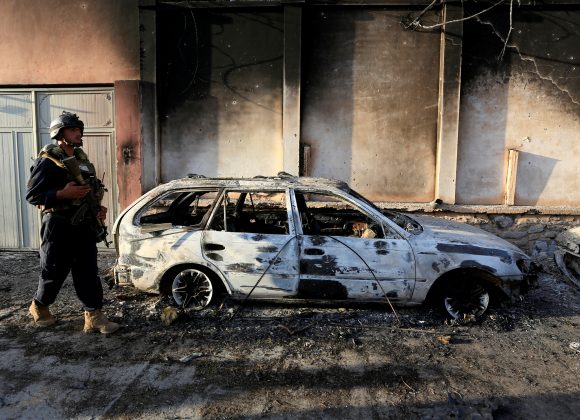 An Afghan policeman inspects the site of an attack in Jalalabad, Afghanistan July 31, 2018. REUTERS/Parwiz

JALALABAD, Afghanistan (Reuters) – At least 15 people were killed on Tuesday in Afghanistan’s eastern city of Jalalabad when gunmen stormed a government building, trapping dozens inside after a suicide bomber blew himself up at the entrance gate, officials and witnesses said.

The attack underlines the country’s dire security situation after 17 years of war, with Islamic State increasingly claiming attacks on civilian targets even as pressure builds for peace talks between the Western-backed government and the Taliban.

There was no immediate claim of responsibility, though the Taliban issued a statement denying involvement.

After several hours during which intermittent gunfire and explosions could be heard, provincial government spokesman Attaullah Khogyani said the incident appeared to be over with two gunmen killed and much of the building destroyed.

One witness, a passerby named Obaidullah, said the attack began when a black car with three occupants pulled up at the entrance to a building used by the department of refugee affairs and a gunman emerged, firing around him.

One attacker blew himself up at the gate and two gunmen entered the building, in an area close to shops and government offices, he added.

Minutes later, the car blew up, wounding people in the street, Obaidullah said.

“We saw several people wounded and helped to carry them away,” he added.

As security forces cordoned off the area, gunshots and what appeared to be hand grenade explosions could be heard as a cloud of black smoke drifted into the sky.

Sohrab Qaderi, a member of the local provincial council, said about 40 people appeared to have been caught inside the building, which caught fire early in the attack.

As the attack concluded, it was not immediately clear what had happened to them. Islamic State has claimed a number of recent attacks in the city. 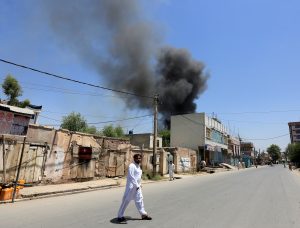 Smoke rises from an area where explosions and gunshots were heard, in Jalalabad city, Afghanistan July 31, 2018. REUTERS/Parwiz

Khogyani said the attack happened during a meeting with NGOs working on refugee-related issues. The head of the department and several other people were taken to safety, he said.

Although it is unclear whether there is any direct connection, Islamic State attacks have picked up as hopes for peace talks between the government and the Taliban have grown in the wake of last month’s three-day ceasefire.

The attacks have been concentrated in Jalalabad, the main city of Nangarhar province, on the border with Pakistan where Islamic State fighters first appeared toward the end of 2014.

The casualties add to a mounting toll in Afghanistan. In the western province of Farah, 11 people were killed when their bus was hit by a roadside bomb, officials said.

Also on Tuesday, unknown attackers seized 22 people from vehicles on a highway linking Kabul and Gardez, a key city in the eastern province of Paktia.