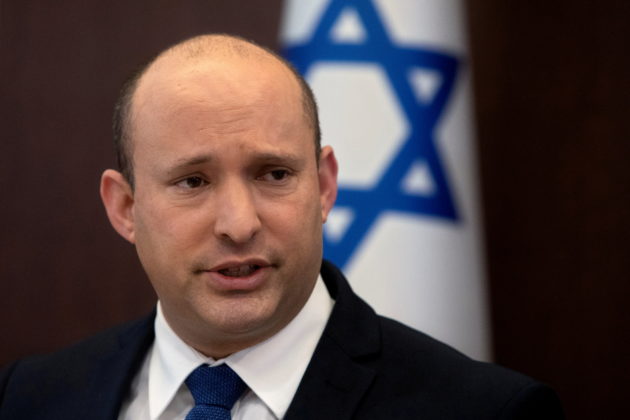 NEW YORK (Reuters) -Israeli Prime Minister Naftali Bennett said on Monday that Iran had crossed “all red lines” in its nuclear program and vowed that Israel would not allow Tehran to acquire a nuclear weapon.

In his first speech before the United Nations General Assembly, Bennett said Iran sought to dominate the Middle East under a “nuclear umbrella” and urged a more concerted international effort to halt Iran’s nuclear activities.

But he also hinted at the potential for Israel to act on its own against Iran, something it has repeatedly threatened in the past.

“Iran’s nuclear program has hit a watershed moment, and so has our tolerance,” Bennett said. “Words do not stop centrifuges from spinning.”

Indirect U.S.-Iran talks in Vienna have stalled as Washington awaits the next move by Iran’s new hardline president, Ebrahim Raisi.

Bennett struck a less combative tone before the United Nations than Netanyahu, who often relied on props and visual aids to dramatize his accusations against Iran, an approach that critics derided as political stunts.

But Bennett has been just as adamant as Netanyahu was in pledging to do whatever is necessary to prevent Iran, which Israel views as an existential threat, from building a nuclear weapon. Iran consistently denies it is seeking a bomb.

“Iran’s nuclear weapons program is at a critical point. All red lines have been crossed, inspections ignored,” Bennett said. “They’re getting away with it.”

(Reporting by Michelle Nichols at the UN, Matt Spetalnick in Washington and Stephen Farrell in London, additional reporting by Zainah El-Haroun and Ari Rabinovitch in Jerusalem; Editing by Alex Richardson)