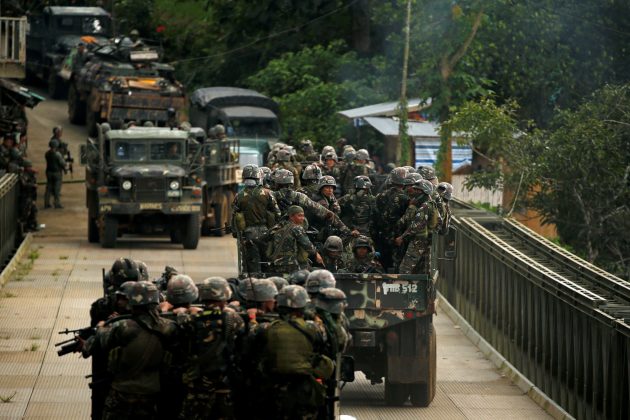 JAKARTA (Reuters) – As a lengthy, urban battle drags on between Philippine forces and Islamist militants in the southern city of Marawi, a new report by a think-tank has warned of more attacks by radicals in Southeast Asia, including on foreigners.

A coalition of Philippine militant groups, augmented by foreign fighters, stormed Marawi, on the island on Mindanao, nearly two months ago. The militants, who claim allegiance to Islamic State (IS), still control a portion of the city despite a sustained military offensive.

There have been similar attacks in the Philippines since last year, but the duration and ferocity of the fighting in Marawi has alarmed Southeast Asian nations and led to fears the assault could inspire and unite the region’s disparate Islamist groups.

“The risks won’t end when the military declares victory,” said Sidney Jones, director of the Institute of Policy Analysis of Conflict, adding that threats would mount in neighboring Indonesia and Malaysia, both Muslim-majority nations.

“Indonesia and Malaysia will face new threats in the form of returning fighters from Mindanao, and the Philippines will have a host of smaller dispersed cells with the capacity for both violence and indoctrination.”

The Marawi siege had united two feuding pro-IS factions in Indonesia, the world’s most-populous Muslim-majority nation, and led to soul-searching among militants there “about why they cannot manage to do anything as spectacular”, the report said.

“Once the battle for Marawi is over, it is possible that Southeast Asian ISIS leaders (in Syria) might encourage Indonesians to go after other targets, including foreigners or foreign institutions – especially if one of them comes back to lead the operations,” the report added, using another acronym for the Islamic State.

Asked about an elevated threat in Indonesia, including for foreigners, police spokesman Setyo Wasisto said: “We will stay cautious, increase our alertness and monitor the movement of those who come home from Marawi.”

Malaysia’s police counter-terrorism chief declined comment. Authorities in the Philippines did not immediately respond to requests for comment.

Authorities estimate about 20 Indonesian militants were involved in the fighting in Marawi but it is not clear how many survived.

About 565 people have died in nearly two months of fighting in Marawi, according to officials, including over 420 militants, 45 civilians and almost 100 Philippines military and police.

After missing several deadlines for re-taking Marawi, Philippine officials say it is not possible to say when the fighting will end.

National Security Adviser Hermogenes Esperon told reporters on Friday a hard core of fighters has been hemmed in to three barangays, or urban villages, down from the 12 they held earlier. Marawi has 96 such barangays.

In a key revelation, the IPAC report tracked the chain of command for the Marawi operations.

At its apex was Islamic State “Central” in Syria, represented by Katibah Nusantara, the IS military unit made up of fighters from Southeast Asia and led by Indonesian militant Bahrumsyah, likely the highest ranked member of IS from the region, it said.

Mahmud “controlled recruitment as well as financing and has been the contact person for any foreigner wanting to join the pro-ISIS forces in the Philippines”, the report said.

Tactical decisions on the ground were made by local militant commanders but the report said “the Syria-based Southeast Asians could have a say in setting strategy for (the) region when the siege is over.”

The report warned the devastating damage to the city from Philippines military air strikes was being exploited by militant ideologues.

It cited a post on the social media platform Telegram, a message presumed to be from a militant, that said: “We did not bomb it to ashes”.

“We ordained good and forbade evil … but the response of the Crusader Army was brutal.”

The Philippines military has defended the use of air strikes in its offensive, noting that militant snipers positioned on top of buildings made it difficult for ground troops to make headway in the dense urban environment.