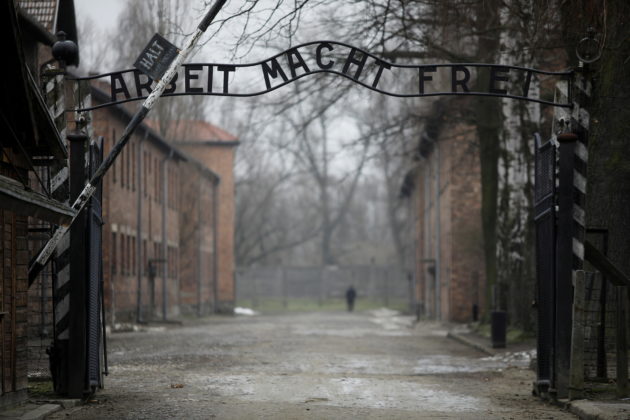 The "Arbeit macht frei" (Work sets you free) gate is pictured on the site of the former Nazi German concentration and extermination camp Auschwitz, empty due to COVID-19 restrictions, two days before the 76th virtual anniversary of the liberation of the camp in Oswiecim, Poland, January 25, 2021. Picture taken January 25, 2021. REUTERS/Kacper Pempel

By Kacper Pempel and Joanna Plucinska

OSWIECIM, Poland (Reuters) – Marian Turski, a 94-year-old survivor of the Auschwitz death camp, was marking the 76th anniversary of its liberation by Soviet troops on Wednesday only virtually, aware that he might never return as the coronavirus pandemic drags on.

Survivors and museum officials told Reuters they fear the pandemic could end the era where Auschwitz’s former prisoners can tell their own stories to visitors on site. Most Auschwitz survivors are in their eighties and nineties.

“Even if there was no pandemic, there would be fewer survivors at every anniversary,” Turski told Reuters in a Zoom interview from his Warsaw home.

“People at my age who are already vulnerable to many other illnesses are also in the first line of fire for this virus.”

He declined an in-person interview, in part due to the pandemic risks.

The Auschwitz-Birkenau Museum and Memorial preserves the Auschwitz death camp set up on Polish soil by Nazi Germany during World War Two. More than 1.1 million people, most of them Jews, perished in gas chambers at the camp or from starvation, cold and disease.

Wednesday’s ceremony marking the camp’s liberation will take place virtually starting at 1500 GMT, with speeches by survivors, Poland’s President Andrzej Duda and Israeli and Russian diplomats, as well as a debate on the Holocaust’s influence on children.

The Museum’s director, Piotr Cywinski, acknowledged virtual events and education programs were not as effective in passing on the lessons of the Holocaust and World War Two.

“Nothing will replace witnessing the place in its authentic state, because this isn’t just about seeing and listening. This is about looking around, in your own steps, touching, experiencing different perspectives, understanding,” Cywinski told Reuters.

Survivors emphasized the importance of finding ways to keep Auschwitz relevant after they can no longer tell their own stories, amid a rise in far-right movements and anti-Semitism.

In Germany, former finance minister and now president of the lower house of parliament, Wolfgang Schaeuble, warned that “our culture of remembrance does not protect us from a brazen reinterpretation and even a denial of history”.

He added that racism and anti-Semitism were spreading through internet forums and conspiracy theories, stressing society’s collective responsibility to honor the memory of the Holocaust.

Some Auschwitz survivors, like Bogdan Bartnikowski, 89, said they were optimistic that the pandemic would not end their chances of returning to the memorial and telling their stories.

“I have hope that for sure there will continue to be groups of visitors to the museum,” Bartnikowski said. “Us former prisoners will not be lacking.”