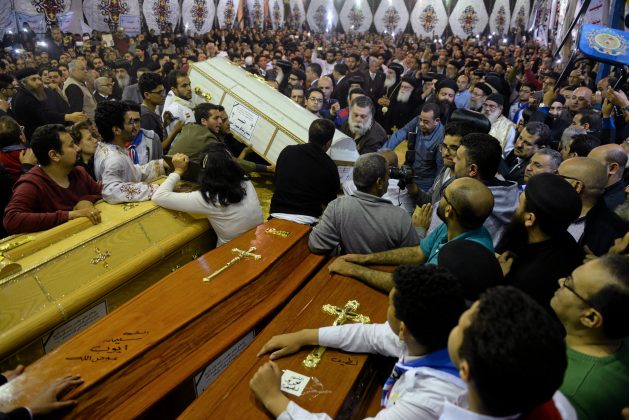 People watch as the coffins of victims arrive to the Coptic church that was bombed on Sunday, in Tanta, Egypt, April 9, 2017. REUTERS/Mohamed Abd El Ghany

CAIRO (Reuters) – Islamic State’s leader in Egypt has warned Muslims to stay away from Christian gatherings as well as government, military and police facilities, suggesting that the militant group will keep up attacks on what he referred to as “legitimate targets”.

In April, two Islamic State suicide bombers killed at least 45 people at churches in the cities of Alexandria and Tanta, one of the bloodiest attacks the country has experienced in years.

“We are warning you to stay away from Christian gatherings, as well as the gatherings of the army and the police, and the areas that have political government facilities,” the leader, who was not named, said in an interview in Islamic State’s Al Naba weekly newspaper published on Telegram.

Islamist militants are increasingly targeting religious minorities, a challenge to President Abdel Fattah al-Sisi, who has promised to protect them from extremism.

Islamic State has been turning its sights on targets outside its base in the Sinai, putting more pressure on the government and presenting extra challenges for security services.