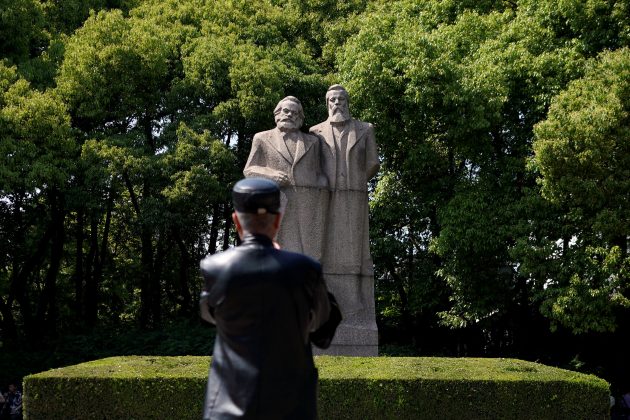 A man walks in front of the statue of German philosophers Karl Marx and Friedrich Engels at a park in Shanghai, China May 3, 2018. REUTERS/Aly Song

BEIJING (Reuters) – With chat shows claiming “Marx was Right” and cartoons of his wild youth, China has gone to great lengths to show that the theories of German philosopher Karl Marx are still relevant today, ahead of the 200th anniversary of his birth on Saturday.

Since coming to power in 2012, President Xi Jinping, widely seen as the most powerful Chinese leader since Mao Zedong, has said the party must not forget its socialist roots as it works to bring about the “great rejuvenation of the Chinese nation”.

Today, China, the largest self-identified socialist country, outwardly displays all the trappings of a modern capitalist society, from rampant consumption to a massive gap between the urban elite and rural poor.

The apparent contradiction between party rhetoric and appearance has led many observers to suggest that the party is no longer really motivated by Marxism and instead places practical and economic concerns above all else.

But Xi has embraced the party’s founding ideology and has re-introduced study sessions that hark back to the Mao era, as he stresses the need for China to be confident of its revolutionary history and political system.

In a Wednesday visit to the prestigious Peking University, Xi said the institution should be proud of its role in spreading Marxism, which led to the founding of the Chinese Communist Party in 1921.

“We must grasp Marxist theory and education, deepen students’ understanding of the theoretical and practical meaning of Marxism, as well as its historic necessity and scientific accuracy,” Xi said, according to the official Xinhua news agency.

Much of the propaganda around the anniversary has cast Marx as being appealing to the young.

A chat show called “Marx was Right” from the state broadcaster released this week introduced his theories to students who then told the host why Marx mattered to them.

After an essay from the 17-year-old Marx was read to the audience, the host asked if the audience were as moved by his words as she was.

“I think Marx truly is really amazing,” Xing Kaichen, a student at the Communication University of China, replied. “I think all people should learn from him.”

The official publication of China’s top anti-graft watchdog invited readers to learn about Marx’s human side in a series of cartoons about his marriage and his youth – including when he was detained for being disorderly while drunk.

Aside from popularizing Marx, the propaganda has also attempted to show how his ideas are still relevant today.

“The world is at a crossroads,” the official People’s Daily said in a front page commentary on Wednesday, with Brexit, constant terrorist attacks and fighting in Syria demonstrating the “political deficiencies” of the West.

China’s governance, in contrast, “elegantly proves that Marxism has not stopped being true but has rather led to the true path”, it added.