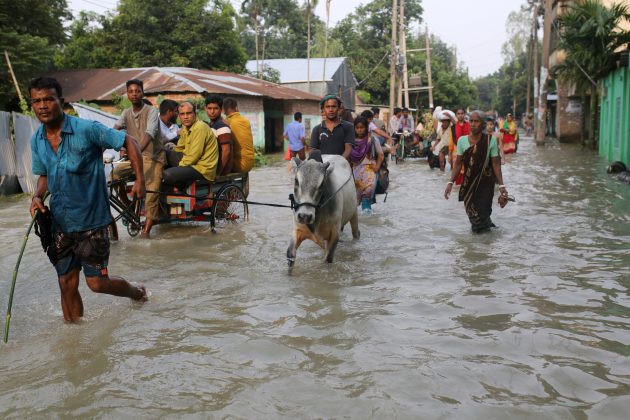 People move along a flooded road in Gaibandha, Bangladesh July 18, 2019. REUTERS/Stringer NO RESALES. NO ARCHIVES

DHAKA/GUWAHATI, INDIA (Reuters) – One of Bangladesh’s main rivers breached an embankment, flooding a northern district and forcing thousands from their homes, an official said on Thursday, as the toll from monsoon rains in neighboring India climbed to 97 in two flood-hit states.

Several million people are living in camps and makeshift settlements in India’s eastern state of Bihar and northeastern Assam, officials said, with heavy rains and flooding since last week driving even animals to seek shelter in people’s homes.

The monsoon brings heavy rains to South Asia between June and October, often triggering floods later in the season.

In Bangladesh, the Jamuna river broke through an embankment on Wednesday night, inundating at least 40 villages and displacing more than 200,000 people, government official Rokhsana Begum said.

“We have enough supply of dry food and drinking water but we cannot reach many areas due to high water levels,” said the official in the district of Gaibandha, one of 21 hit by floods.

Inadequate supplies are also a concern in the Indian state of Assam, where more than 5.8 million people have been forced out of their homes, but the situation is improving.

The state’s Kaziranga National Park, home to endangered one-horned rhinos and tigers, was waist-deep in water, with animals sheltering in higher areas, and some straying into villages.

On Thursday, an adult tiger was found sleeping on a bed in a house on the edge of the sanctuary. “It appears the tiger strayed into a human settlement area to escape the floods and now appears very tired,” park director Shiv Kumar told Reuters.

“We are preparing to tranquilize the tiger.”

The floods have killed at least 43 animals, but authorities worry that poachers could take advantage of the deluge to target animals, especially one-horned rhinos, whose numbers are down to about 3,500 worldwide. 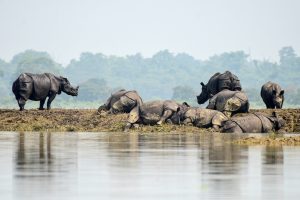 One-horned rhinos rest on a highland in the flood affected area of Kaziranga National Park in Nagaon district, in the northeastern state of Assam, India, July 18, 2019. REUTERS/Anuwar Hazarika

“The biggest worry during the floods is from poachers who might take advantage of the rhinos moving to the hills and kill the animals for their horn,” said Assam Forest Minister Parimal Suklabaidya.

The death toll in Bihar, which was swamped by waters from the neighboring Himalayan nation of Nepal, jumped to 67, as rescuers reached further into flood-hit areas.

“I still feel the chances are that the number may again increase,” Pratyaya Amrit, a state disaster management official, told Reuters, referring to the death toll.