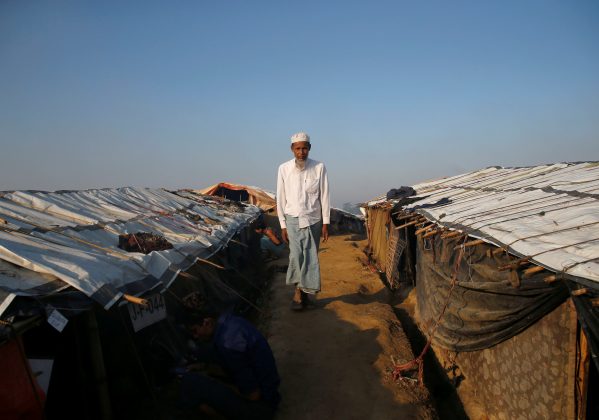 DHAKA (Reuters) – Bangladesh could start relocating Rohingya Muslim refugees to a flood-prone island off its coast in the middle of next year, a government official said on Thursday, as it pushes ahead with the plan despite criticism from aid agencies and rights groups.

Densely populated Bangladesh has seen an influx of more than 620,000 Rohingya to its southern-most district of Cox’s Bazar, fleeing violence in neighboring Myanmar, since August.

This week, it approved a $280 million plan to develop the low-lying Bhashan Char island to temporarily house some of them until they can go home.

The Bay of Bengal island, also known as Thenger Char, only emerged from the silt off Bangladesh’s delta coast about 11 years ago.

Two hours by boat from the nearest settlement, the island has no roads or buildings and it regularly floods during the rough seas of the June-September rainy season.

When the sea is calm, pirates roam the waters in the vicinity to kidnap fishermen for ransom.

“We can’t keep such a large number of people in this small area of Cox’s Bazar where their presence is having a devastating effect on the situation on the ground environmentally, population wise and economically,” H.T. Imam, Prime Minister Sheikh Hasina’s political adviser, told Reuters on Thursday.

“So, as quickly as we can shift at least some of the burden over to Bhashan Char, that will minimize the problem.”

Rohingya have fled repression in Buddhist-majority Myanmar several times since the 1970s, and almost one most million of them live in crowded camps in Cox’s Bazar.

Mainly Muslim Bangladesh has said it aims to move about 100,000 refugees to the island.

Some aid officials speculate that by raising the island plan, Bangladesh could be trying to put pressure on the international community to find a better solution to the crisis.

But Imam, who holds the rank of cabinet minister, has denied any such tactic.

He said the navy had started work on developing the island, money for which will come from the government.

Bangladesh, however, would need financial and other help from aid agencies to move the refugees to the island, he said.

“There are some organizations which have assured help but I won’t specify who they are,” Imam said.

Humanitarian agencies, however, have criticized the plan since it was first floated in 2015.

“Having opened its doors to more than 600,000 Rohingya over the past three months, the Bangladesh government now risks undermining the protection of the Rohingya and squandering the international goodwill it has earned,” said Biraj Patnaik, Amnesty International’s South Asia Director, referring to the plan to move people to the island.

“In its desperation to see the Rohingya leave the camps and ultimately return to Myanmar, it is putting their safety and well-being at risk.”

Myanmar and Bangladesh signed an accord last week on terms for the return of hundreds of thousands of Rohingya, though rights groups have expressed doubts about Myanmar following through on the agreement and have called for independent observers for any repatriation.

There are concerns about protection for Rohingya from further violence if and when they go home, and about a path to resolving their legal status – most are stateless – and whether they would be allowed to return to their old homes.

Imam said Bangladesh was working on those issues but did not give details.

“In diplomacy, there are a lot of things that happen but then you don’t pronounce them publicly,” he said. “A lot of back-door diplomatic work is being done. People are involved at the highest level.”

For a graphic on Bangladesh’s Rohingya relocation plan, click http://tmsnrt.rs/2kULcWn