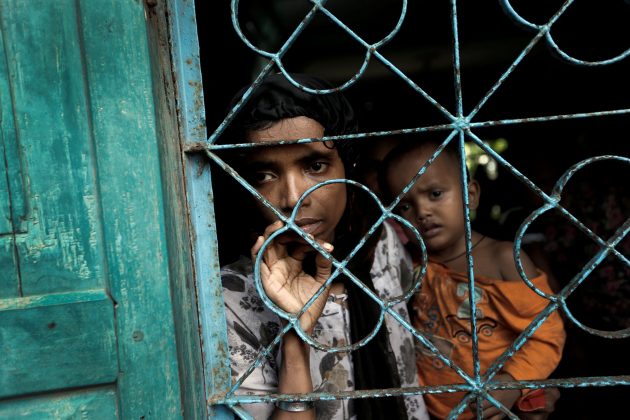 A newly arrived Rohingya refugee waits to be transferred to a camp in Cox's Bazar, Bangladesh, October 2, 2017. REUTERS/Cathal McNaughton TPX IMAGES OF THE DAY

DHAKA (Reuters) – Bangladesh and Myanmar agreed on Monday to set up a “working group” to plan the repatriation of more than half a million Rohingya Muslim refugees who have fled to Bangladesh to escape an army crackdown, the Bangladeshi foreign minister said.

The United Nations has called the exodus of 507,000 Rohingya since late August the world’s fastest-developing refugee emergency, and says Buddhist-majority Myanmar is engaging in ethnic cleansing against its Rohingya Muslim minority.

Myanmar denies that. It says its forces are battling Rohingya “terrorists” who triggered the latest wave of violence with coordinated attacks on the security forces on Aug. 25.

Myanmar says more than 500 people have been killed since, most of them insurgents, whom it has accused of attacking civilians and setting most of the fires that have reduced to ashes more than half of more than 400 Rohingya villages in the north of Rakhine State.

Bangladesh Foreign Minister Abul Hassan Mahmood Ali said he and Myanmar official Kyaw Tint Swe had agreed in their talks to set up the working group to draw up plans for repatriation.

“We are looking forward to a peaceful solution to the crisis,” Ali told reporters.

Kyaw Tint Swe did not speak to the media and government spokesmen in Myanmar were not immediately available for comment.

Waves of Rohingya have taken refuge in Bangladesh over the years complaining of persecution, in particular in the late 1970s, the early 1990s and in October last year, following smaller insurgent attacks on the security forces.

The neighbors have agreed on repatriation plans before, but the fundamental problem – the status of Rohingya in Myanmar – remains unsettled.

The Rohingya are denied citizenship and classified as illegal immigrants, despite claiming roots in Myanmar that go back centuries, with communities marginalized and subjected to bouts of communal violence over the years.

Ali, asked about agreements in the past having little impact, said: “This time we want to be hopeful.”

In Geneva, U.N. High Commissioner for Refugees Filippo Grandi told a meeting problems of statelessness had to be tackled.

“Nowhere is the link between statelessness and displacement more evident than with the Rohingya community,” he said. 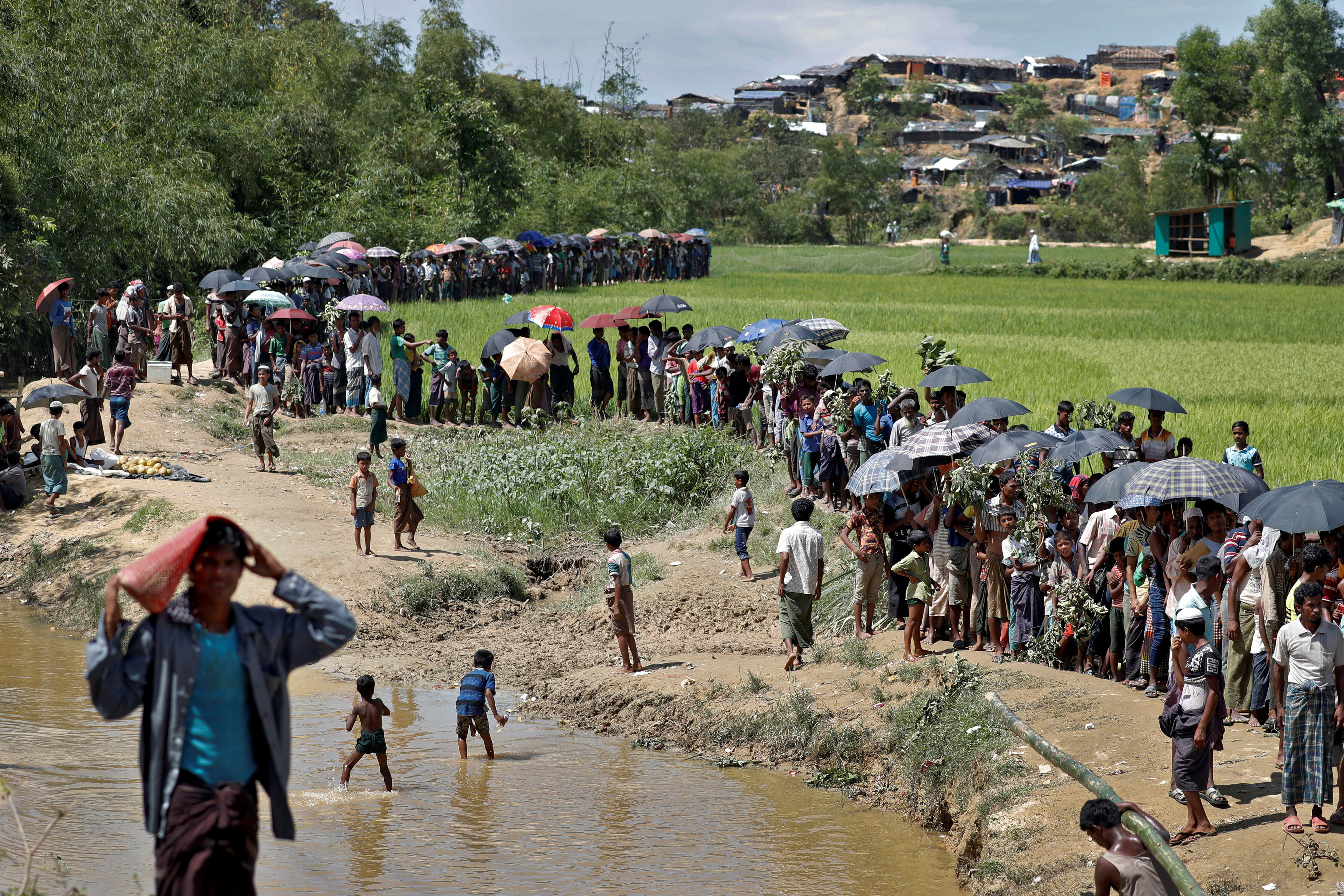 The crisis over the treatment of the Rohingya is the biggest problem Myanmar leader Aung San Suu Kyi has had to face since forming a government last year after winning a landmark 2015 election.

The Nobel peace laureate, in an address to the nation last month, said Myanmar was ready to start a verification process under a 1993 agreement with Bangladesh and “refugees from this country will be accepted without any problem”.

But many refugees are gloomy about the prospects of going back, fearing they will not be able to furnish the documents they anticipate Myanmar will demand to prove they have a right to return.

Myanmar has refused to grant access to a U.N. fact-finding mission but Suu Kyi last year appointed a team led by former U.N. secretary-general Kofi Annan to draw up recommendations on solving problems in Rakhine.

The commission presented its recommendations on Aug. 24, a day before the insurgent attacks, among them a review of a law that links citizenship and ethnicity and leaves most Rohingya stateless.

The panel also recommended that the government punish rights violations, ensure the right to freedom of movement and invest in infrastructure to lift the state out of poverty.

Suu Kyi, in her address to the nation last month, said she was committed to the recommendations.

There were already about 300,000 Rohingya refugees in Bangladesh before the latest exodus. 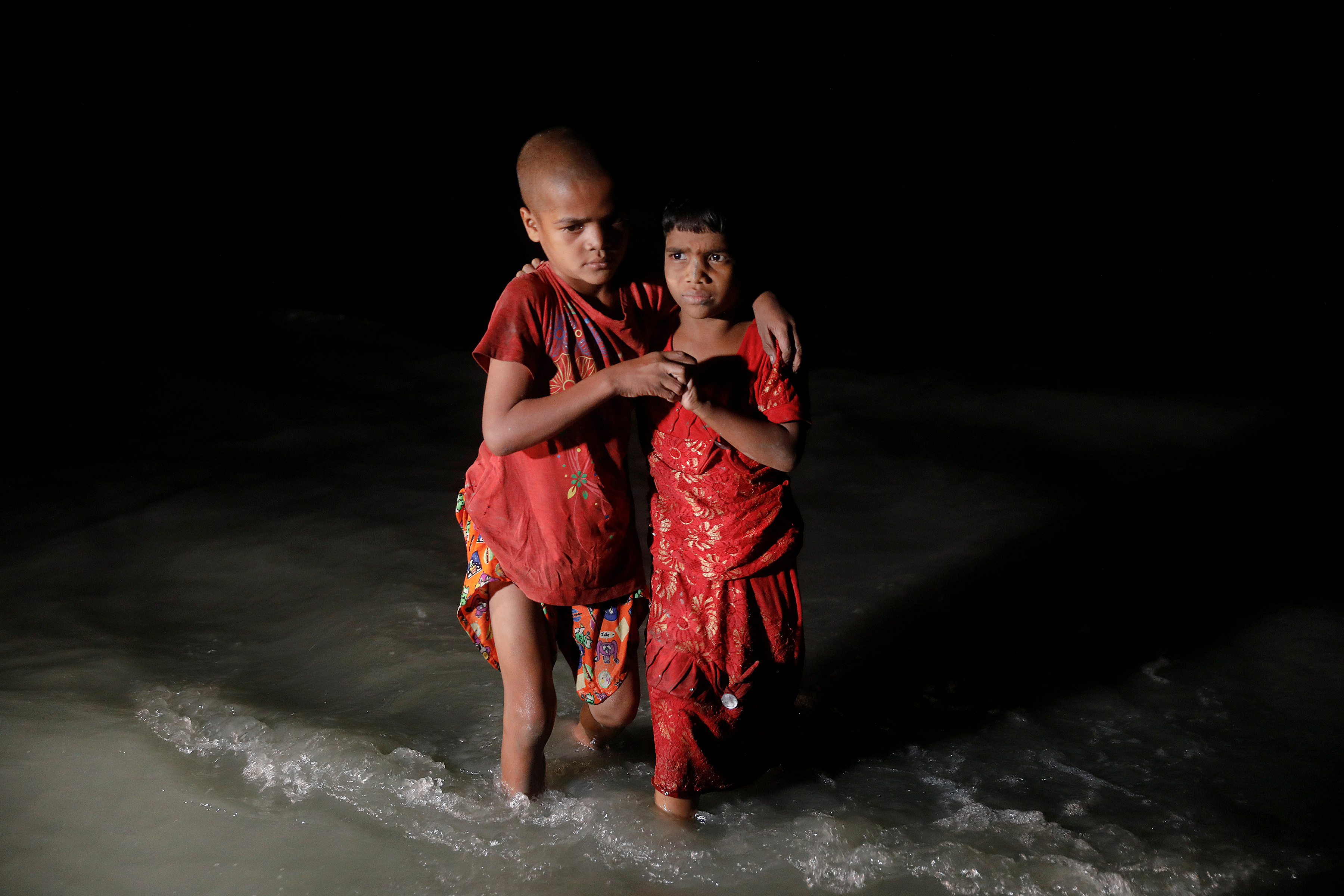 Rohingya refugee sisters, who just arrived under the cover of darkness by wooden boats from Myanmar, hug each other as they try to find their parents at Shah Porir Dwip, in Teknaf, near Cox’s Bazar in Bangladesh.
REUTERS/Damir Sagolj

In Myanmar, the government took a group of diplomats and senior U.N. officials to Rakhine to let them see the situation.

“Maungdaw feels like a ghost town,” Swiss ambassador Paul Seger said on Twitter, as he arrived in a main town in the north of Rakhine.

Myanmar has blocked most aid workers and the media from the area, despite calls from Western countries for access to deal with what aid groups fear is an unfolding humanitarian crisis.

The diplomats were taken to various places including the Rohingya village of Ah Nauk Pyin, which Reuters reported last month was cut off and threatened by hostile Rakhine Buddhist neighbors. An itinerary of the trip referred to the report.

After the visit, the United Nations repeated a call for an end to the violence, for access to the conflict zone for aid workers and for the safe return of refugees.

“The U.N. delegation reiterated the need for a greater access for humanitarian and human rights actors to conduct comprehensive assessments the situation,” it said in a statement. It also said the media should have access.

Suu Kyi has been accused by Western critics of not speaking out strongly enough on behalf of the long-persecuted minority and of defending the army action. She has no power over security policy under a military-drafted constitution.