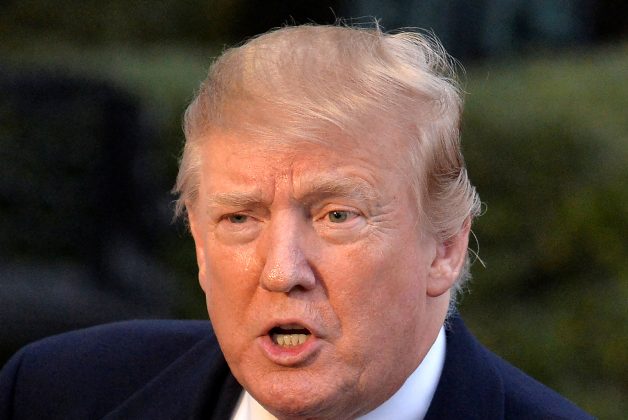 FILE PHOTO - U.S. President Donald Trump makes brief remarks to the press on Special Counsel Robert Mueller's investigation as he arrives on the South Lawn of the White House in Washington, U.S., after returning from a weekend at his Mar-a-Lago estate in Florida, March 24, 2019. REUTERS/Mike Theiler

WASHINGTON (Reuters) – U.S. Attorney General William Barr plans to issue in a matter of weeks a public version of the special counsel’s report that found President Donald Trump’s 2016 campaign team did not conspire with Russia, as Trump sought to capitalize on the conclusions.

Democrats attempted to change the subject to healthcare after the report from Robert Mueller appeared to shatter their case that Trump was an illegitimately elected president.

Barr released his own summary of the report’s central findings on Sunday but said he needed more time to review the report to determine how much of it could be made public.

A Justice Department official said on Tuesday that Barr’s plan was to release a public version in “weeks, not months.” Congressional Democrats have demanded Barr turn over the report to them by April 2, which would only leave a week for the Justice Department to complete its review.

The Justice official said there was no plan to share an advance copy of the report with the White House.

Some portions of Mueller’s confidential report contain materials that arose during secret grand jury proceedings. Federal rules generally prohibit the government from releasing that information to the public.

Barr has not yet revealed a precise date for when the final public version might be ready.

The Justice Department has not commented on the Democrats’ request that it be released to Congress by next week.

Trump and his top aides attacked unidentified political opponents for starting the campaign investigation, calling the actions treasonous and worth probing.

“I think what happened was a disgrace,” Trump told reporters on a visit to the U.S. Capitol, where he had lunch with Republican senators.

Republicans also were out for retribution, with Senate Majority Leader Mitch McConnell saying he supported a push for an inquiry into potential missteps by law enforcement officials in their probe of Trump.

Senator Chuck Schumer, leader of the Democratic minority in the Senate, leaped on a court filing from the Justice Department that said the entire Obamacare healthcare law – the signature legislative accomplishment of Democratic President Barack Obama – should be struck down in the courts.

The law provides healthcare coverage for an estimated 20 million people, and Trump and his Republican allies, who see it as government overreach, have failed to replace it despite vows to do so.

“It is a stark reminder of the difference between our two parties: Democrats are fighting to expand and improve healthcare coverage and lower costs while Republicans are trying to take it all away and raise costs,” Schumer said on the Senate floor.

Republicans said during their lunch with Trump they discussed ways to improve the healthcare system.

“We’ve got to be the party of healthcare,” said Republican U.S. Senator Lindsey Graham, a Trump ally.