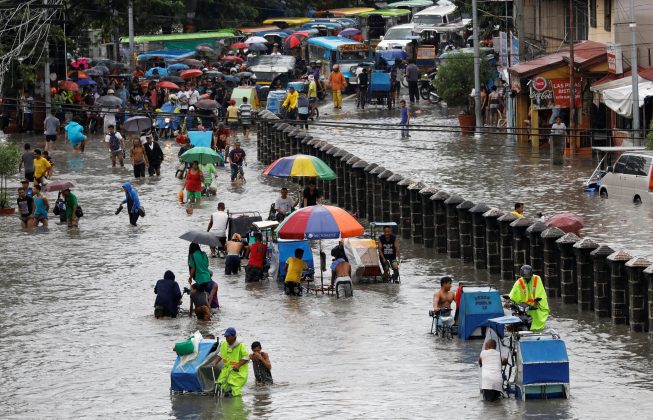 Residents wade and ride on pedicabs along a partially flooded road, in Las Pinas Metro Manila as a storm sweeps across the main Luzon island, Philippines, September 12, 2017. REUTERS/Erik De Castro

MANILA (Reuters) – A cyclone dumped heavy rains in the Philippine capital, Manila, and nearby provinces on Tuesday, causing widespread flooding and landslides in some areas that killed at least two people, the national disaster agency said.

Financial markets, government offices and schools were closed and port operations in some provinces were suspended, it said. Several flights were canceled.

The weather bureau said cyclone Maring, which was packing winds of up to 60 kilometers per hour (37 mph), made landfall in the morning over Mauban municipality in the eastern province of Quezon.

“Some residents unfortunately did not heed the advice of local officials to evacuate to safer grounds,” she said in a media briefing.

Marasigan warned of more flashfloods and landslides as rains were expected to continue later in the day, before the cyclone moves back over the sea early on Wednesday.

Twenty-two passengers were rescued from a bus stuck in floodwaters in Pitogo town in Quezon, she said.

Local officials ordered the evacuation of residents in some towns under floodwaters in Quezon, Laguna, Rizal and Batangas provinces, she said.

The weather bureau said it was also keeping an eye on typhoon Talim which was packing winds of up to 120 kph (75 mph), spotted moving toward the country’s northern tip and to Taiwan.