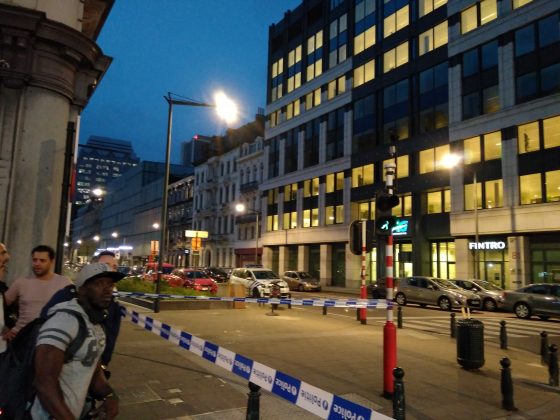 People walk next to the scene where a man attacked two soldiers with a knife in Brussels, Belgium August 25, 2017 in this picture obtained from social media. Picture taken August 25, 2017. Thomas Da Silva Rosa /via REUTERS

BRUSSELS (Reuters) – Belgian authorities on Saturday launched twin investigations into a knife attack they consider to be an act of terrorism and released more details of the suspect shot dead by soldiers in central Brussels.

Federal prosecutors said that they had requested an investigating judge look into the incident on Friday that they said constituted attempted murder.

A second investigation would look at the soldiers’ response.

The man shouted “Allahu Akbar” (God is great) as he stabbed the soldiers, one of whom shot him twice.

The assailant died shortly afterwards in hospital. Investigators then found a fake firearm and two copies of the Koran among his possessions.

They said the man, aged 30 and of Somali origin, had come to Belgium in 2004. Migration Minister Theo Francken said the man had been granted asylum in 2009 and gained Belgian citizenship in 2015.

Investigators also searched the man’s home in the northern city of Bruges, prosecutors said, without giving any details of what they had found.

They added the man was not known to have any links to Islamist militancy, but had committed an act of assault and battery in February this year.

Brussels prosecutors said they had started an investigation into whether the soldier who killed the man had acted correctly.

“It appears that the soldier twice shot the suspect who had attacked them with a knife. These shots were fired in the context of self-defense and according to the rules of engagement,” the prosecution service said in a statement.

It added that an autopsy would be carried out on Saturday. Prosecutors would take a final decision based on this and a report by a ballistics expert.

Soldiers routinely patrol the streets of the Belgian capital due to a heightened security alert level after Islamist shooting and bomb attacks in Paris in 2015 and Brussels in 2016.

In June, troops shot dead a suspected suicide bomber at Brussels’ central train station. There were no other casualties. Authorities treated the incident as an attempted terrorist attack.