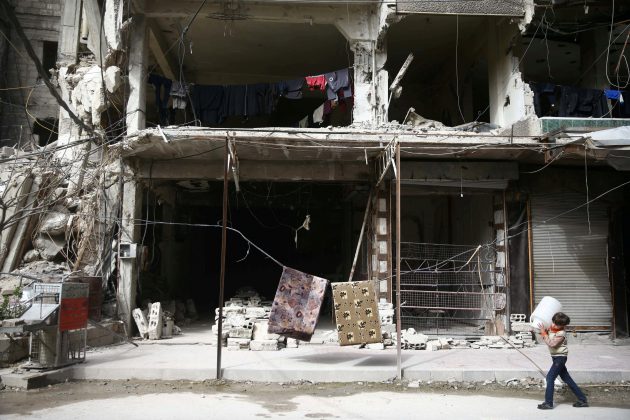 AMMAN/BEIRUT (Reuters) – Thousands of families are sleeping in the open in the streets of the biggest town of Syria’s rebel-held eastern Ghouta enclave, where there is no longer any room in packed cellars to shelter from government bombardment, local authorities said.

The army’s onslaught in eastern Ghouta, backed by air and artillery strikes, has killed about 1,160 people since Feb. 18, a war monitor said, as President Bashar al-Assad seeks to crush the last big rebel stronghold near the capital Damascus.

Thousands of families have fled from the front lines to Douma, hoping to escape bombing. The town’s opposition-controlled authorities said on Monday the situation there had become “catastrophic”, with no more room below ground for civilians to hide.

At least 70 people had been buried in a park because air strikes made it unsafe to reach the cemetery on the outskirts.

Government forces have now captured more than half the rebel enclave, entirely besieging Douma and the large town of Harasta, cutting them off from each other and neighbouring areas with advances on Saturday and Sunday.

“After more than 20 days of the barbaric campaign and mass annihilation of eastern Ghouta.. this has led to a deterioration of the humanitarian and food situation to a catastrophic level,” Douma’s town council said in a statement.

In video filmed inside the town, one man cowering in a heavily damaged shelter in Douma said: “It is completely uninhabitable. It is not even safe to put chickens in. There is no bathroom, just one toilet, and there are 300 people.”

He declined to give his name for fear of reprisals if the army retakes the area.

Douma residents said dozens of people were trapped alive under rubble, with rescuers unable to reach them due to the intensity of the raids. They also said the loss of remaining farmland to Assad forces would worsen the plight of civilians.

State television broadcasts from the government-controlled side of the battlefront showed dark grey clouds of smoke billowing from several places across a landscape of shattered buildings. A minaret had lost a chunk from one side of its slender tower. In the background, heavy vehicles could be heard rumbling past and the deep crump of explosions echoed around.

Jaish al-Islam, one of eastern Ghouta’s main rebel groups, said on Monday it had reached an agreement with the government’s ally Russia to evacuate wounded people, after communicating with Moscow through the United Nations.

The assault is one of the heaviest in the war, which enters its eighth year this week. The Syrian Observatory for Human Rights, a Britain-based war monitor, said on Monday for the first time that the death toll had passed half a million people.

It has confirmed the deaths of 511,000 people, it said, and has the names of more than 350,000 of them. About 85 percent were killed by government forces and their allies, it said.

Eastern Ghouta has been besieged for years after many of its residents joined the initial protests against Assad’s rule in 2011 that triggered the slide into civil war. The United Nations says 400,000 people live in the enclave, already suffering shortages of food and medicine even before the massive assault began in mid-February.

Assad and his ally Russia say the assault on eastern Ghouta is needed to end the rule of Islamist insurgents over the civilian population and to stop mortar fire on nearby Damascus.

The ferocity of the assault has prompted condemnation from Western countries and calls from U.N. agencies for a ceasefire. Russia and Damascus say a ceasefire ordered by the U.N. Security Council does not protect the fighters in eastern Ghouta, arguing that they are members of banned terrorist groups.

The United Nations has warned of dire shortages of food and medicine, where international deliveries have long been erratic and often obstructed before they could reach the enclave. A convoy of relief trucks crossed front lines into eastern Ghouta on Friday and unloaded all its food despite the fighting.

The expulsion of the rebels from eastern Ghouta would represent their biggest defeat since they lost their enclave in Aleppo in December 2016. They still control large areas in the northwest and southwest and a few scattered pockets elsewhere but have been driven from most major population centres.

Across eastern Ghouta heavy aerial strikes continued on the towns of Irbeen, Harasta and other residential areas on Monday, state media said. [L8N1QT07W]