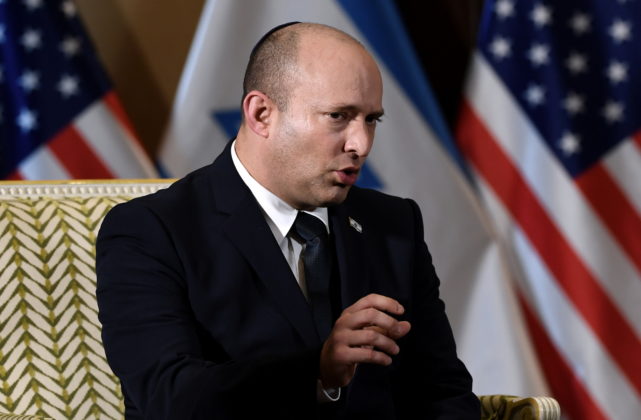 By Trevor Hunnicutt and Matt Spetalnick

WASHINGTON (Reuters) -President Joe Biden and Israeli Prime Minister Naftali Bennett began their first White House meeting on Friday, with Iran topping the agenda, even as the U.S. leader grappled with the aftermath of a deadly suicide bombing in Kabul during the chaotic U.S. evacuation from Afghanistan.

After a one-day delay due to the Islamic State attack that killed 13 U.S. troops and 72 Afghans, Biden and Bennett met to reset the tone of U.S.-Israeli relations and search for common ground on Iran despite differences on how to address Tehran’s nuclear program.

Tensions complicated relations between Bennett’s predecessor, Benjamin Netanyahu, who was close to former President Donald Trump, and the last Democratic administration led by Barack Obama with Biden as his vice president.

But the meeting, the first since the two men took office this year, was eclipsed by Thursday’s attack outside Kabul airport during a U.S. withdrawal that has posed the biggest crisis of Biden’s young presidency.

U.S. forces helping to evacuate Afghans desperate to flee new Taliban rule were on alert for more attacks on Friday.

Biden called the Israeli leader and “thanked (him) for his understanding of the change in time of their meeting, in light of the events in Afghanistan,” Bennett’s office said in a statement.

He said Israel shared America’s sorrow over the deaths.

The delay means that Bennett, an Orthodox Jew who does not travel on the Sabbath, will remain in Washington until after sundown on Saturday.

Iran, one of the thorniest issues between the Biden administration and Israel, was expected to be the main focus of their talks.

Bennett, a far-right politician who ended Netanyahu’s 12-year run as prime minister in June, intended to press Biden to harden his approach to Iran and back out of negotiations to revive an international nuclear deal with Tehran that Trump abandoned.

Biden was expected to tell Bennett that he shares Israel’s concern that Iran has expanded its nuclear program but remains committed for now to diplomacy with Tehran, a senior administration official said earlier.

Bennett has sought to move on from Netanyahu’s combative style and instead manage disagreements behind closed doors.

But he has been just as adamant as Netanyahu was in pledging to do whatever is necessary to prevent Iran, which Israel views as an existential threat, from building a nuclear weapon. Iran consistently denies it is seeking a bomb.

The visit gave Biden an opportunity to demonstrate business as usual with a key partner while contending with the volatile situation in Afghanistan.

On the Israeli-Palestinian conflict, Biden and Bennett are also far apart. Biden has renewed backing for a two-state solution after Trump distanced himself from that longstanding tenet of U.S. policy. Bennett opposes Palestinian statehood.