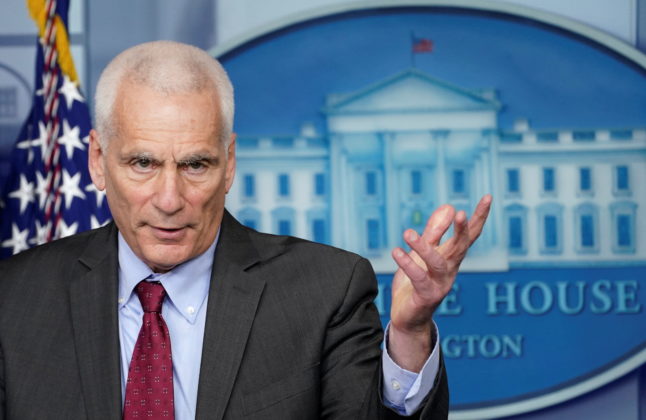 WASHINGTON (Reuters) -President Joe Biden on Friday predicted a “long way to go” for U.S. economic recovery from a pandemic-spurred slump and urged Washington to do more to help the American people after a disappointing jobs report.

Biden and his team have said his $1.9 trillion pandemic relief package, the Democratic president’s first major legislative accomplishment, is helping to bring the economy back from its pandemic plummet.

“Today’s report just underscores in my view how vital the actions we’re taking are,” Biden said in remarks at the White House. “Our efforts are starting to work. But the climb is steep and we still have a long way to go.”

The White House is pressing for trillions of dollars more in spending on infrastructure, education and other priorities. Republicans, however, object to the high price tag of Biden’s initiatives and critics have raised concerns about inflation and a disincentive, thanks to generous unemployment benefits, for people to return to the workforce.

The White House dismissed that criticism on Friday. Biden said he had not seen evidence that enhanced unemployment benefits were putting a drag on employment figures.

Jared Bernstein, a member of the president’s Council of Economic Advisers, told Reuters Biden’s COVID relief and stimulus package, known as the American Rescue Plan, had helped generate an average of more than half a million jobs per month over the last three months, April notwithstanding.

“Those are big numbers, and the fingerprints of the American Rescue Plan are all over those additions,” he said.

Bernstein said no course correction was required from the White House, a theme echoed by Nancy Pelosi, the Democratic speaker of the House of Representatives, who pressed for passage of Biden’s next legislative push.

“The disappointing April jobs report highlights the urgent need to pass President Biden’s American Jobs and Families Plans,” she said in a statement. “We need to take bold action to Build Back Better from this crisis by investing in our nation, our workers and our families.”

“Why is anyone surprised that the jobs reports fell short of expectations?,” said Republican Senator Marco Rubio of Florida on Twitter. “I told you weeks ago that in #Florida I hear from #smallbusinesses every day that they can’t hire people because the government is having them not go back to work.”

The share of Americans who are either working or looking for work rose last month, and the number of people who said they are not looking for jobs because of COVID-19 fell by 900,000 in April, Bernstein said, pushing back against criticism from some employers that the benefits had kept some people from returning to the workplace.

“Thus far, we don’t see a correlation between unemployment insurance benefits and lack of employment,” he said.

“What we do see is a lot of people who are still hesitant to go back to work because of safety concerns, care issues, schooling issues, and we’ll continue to watch this very closely.”