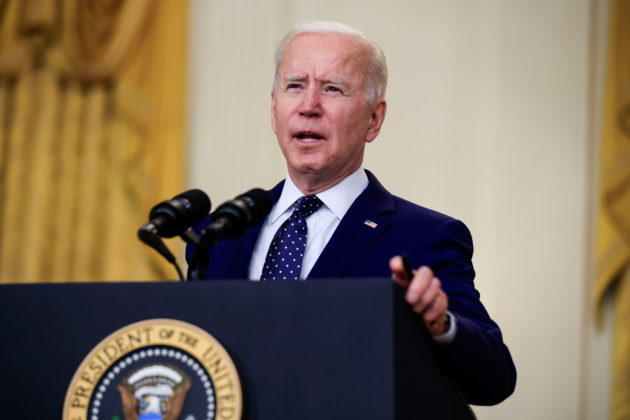 By Steve Holland and Mica Rosenberg

WASHINGTON (Reuters) -President Joe Biden signed an order on Friday limiting U.S. refugee admissions this year to the historically low 15,000 cap set under his predecessor Donald Trump, a senior administration official said, shelving a plan to raise it to 62,500 and drawing the ire of refugee advocates and some Democratic lawmakers.

The decision was a blow to advocacy groups that wanted the Democratic president to move swiftly to reverse the refugee policies of the Republican Trump, who had set the 15,000 figure as a way to limit immigration. The senior administration official, speaking on condition of anonymity, forecast “much increased admissions numbers in future years.”

Biden, who took office in January, had signaled two months ago plans to raise the cap to 62,500 during the 2021 fiscal year ending on Sept. 30, but held off on actually doing so.

The president’s decision appears to have been tied to concerns over the optics of admitting more refugees at a time of rising numbers of migrants arriving at the U.S.-Mexico border in recent months, and to not wanting to look “too open” or “soft,” another U.S. official with knowledge of the matter told Reuters.

Republicans have blamed Biden for the situation at the border, faulting his moves to reverse other Trump-era hardline immigration policies.

Biden pledged in February to increase the number of refugees admitted in the next fiscal year to 125,000.

Under the presidential determination signed by Biden, the United States will offer refugee status to a wider part of the world than had been allowed by Trump by changing the allocation of refugee slots, the senior administration official said.

The senior administration official said the United States would use all 15,000 slots and that officials were prepared to consult with Congress should there be a need to increase the number to address unforeseen emergencies.

“Biden promised to welcome immigrants, and people voted for him based on that promise,” Ocasio-Cortez wrote.

Stephen Miller, an immigration hardliner and White House adviser under Trump, said on Twitter that Biden’s decision reflects concern that border issues could lead to losses for Democrats in the 2022 midterm elections. Miller said he would favor “zero” refugee admissions.

Refugee advocates called the decision unjustified given that there are around 35,000 refugees who have already been vetted for security and cleared for entry to the United States, with a total of about 100,000 at various stages in the pipeline.

Refugee groups previously expressed frustration that Biden had delayed issuing the cap for months, which left refugees who were scheduled to travel stranded. Mark Hetfield, president of the HIAS resettlement agency, said around 700 flights were canceled due to the holdup.

“One can’t help but guess that they are conflating the refugee issue with what is happening at the border with the refugee program, which is a real disservice,” Hetfield told Reuters.

Refugees are processed differently in the U.S. immigration system than asylum seekers arriving at U.S. borders and ports of entry.

An increasing number of families and unaccompanied minors from Central America, many seeking asylum, have been among the those detained at the border in recent months. The refugee program offers a pathway for people to apply abroad to resettle in the United States. Advocates were dismayed by the small number of slots for Central Americans in the announced cap.

Refugee admissions reached historic lows under Trump, who portrayed refugees as a security threat and made limiting the number of immigrants allowed into the United States a hallmark of his presidency.

If resettlement continues at the current pace, Biden “is on track to resettle the lowest number of refugees of any president in U.S. history,” according to the International Rescue Committee refugee advocacy group. The group called Biden’s action “a disturbing and unjustified retreat.”

Sunil Varghese, policy director at the International Refugee Assistance Project advocacy group, said the initial goal of 62,500 might have been ambitious, but “symbolism matters” even if the United States was unable to meet the target this year.

“President Biden came into office promising to be an ‘ally of the light, not the darkness,'” Varghese said in a statement. “But to many refugees today, that light became a flicker.”

(Additional reporting by Ted HessonEditing by Will Dunham, Chizu Nomiyama and Jonathan Oatis)