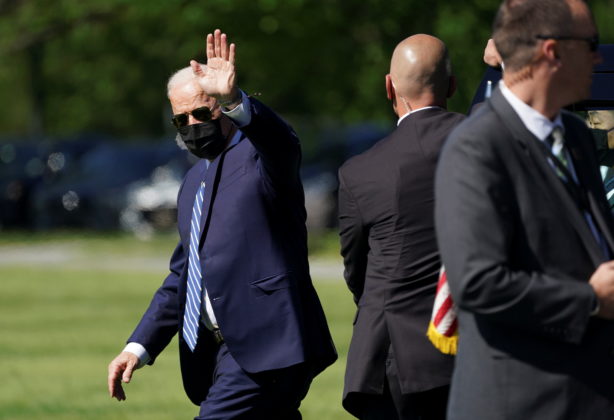 U.S. President Joe Biden waves as he departs for Louisiana from the White House in Washington, U.S., May 6, 2021. REUTERS/Kevin Lamarque

(Reuters) – President Joe Biden on Thursday will visit the Gulf Coast state of Louisiana, which has backed Republicans in U.S. elections for the past two decades, to tout his plans to invest in water and storm projects in cities that have been battered by hurricanes.

Biden, a Democrat, will visit both the decidedly liberal-leaning city of New Orleans, still scarred 15 years after Hurricane Katrina, and deeply conservative Lake Charles, a city of 77,000 with a major refinery and petrochemical plants, which was slammed by Hurricanes Laura and Delta last year.

The visits are the latest stop in the White House’s “Getting America Back on Track Tour,” to promote Biden’s $2.25 trillion infrastructure spending plan and a $1.8 billion education and child-care proposal.

Biden’s push to spend more federal money on schools, roads, job training and other public-facing projects, and tax the wealthiest Americans and companies to pay for it, is popular with members of both parties. But the plans face stiff opposition from Republican lawmakers.

The White House is betting trips like this will build public support for Biden and his spending proposals, even among Republican voters who backed former President Donald Trump, who continues to hold enormous sway over his party.

Biden plans to tour one of New Orleans’ aging facilities that houses water purification equipment and turbines for drainage pumps, which help pump out water during storm events. “Storm-hardening” projects that invest in dams and levies are a potentially popular idea in a Gulf Coast state increasingly threatened with extreme weather that scientists blame on climate change.

Biden is asking Congress for $50 billion to improve the resiliency of infrastructure nationwide, and additional support to help areas recover from disaster.

Congressional Republicans oppose Biden’s proposed $2.25 trillion in infrastructure spending over a decade, saying the higher taxes that would be levied on corporations to fund it would cost jobs and slow the economy.

Some Republicans have offered a far smaller package, $568 billion, focused on roads, bridges, broadband access and drinking water improvements. However, much of that reflects money that the federal government is already expected to spend for that infrastructure.

“I’m going to fight them every step of the way, because I think this is the wrong prescription for America,” McConnell said in an event in his home state of Kentucky last month. In the closely divided Senate, Biden would need every Democratic vote if no Republicans support the bill.

Biden brushed off the comment on Wednesday when asked about it by reporters at the White House. He recalled that McConnell said something similar when former President Barack Obama was in office, but yet “I was able to get a lot done with him.”