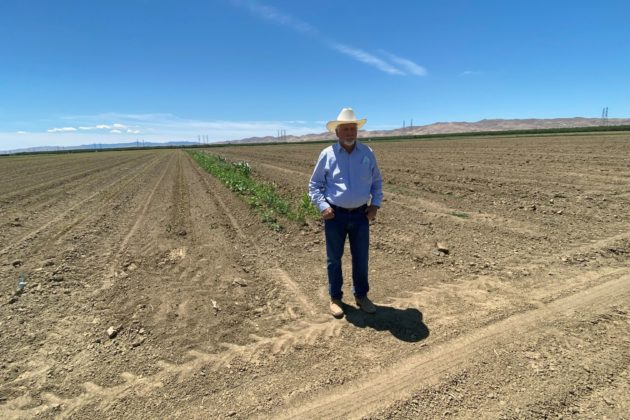 Farmer Joe Del Bosque stands in between a fallowed field and a newly planted field of melons in Firebaugh, California, U.S., May 25, 2021. REUTERS/Norma Galeana

By Norma Galeana and Christopher Walljasper

FIREBAUGH, Calif. (Reuters) – Joe Del Bosque is leaving a third of his 2,000-acre farm near Firebaugh, California, unseeded this year due to extreme drought. Yet, he hopes to access enough water to produce a marketable melon crop.

“We’re taking a big risk in planting crops and hoping the water gets here in time,” said Del Bosque, 72.

Agriculture is an important part of California’s economy and the state is a top producer of vegetables, berries, nuts and dairy products. The last major drought from 2012 to 2017 reduced irrigation supplies to farmers, forced strict household conservation measures and stoked deadly wildfires.

California farmers are allocated water from the state based on seniority and need, but farmers say water needs of cities and environmental restrictions reduce agricultural access.

Nearly 40% of California’s 24.6 million acres of farmland are irrigated, with crops like almonds and grapes in some regions needing more water to thrive.

“I’m going to be reducing some of our almond acreage. I may be increasing some of our row crops, like tomatoes,” said Stuart Woolf, who operates 30,000 acres, most of it in Western Fresno County. He may fallow 30% of his land.

Del Bosque, who grows melons, asparagus, sweet corn, almonds and cherries, said his operation could lose more than half a million dollars in income, and put many of his 700 workers out of work. He and other farmers say drought has been exacerbated by California’s lack of investment in water storage infrastructure over the last 40 years.

“Fundamentally, a storage project is paid for by the people who want the water,” said Jeanine Jones, drought manager for California’s Department of Water Resources. “All we can do is deliver what mother nature provides.”

“We simply don’t have enough water to supply our agricultural users,” said Conant. “We’re hopeful some water can be moved sooner than October, but there’s no guarantees.”

Water scarcity threatens Del Bosque’s watermelon crop, which is due to be harvested in August. But it also has dire consequences for those planting it.

“If there is no water, there is no work. And for us farm workers, how are we going to support the family?” said 57-year-old Pablo Barrera, who was planting watermelons for Del Bosque.

Woolf said as the state continues to restrict water access, he’s exploring ways to generate income off the land he can no longer irrigate, including installing solar arrays and planting Agave, normally grown in Mexico to make tequila.

“You’ve got to absorb all of your farming costs on the few acres that you’re farming,” he said. “How do we maximize the value of the land that we are not farming?”