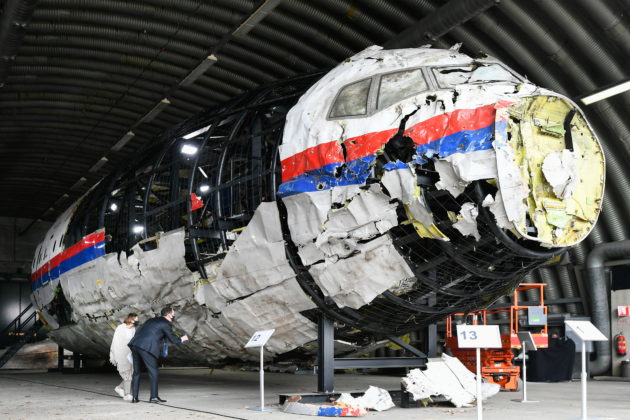 FILE PHOTO: Lawyers attend the judges' inspection of the reconstruction of the MH17 wreckage, as part of the murder trial ahead of the beginning of a critical stage, in Reijen, Netherlands, May 26, 2021. REUTERS/Piroschka van de Wouw/Pool

AMSTERDAM (Reuters) -Judges in the Netherlands will begin reading out the evidence this week in the murder trial against four fugitive suspects accused of shooting down a Malaysian airliner over rebel-held eastern Ukraine in 2014 and killing 298 people in 2014.

Victims’ relatives said they were expecting the testimony to bring up painful memories, but that they were grateful for a chance to hear at last what had happened aboard Malaysia Airlines flight MH17.

The flight from Amsterdam to Kuala Lumpur crashed in a field in territory held by pro-Russian separatists fighting against Ukrainian forces, after being shot down with what international investigators say was a Russian surface-to-air missile.

Three Russians and a Ukrainian citizen, all suspected of having key roles in the separatist forces, are on trial for murder. Moscow has refused to extradite those in Russia.

One of the Russians is mounting a defense from abroad and denies blame, while the others have not appointed lawyers and are not participating.

“It is a very difficult day for us. It is now the first day of the prosecution, and that is difficult for us,” Evert van Zijtveld, who lost his two children Frederique and Robert-Jan and his wife’s parents, told journalists as he walked into court.

After a year of mostly procedural hearings, judges announced the start of the evidence phase on Monday. From Tuesday the judges will begin summarizing the evidence gathered by investigators in the case, and potentially calling witnesses.

Judge Hendrik Steenhuis said his panel would be looking specifically to determine what type of missile hit the airplane, where it was fired from and whether the four suspects can be held responsible.

“It is taking a long time but we want to know the truth. It is the only thing we can still do for the children,” said Rob Frederiksz, whose 23-year-old son Bryce died along with his girlfriend Daisy in the crash.

After years of collecting evidence, a team of international investigators concluded in May 2018 that the missile launcher used to shoot down the aircraft belonged to Russia’s 53rd Anti-Aircraft Missile Brigade. The Dutch government holds Moscow responsible. Russia denies any involvement.

On Monday the Kremlin said it was following the trial and took note of “alternative information” that could lead to other explanations of the crash from the Dutch prosecutor’s main theory of the Russian-made missile fired by pro-Russian separatists.

“But again, because we are not part of the investigation, we cannot directly influence what is happening,” Kremlin spokesperson Dmitry Peskov told reporters.